Not Just A One-Knight Stand 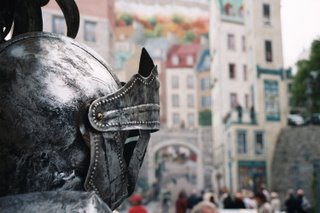 I guess you could say this was a clear case of a great knight out. If you're looking for a knight in shining armour, then Quebec City is the place to be.

I spotted this figure along a shopfront near the famous mural, which is a five-storey, 3D painting on the side of a building near Notre Dame. The mural depicts several people who made their mark on the history of the province, including Jacques Cartier, Louis Jolliet, Samuel de Champlain and Lord Dufferin.

Because the spot is so popular with tourists, it is hard to get a clear, unimpeded photograph of the mural, but I did succeed in getting a couple. It is an intriguing place, even for those who have no idea of the area's rich history.

Reminds me of the little-known story about how the noble Sir Lancelot was opposed to shoddy commerce in the days of Camelot. Someone proposed that King Arthur raise revenue by introducing a kissing booth, manned by the best-looking blokes from the Round Table. But Sir Lancelot veteoed the concept, saying: ``No one would pay for a one-knight stand.''

``I drool with unabashed envy at your literary accomplishments.''
Peter Moss, MBE,
Hong Kong-based author of `The Singing Tree’

``My word, you are getting good PR. How are sales going?''
Mike Bruce, Mexico

``I am reading your book very thoroughly and finding it interesting. Billy Cooper, Mrs. Ghosh, Ismail and other characters are coming alive in my mind.''
Satyapriya Sarker, New Delhi

``You are definitely one of earth's gifted and talented!''
Jayne Herbert, Perth, Western Australia (a kindergarten classmate)

``I parted company with a friend a couple of weeks ago. Actually, several friends. Harry and Kelvin whom I met only briefly, Frank and Wally, a knockabout double act that also didn't tarry long, and there was Steve and Hilary and their sons Clive and Azam with whom I developed a long-lasting relationship. The sense of loss was almost tangible.

``The reason we went our separate ways was that I finally, reluctantly, closed the back cover of the book `Vegemite Vindaloo’ by David McMahon, but not before I returned to page one to speed-read the first chapter. I just had to make sure that I had correctly assimilated precisely how and where and with whom I had started this memorable journey . . .''

That's One Small Stop For Man

One Giant Leap For Mankind 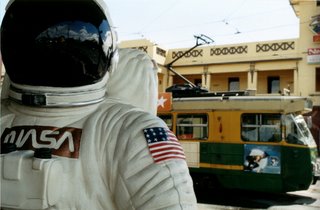 The astronaut and the Melbourne tram. Photo copyright: DAVID McMAHON 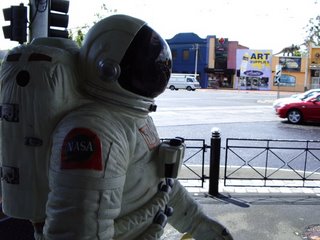 You never know where you'll bump into the reclusive Neil Armstrong. But I didn't expect to see him near the tram stop at the corner of Dandenong Road and Derby Road, in the Melbourne suburb of Caulfield South.

You could say it gave me quite a buzz - if you'll pardon the expression.

Speaking of which, there's no Buzz Aldrin or Michael Collins, just the Apollo XI commander, the first man on the moon. I've got some questions for him.

I'm keen to ask him about the kerfuffle last year, when he found out his long-time barber had actually done the unthinkable and sold locks of his hair.

The second question I want to ask him relates to the fact that, as mission commander of Apollo XI, he had to fill out a Customs declaration form on his return. According to some reports - and you can view the Customs manifest on the internet - Armstrong wrote, in laconic fashion, ``Cape Canaveral'' for the journey's departure point and ``Moon'' as his destination. Maybe, instead of filling out the Customs manifest, he felt the urge to moon them instead.

All these and so many more questions for the iconic astronaut.

But it turns out that it's not the real Armstrong, just a lifesize fibreglass figure of the NASA astronaut, in full flight suit and reflective helmet. And it's for sale, for a mere $1500.

I drove past there again this week, to see if the figure was still for sale, but it had been bought. I just hope the person who purchased it has displayed it properly.

As we all know, every astronaut needs a bit of space.

`Vegemite Vindaloo' - the view from Perth

Jean Anderson's viewpoint might perhaps be one of empathy on many levels. She grew up in Calcutta and is a distinguished alumnus of St Thomas's School, one of the places described at length in the novel. Jean's father was also vice-principal at the same school. Jean now lives in Western Australia, so she can also see the tale from a migrant's point of view. She claims never to have heard the language used by Frank Walker and Wally Bennett in the Jindaroo Creek chapters!

It took me a little while to get started on your book, but once into it I couldn't put it down until the last page. It's been a totally engaging experience reading it, and I congratulate you on your magnificent work.

You've created a marvellously insightful panorama across the two cultures in a way that will surely resonate with migrants of all persuasions - but especially the Anglo-Indians; and the family story threading it all together kept me captivated. I have been carried along with the triple journey motif (in bullock cart, train, jet etc, etc) and your characterisations of the people who pop up along the way (Biplab, for instance -- brilliant -- and the Aussie mates in the outback!).

You have a Dickensian touch in the story of Ismail and Zarina (and Sailen Nath Benerji) - it brings alive the utter pathos that oozes out of the Kolkata kerbstones, and yet you manage to wring some hope and goodness out of all the grime and crime. And then you provide a nice counterpoint with the comedy at Jindaroo Creek.

Your treatment of the social dilemma faced by Steve and Hilary will raise some interesting discussion points for your readers (another dab of Dickens!). Is their adoption story based on some real experiences you've witnessed?

Well, my boy, you're right up there with the best of the post-colonial writers. To sum up : it's a bloody good read!! (See how you've influenced my use of the vernacular...)

This is the dawning of the age of Aquariums 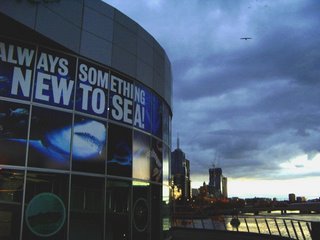 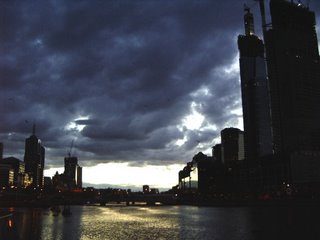 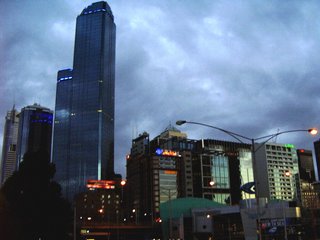 Melbourne is an amazing city to photograph - at any time of the day. The nuances of light and texture are never the same.

These pictures were taken at dawn on a winter morning when the temperature was about five degrees.

The first of the three frames shows the Aquarium, a fairly recent addition to the city, where it is possible to swim with sharks. Probably the highest-profile celebrity to take on that challenge was Formula One driver Ralf Schumacher, before the Melbourne Grand Prix about three years ago.

The second and third pictures were also taken from a little further along the bridge. The second shot is taken while looking across the Yarra from the Aquarium, as the early-morning light formed a shimmering expanse of silver across the river, contrasting with the gray slab of cloud above.

The last of the pictures shows the Aquarium, with part of the skyline in the background, including the famous blue tower called the Rialto, where the viewing deck provides a stunning vista across the city and suburbs.

And while on the subject of Aquariums, why didn't Hollywood think of the simplest title for the film `Finding Nemo', about the adventures of a clownfish - they could have just called it `A Fish Called Wander'.

Posted by david mcmahon at 2:00 PM No comments: 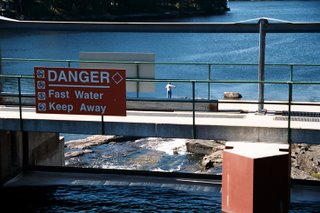 The photograph above was taken at Bala, a picturesque little town in Muskoka, northern Ontario. It was mid-afternoon and the weather was perfect. The light was good, the water was blue, the waterfalls were a cascade of frothy white foam. And the bold red sign, with the clear warning, was just another contrast to a serene scene.

But there is another reason I took the photograph. It seems not everyone heeds the warning sign.

Have a look at the picture below, which is a closer crop of the same image.

How do you rate as a hawk-eyed detective? Did you notice the recalcitrant fisherman in the first image?

Hope he caught something - apart from a cold! 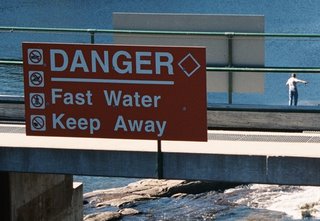 Posted by david mcmahon at 4:49 PM No comments:

I have finished `Vegemite Vindaloo' and I loved it! I'm not just saying this, because I feel obligated to or something, but I really enjoyed it!

There are books that I buy for my friends and the one I usually buy is by Alexander McCall Smith, "2 and a Half Pillars of Wisdom". It's a really fun book. Well, I think `Vegemite Vindaloo' will also start featuring on my gifting list now ... it's wonderfully warm and funny and sad and I really liked the end!

Steve Cooper sounded a bit too good to be true, but fortunately I have met some really nice people like him, so I do believe those sort of people exist! What I loved the most was the character sketches ... each of them was so full of life. There were so many characters, like the corrupt Customs officer or the small-time crook, who you could just have named and described the events around them, but by drawing them out in such detail they just added a whole new dimension to the story...I absolutely loved it!

The little bits about Air Force life were very accurate as well!

I plan to gift my aunt a copy ... she lives in Melbourne. I think she migrated there about 25 years ago (not sure, but around that much) and I think she'd really enjoy it!

Well, thank you for a really enjoyable read ... I've passed it on to my boyfriend, because he felt terribly neglected while I was reading it so he's decided to see what was so gripping!

Just A Couple Of Blocks Away 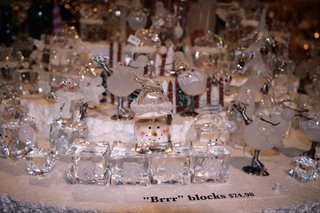 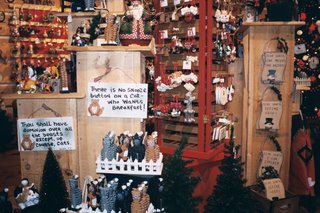 These pictures were taken in a shop called `Christmas Tyme', on Main Street East, in Huntsville, Ontario. I'd never seen anything like the ``Brrr blocks'' in the top picture. As you can see in the second shot, there is nothing like a bit of humour at Yuletide. One of the little signs says: ``Dear Santa, leave presents, take brother''. Another says: ``Dear Santa, define good'' and a third, with the benefit of hindsight, declares: ``Dear Santa, I can Explain''.