Must Be Time For The Mardi Grass 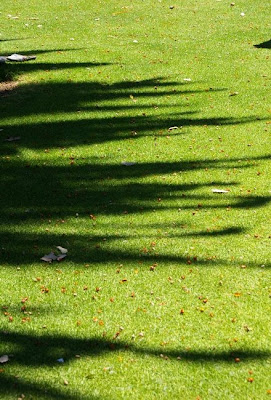 This shot was taken in the first week of January, while we were on the west coast for a family wedding. Kings Park in Perth is a place I had first read about as a child, and as this was my first visit to the west, I was determined to spend some time there.

It was a scorcher of a Sunday and even though I sweltered, I shot about 100 images during our brief stay in the 400-hectare park that is named after King Edward VII. We were actually on our way back to the car when I spotted this shadow of a huge palm tree.

Even as I marvelled at the fresh green grass that was so different from our scorched earth here in Victoria, this sight caught my eye.

Emblazoned on the billiard-table green parkland was the perfect shadow of a towering palm tree whose fronds were being caressed by the breeze. Because it looked as if it had been stencilled onto the grass, I had to pause for a few seconds while I lined up this shot.

I guess it might seem like an easy image, but I had to position myself very precisely to compose the shot so that it did not include any of the many people soaking up the sun while they lay on the grass.

Judging by this photograph, you might think the park was deserted, but believe me, it never is. The official website of the West Australian government shows that it attracts more than five million visitors a year. That might not seem like a lot to North Americans – but five million is a quarter of our national population.

The composition makes it look like a crowd cheering along the side of a golf tournament.

Thats a bright green for Perth in the summertime. And some welcome shade in 40 degrees.

I do love photography, but know nothing about it's technicalities except that no matter how many clicks I shoot, nothing ever comes close to any thing like this. With your narration of the difficulty in shooting such (as this particular) photo, it is indeed a great picture. One may have seen these tree shadows in real life, but a picture so true to reality is a unique one.
If/when you find some time pls visit :
The Songbird's Nest - Nature's Miracle @ innerfeelings blog.
Thanks.

I miss green. I'm seeing a tiny bit of it in the grass and trees, but we're still very brown-yellow here.

Nice to look at it. Great shot.

I love it! You a master composer of shots.

Lovely photo - although I know exactly zero about photography.

And after all the cold and wet of the Pacific Northwest, even the scorching sun of Australia is sounding pretty good.

This was a really good photo with dramatic qualities.
Wouldn't have guessed there were lots of people around or that the weather was so hot.

As always, you and also Rune, never cease to amaze me with your photographs. Although your choices and the way you manage your shots and the detail in which you describe how you found and got those shots too are sometimes even more amazing than the pictures themselves. Great work, David -on all counts.

It looks like a cool green oasis. I am sure that that tree would be welcome company on a hot day!

Took a photo of my shadow as I was walking Milou this afternoon, then deleted it 'cos who wants to look at shadows. Then I saw this one, and matched to your dreadful fun and said boohoo. I shall try again tomorrow.

I just love the simplicity of the shot and how much you can get out of it.

Learning a lot from studying your photos, David. The main one is to look for something else other than the picture itself before shooting.