Yes, This Huey Does Sometimes Get Dewy 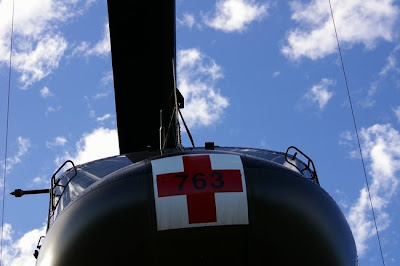 Familiar sight, isn't it? But you can relax - I didn't risk life and limb to take this shot of a Huey chopper. Sit back and let me tell you the story ...

I was driving through Dandenong, in southeast Melbourne - and I had a few minutes up my sleeve. As always, I had my Pentax K100D on the passenger seat beside me and I thought it would be the perfect opportunity to shoot a quick series of photographs for Sky Watch Friday. 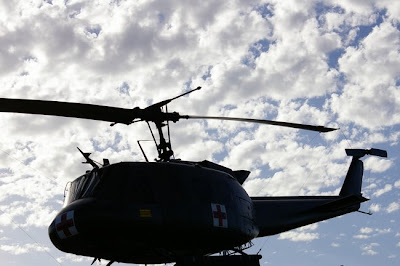 This UH1H chopper - known universally as the Huey - looks fairly dramatic in this shot against the late evening sky, and I thought it would be the perfect way to honour the many people who served in Vietnam. Among my blogging friends are several who did a tour of duty in Vietnam, so this post is for them. I don't need to name each one. They know who they are. 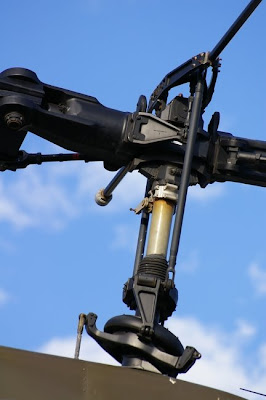 Yes, the chopper looks as though it was hovering above my head, but there's a very interesting background to this photo essay. The chopper is actually a static display. Look carefully at the first frame and you'll see a slender wire on each side of the fuselage. The wires serve a specific purpose. They hold the main rotor securely in place, so that it doesn't spin in the strong breeze.

If you pay close attention to the second frame, it seems like I've got the balance of the subject completely out of kilter. But I've framed the shot deliberately, to make the best use of the silhouette against a patchy sky - and also to reveal, at the bottom of the shot, the metal framework that supports the chopper a few metres above the ground. 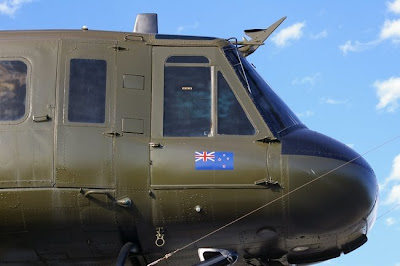 Here in Australia, we have a veterans' organisation called the Returned Services League, or RSL. The Huey is the centrepiece of a Vietnam memorial that was unveiled on 30 April 2005, the anniversary of the fall of Saigon. The chopper was donated by the US Army and, as newspapers reported at the time, the Dandenong RSL paid $120,000 to have it shipped halfway across the world.

Below the helicopter is a sculpture by Melbourne artist Lis Johnson. The sculpture is called Side By Side and if you look at the photograph below, you'll understand how it gets its name. Civilians aren't very good when it comes to producing snappy salutes, but this is my way of doing it. For other participants in Dot’s concept, go to Sky Watch Friday.
Posted by david mcmahon at 5:22 AM

Thank you David for giving us much more than a sky shot today... I find this of great interest.
I will now post your links as Sky Watch is 'Blowing In The Wind' as I write this...
Tom

I'm like Tom says ... not only you give us some more great photos about a Huey Bell but also some very good info.
And I also liked the last photo.
Very touching.
I would also like to thank your kind comments and visit to my blog.

This post is a tribute to all the veterans of Vietnam, my husband among them. (Though he would hate my saying that...whenever there's a Veteran's Day or Memorial Day tribute in church, and they ask all the veterans to stand, he never does.)

It sounds like your friends possess that same dignity.

That's a lovely way to honour those who served. Wonderful images and background information.

This is a wonderful tribute. My uncle served in Vietnam.

That's really something, David. That's one heck of a machine. Glad you had those minutes up your sleeve!

wonderful!!!!!
It was very touching.

Glad it was standing still for these. What a great story and tribute to go along with your sky this week. Enjoy your day with your camera by your side! :)

The Huey has a distinct sound; you know it well before you can see it …
They fly over our farm often on maneuvers…
Great pictures,

Speaking for my Sweetie, also a veteran of Vietnam Thank You

Wow! fantastic shots! mine's up too hope you can drop by.

Thanks for the tribute David. Although I never got/had to ride in one or even guard one, I do understand that the Huey will always be the most recognized symbol of the war in Vietnam.

I watched them left off at Da Nang with prisoners on board, fly out over the China Sea, and return empty. Some say it was a way of interrogation - ask a question and if no answer shove one out and the other spills his guts, but I was never aboard to witness this. Sounds fool proof to me though!

So we can say they saved countless lives in more ways than one.

LOVE that first shot!
Always a treat to visit here.

Marvellous post, with beautiful photographs and with a lot of information!
Nice weekend!

oh how this bring back memories of our military days. As usually your postings are very interesting.

Taking your camera everywhere certainly works for you. I bet I pass up great photos all the time. You seem to see them everywhere!

wow how militaristic is your post today, but it is amazing how beautiful can be also technical stufff.....

What shots you produce, fantastic.

I had noticed the wire in the first shot but assumed it to be part of the helicopter. I didn't notice the rest!
A very interesting post - and an interesting sky!
I love the statues in the last shot, and the title of them.
It says it all.
Thanks for this.

Cool photo of the chopper David! I think I'm done with my blogging break!

I like them all. Wonderful photos, but the last one was very moving.

David: Great post and great pictures. I bow to the master from Aussie Land.

this is EXACTLY the way i have displayed *my* helicopters out the back. you do NOT wanna get those propellers going on a windy day. someone could lose a ... well a whole someone.

sadly, mine has no statue underneath. that's maybe a project for next weekend. i'll see what the kids can do with some playdoh.

What a really great post and a wonderful tribute to the Vietnam veterans! Your photos are always very special.

I've been in a helicopter once when I was a teenager.

Thank you for a great story and great pictures.

I'm always learning new stuffs here. Thanks for sharing all these information and history. I like the last statue, it has got this sad and united feel in it :)
Happy Weekend David.

I enjoyed this post, as well as your photos... Someone I hold very dear did two tours in Vietnam...

my SWF is up at
http://prairievisions.blogspot.com/

Amazing shot, as usual, David. But most of all, I appreciate your honouring all those vets who served in an atrocious war. Your photos alone always tell a story, but this time the photos needed a few words to go along with them. Those words and photos are a wonderful tribute.

Great info, wonderful photos. A very nice post. Thanks for sharing with us.

I love your take on this week's Sky Watch. Your post was very touching. You did produce a snappy salute.

what a nice shot of the chopper and the sky. And some interesting information.

This is a great post. The Huey looks great with those clouds above. A nice tribute to those who serve and have served.

you have some wonderful photos!

Great photos and an excellent tribute.

That chopper sure does look impressive! I like the second shot best, it looks almost as if the machine's in the air and bearing down on you!

Thank you also for the tribute to those who served. It is important for us to remember them, and this is certainly an appropriate place to do so.

yeah, me too! I got a lot of catching up to do!

Have a wonderful weekend.

Absolutely fascintating post David. Brilliant photos, can't wait to show them to the farmer later - he loves helicopters. We have an RAF base not far from here where the Rescue Helicopter is kept. It is a huge yellow effort as it flies incredibly low over our farm house. I will blog about it one day, you have once again inspired me!

HI ,
Increase your revenue 100% of your blog by converting into free website.
Convert your blog "yourname.blogspot.com" to www.yourname.com completely free.
Become proud owner of the (.com) own site .
we provide you free website+ free web hosting + list of your choice of
scripts like(blog scripts,CMS scripts, forums scripts and many scripts)
all the above services are absolutely free.
You can also start earning money from your blog by referring your friends.
Please visit www.hyperwebenable.com for more info.
regards
www.hyperwebenable.com

Wow cool David You got some great shots today, and a different perspective.. I caught the fighter jet picture I posted today they are related . I also love the last one.

That's an AWESOME angle, on that first pic! Made my neck-hairs stand up! If you were "in-need", that big red cross was the prettiest site one could ask for!

Indeed, as many others have stated, the Huey has it's own distinct sound---one that you'll never forget.

But at least this one is now in a more peaceful setting. Thanks, ya' down-under dude.......!

Great shots, and a nice tribute :) Have a great weekend :)

What a great twist on skywatch. I always enjoy your site. Mine is a bit metaphorical this morning.

What a great tribute to those who served. I loved the first shot, and thought that the sculpture was great.

Nice tribute and great photos! Have a good weekend David.

Awesome photos as always David! (and wonderful information to go along with them)

Excellent photo tribute and essay to those who served. Thanks for sharing. Beautiful sky too!

David I'm blown away with this incredible post! Just marvelous! :)

David this was just awesome! What wonderful photos and I too really like the last picture. Very touching!

We have a helicopter like that downstate and I always mean to get down there to take photos and never do. These are great shots.

Anonymous said...
This comment has been removed by a blog administrator.
12:54 AM

Anonymous said...
This comment has been removed by a blog administrator.
8:31 PM