Out Of The Blue

Anyone Can Be Street Smart 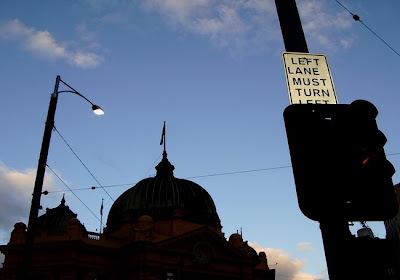 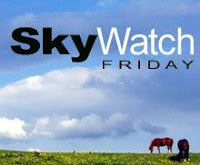 As a rule, I don’t generally put old shots on my blog, but this one is for the benefit of the many bloggers who ask me if a little compact camera can produce a shot of comparable quality with a more expensive DSLR (digital single-lens reflex) camera.

Many of my favourite shots are images that I took years ago, with a simple, cheap Instamatic Ricoh. The camera lens is nothing more than a connection to your eye, and the shutter mechanism is simply an extension of your brain.

I’ve always said a writer doesn’t need a $10,000 computer to write well, so the same logic dictates that you don’t need a $2000 camera to take great shots.

The little compact digitals have made cumulative leaps in technology in the past five years and while you get a lot of bang for your buck in the under-$400 range, one of the best I’ve used is the 10-megapixel ultra-compact Pentax Optio S10. Since I first used it around Easter this year, I’ve recommended it to several bloggers on the basis of its compact size, its many features and its macro function. More to the point, it retails for between $200-$250.

For example, this shot was taken in mid-2005, with a simple, basic early-model compact. I was walking down Flinders Street before dawn (as you can see by the illuminated street light) when I took this shot. I was facing west, where the sky was blue, but behind me to the east the sky was covered in black clouds.

The silhouette of the distinctive dome of Flinders Street Station was perfect to emphasise the blue wintry sky. Look carefully at the shot and you’ll even see proof that there was just a gentle zephyr of a breeze - the flag at the top of the dome is almost limp.

And while the over-riding sensation of the photo is blue, black and white, can you spot the sliver of red in this low-resolution version of the original shot? Need a clue? Look at the traffic light on the right - and depending on your screen resolution, you’ll glimpse a whisper-thin hint of red.

Just to prove my point, it was a simple three-megapixel camera, but it gave me a wonderful, crisp image.

What’s under the hood doesn’t matter. It’s how you use it. 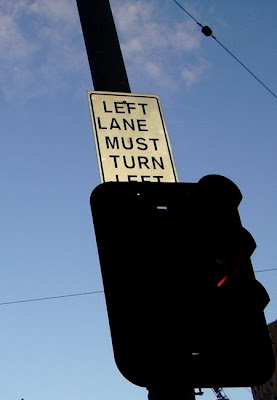 You're right! The reason I was willing to finally go digital was because we were getting great pictures on my husband's point and shoot. I opted for something a little nicer, but he still gets great pictures on it. (Even better when I'm behind the lens!)

I'm still working with 2.1 megapixels. Perhaps there is hope for me yet! :-)

Thanks for the encouragement to those who use 'regular' digital cameras. You are true to the words in your blog banner, David.

I would say it does matter what is under the hood. There has to be a reason that some of Canon's cameras sell for several thousand dollars without a lens.

I remember a newspaper photographer was here, not that long ago, and his three cameras cost over 12 thousand dollars.

I have some point and shoot cameras that do a great job too but they have many disadvantages over the better cameras.

yep...it doesnt matter if the digicam cheap or expensive. It is the person who can create a beautiful shots or not :D

My SWF : Up and Down Thanks

I agree a hundred percent with you, David! I tell anybody who asks me (and even those who don't want to hear it *smile*) that today's compact digital cameras can capture images that betray their humble makers. While digital DSLR are marketed to consumers as if they can outshine the much cheaper compact ones regardless of the skill of the photographer, I see them oftentimes as more in the way than fostering the joy of photography to the more casual, and even the more accomplished photographer.

I still get bangs of nostalgia and heart flutter when I look at my little Sony Cybershot, which I abandoned only a few months ago. Her exquisite Zeiss lens, in my opinion, can compete with my Nikon every day.

One of these days I shall buy myself another compact, just for the fun and joy of using it. Among other reasons, her low light capabilities beat my Nikon's, and a small compact is less intrusive than the SRL, making candid shots easier.

Thank you for sharing your experience and insights!

Oh dear,
I swear that what I get are "pangs" and not bangs (I already got those!). Sorry.

everything i post is done with a point and shoot. i've been thrilled with some of the results, but i'd still love to get something with some really good macro. but i did feel good when a pal of mine who was just starting a photography business told me he was envious of a few of the shots i had gotten. he thought they were beyond the capability of my camera and the sorts of things he spent a lot of time trying to capture with his cadillac model. hehehehe.

many users think that a dslr camera will produce great photos by itself, and they cannot use any function beyond the green automatics or maybe one of the preset automatics, and they are usually disappointed by the results. for an average family photographer point and shoot is still the optimal choice but a dslr can open whole new horizons if one is not afraid to experiment :)

i still use both

So you're saying it is NOT my camera's fault that I suck at photography? Dang. ;)

Although, I'm not sure that a cheap digital camera could stand up to a 50mm f/1.4 lens, but that lens is all I have on my mind right now :) This photo is really good, though, great job :)

You're RIGHT. It IS how you use it.

I had a workshop with a professional photographer earlier this summer, and probably two thirds of the group in attendance were using simple point and shoot cameras. Having presented the workshop before and realizing that he had spent too much time on technical, this session emphasized composition, light, depth of field, etc.

The instructor suggested that most of us ought to upgrade our equipment, and I left contemplating my budget. Thinking about it later, however, I realized that, although he would be terribly frustrated with the limitations of our point and shoots, It is a far far better thing to have a simple camera that you understand thoroughly than to have a sophisticated one that you don't know how to use.

I went home and downloaded my owner's manual.

I think I already told you I love my little Sony camera. I needed something small and compact because I travel light even just traveling around my neighborhood. Good post!

Really neat shots! I got some great shots with my old cameras, well before I moved on to my current Nikon D200.

It's not the camera, but the talent behind it that makes the photo.

My photos seem to blow no matter which camera I use, so I think . . . you're right.

Great photos, by you.

I love your caption!

I agree with you that one does not really need expensive cameras and lens to capture beauty. All my shots are captured using a compact, and I'm loving it.

But than again, of course who wouldn't mind a cool DSLR? heehee...

Yes, I saw red!
Was a good contrasting photo.

I use a point and shoot all the time, but I also shoot a Canon 5D. Both have their places, but the P/S is so easy it sort of makes up for its weaknesses.
Cheers

"The camera lens is nothing more than a connection to your eye, and the shutter mechanism is simply an extension of your brain."

For me, the best thing about snapping pictures is what it does for my 'eye.' I see things better.

Wonderful post and you made me feel so much better! I recently took a trip down to my local camera shop to get an education in digital SLRs and the hybrid or bridge cameras. I had no idea of the range - or range in price! I have seen some great photos from small cameras and I love the Optio S10 for it's macro ability - a new world to me.

The camera is returned repaired now, but alas, no explanation from the manufacturer as to what was wrong with it or what needed fixing. So, none the wiser.

Thank you for the nice comments on my site. Your pictures are amazing!! I am having fun going back through your posts to see everything!!
Take care and thanks again!!

All of my photos are taken with a little Canon. I do hope to get an DSLR for Christmas though ;O)

And .. did that left lane ever turn left as directed? Its all about - IMO - the eye behind the viewfinder ...

You know, I just realized after reading Daryl's quip, that that isnot a sign you would likely see in this part of the world.Instead, we have Right Lane Must Turn Right.

It helps to have the "eye" to see the picture for the camera lens to capture. I am sure trying to work on my "eye"! Yours is great!

Sorry, I’m a little late because I was sailing this weekend.
So I stop by and say thank you for a nice SWF.