A Is For Australia

Your Sons Have Different Nationalities, Ma'am? 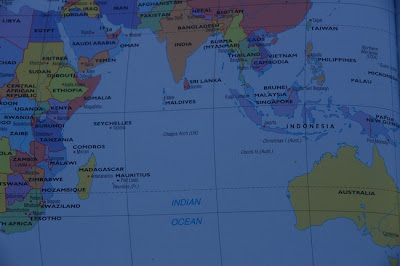 One of the funniest examples of family-related geography took place when I was fourteen years old, in my second-last year of boarding school at St Joseph's College, Darjeeling – the school famously known by its compass orientation, North Point.

I should point out that there is a substantial age gap between my three older siblings and me – Keith, Michael and Brian got a head start of fifteen, twelve and ten years respectively. Because my brothers were in boarding school, I only saw them for three months each year. By the time I was six years old, each of them had left the family home, Keith and Brian to join the merchant navy and Michael to become a fighter pilot.

Keith then lived in England for a while before moving to Australia, where he eventually took on Australian citizenship. Shortly after I started Year Ten, Keith returned to India on holiday, travelling on an Australian passport.

As Brian just happened to be in Calcutta at the time, it was decided that he and our mother would travel to Darjeeling with Keith. But because Keith was now a ``foreigner’’, he had to get special permission to visit Darjeeling, and the necessary paperwork was completed without a hitch. Once they arrived in the beautiful Himalayan town where my school was situated, it was decided that they would spend a day or two extra – which in turn meant that Keith had to apply for an extension.

While I was in class one morning, Mum and Brian accompanied Keith to the official who would review his case. They explained they just wanted a couple of extra days because they were spending as much time as possible with me while I was at boarding school. Very efficiently, Keith was given permission and the necessary paperwork was completed.

As Mum, Brian and Keith got up to go, the official very politely stopped Mum. He wanted to know if he could possibly ask her a ``very personal’’ question. Mum, who was never flummoxed by unexpected roadblocks, told him to go right ahead.

Clearing his throat, the official cut to the chase. ``Madam,’’ he said, ``how is it you have one Australian son but your other sons are Indians?’’
Posted by david mcmahon at 5:28 AM

Labels: A is for Australia, ABC Wednesday, Darjeeling, North Point

awwwwwwww..whatever did your lovely mom say my friend?

Too funny! That reminds me of my sorority sister, a Caucasian American. Her parents had adopted two Korean children. She had a picture of herself and her two siblings in her dorm room and somebody asked her if she was adopted. Too funny!

How strange we find situations which are out the sphere of our own knowledge and experience! Too funny!

Loved your story. People's assumptions always make for the funnies.

After several mis-steps because I'm not too observant, I was able to follow your directions. Thanks.

Nice one David. It's stories like these that spice up life.

Great story ... btw how did Mum answer? You've given me a new vocab word for the day: flummoxed ;)
thanks!

A for Australia - obvious really (I haven't seen A for America, though...). Great story - I must say you could have told us what your mother said. Good come-backs are always of value!

A for Australia was a good choice and that was a delightful little story!

hahahaha, what a funny story. thanks for sharing that.

A for Australia. Of course! :)
Nice story. I can understand the Official`s confusion.... ;)

Now that's a great story David...you have so much material you could fill several books just about you and your family!

Most of us will never experience or even understand living in multiple countries. I for one, would never be comfortable with that kind of travel.

Loved your story and I loved my visit to Melbourne a few years ago!

I will have to check it out. Thanks for the tip!

Good story David and I also want to know what your Mom said to him?

Many years ago on a trip to the former USSR a customs official asked a very straight laced, conservative lady co-traveler if she had any pornography in her possession. The customs official and the lady directly involved took this very seriously but it was quite a hoot to the rest of us!

Have a Blessed Happy
Creative Year!!!

Oh man...I just love your stories and this one is particularly cute!!! A very good "A" post....but then you are a very creative kind of guy!!!

:) Nice post David, brought a smile to my face --would like to know just what your Mother's answer was.


Have you ever hung by a thread?
visit my blog and see.

Now that is certainly an honest but very funny question! LOVE this story!

I wish YOU would write an autobiography... I would love to read about your upbringing and foreign country existence.
I have an Indian workmate and I am loving learning about her native country. She brings wonderful home cooked food every day, and always shares a bite with me.

That's funny.
What was your mom's response?

David,
We would love to hear your mum's response... What great humor to carry on through the generations. :D I can imagine what was racing through your mum's mind. What IS than man thinking!

David, you offered to give advice to me on my Nature Shows and Dreams blog. Could you email me at jj_loch @ yahoo.com?

Remove the spaces. THANKS! I have a NZ and several American cps but am always open to suggestions.

that is such a cool story!! how did your mom explain that one?!
you don't mind if i put you on my "to stalk" list, do you?
have an awesome evening? morning?

LOL, isn't is just prudent that customs officers have manners "back in the day".
This story is delightful and insightful. thank you for sharing a little more of your background and family with us.
Definitely an *A*.
Peace, Kai :)

Love to confuse those Burea-rats! Even good ones! Great story David.

David this is in fact very interesting childhood story, and twist too, I probably would the ask the same, lol. Thanks for sharing and thank you for recent visit to my blog. Anna :)

I love your stories. Great A for you. I'll bet that wasn't a hard choice.

That is a great A and a great story.

It reminds me of our trip to Russia. On our way to visit our son, who was studying in Siberia (a story in itself) we arrived very late at night in Moscow after a long and late flight. The representative of our travel agency who met us got us settled into our hotel and oriented for the upcoming day and our departure east the following evening. Once all the formalities and details were settled, she pulled me aside and asked: "and for heavens sake WHY are you going to Siberia?"

My dgrd has duo citizenship even
though she was born in Sweden. Her
mother is Swedish and my son from
the US. If my dgrd would of been born here in the US her birthdate would be the day b/4 the date that it is on.

Oh, also I forgot to say.
Both my dsil and dnph had
to apply for US citizenship,
when they were old enough to
do so, even though their
parents were US citizens.

Your mum should have said; I am an international Mom man!...A world Mom in hindi we have a phrase jagat mata...actually meant for goddesses.LOL