La, A Note That Follows Sew 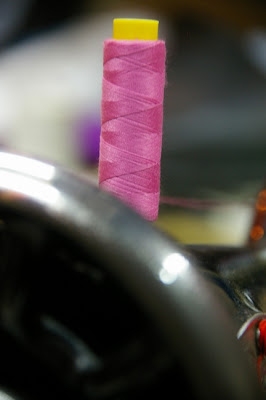 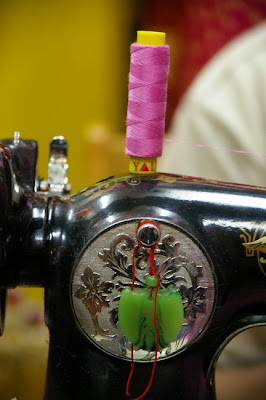 In this shot above, does anyone know what the green object is? I don't have a clue, and I'm hoping you can help. 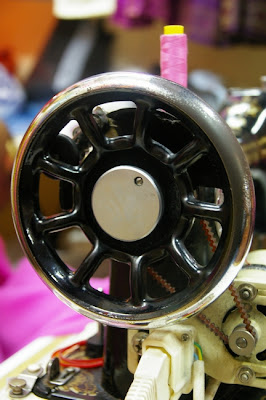 And if you look carefully at this image (above), you'll see a makeshift pulley attached to the wheel. Look to the right of the frame and you'll see what I mean. Instead of using a treadle, the man who was using the Singer told me that it had been modified to run off an electric motor. 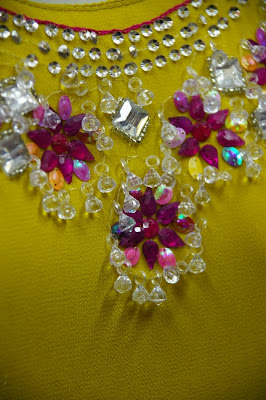 Finally, I thought I'd leave you with an example (above) of some of the work the man was producing. Pretty intricate, don't you think?
Posted by david mcmahon at 8:54 AM

The green looks like a piece of jade. I got the following from: http://chineseculture.about.com/cs/history/a/JadeCulture.htm

'The wise have likened jade to virtue. For them, its polish and brilliancy represent the whole of purity; its perfect compactness and extreme hardness represent the sureness of intelligence; its angles, which do not cut, although they seem sharp, represent justice; the pure and prolonged sound, which it gives forth when one strikes it, represents music. Its color represents loyalty; its interior flaws, always showing themselves through the transparency, call to mind sincerity; its iridescent brightness represents heaven; its admirable substance, born of mountain and of water, represents the earth. Used alone without ornamentation it represents chastity. The price that the entire world attaches to it represents the truth. To support these comparisons, the Book of Verse says: "When I think of a wise man, his merits appear to be like jade."'

Thus jade is really special in Chinese culture, also as the Chinese saying goes "Gold has a value; jade is invaluable."

In your previous post, I love your photo of the fabric - silk, right?

And, I too, learned how to sew on my mother's beautiful Singer treddle sewing machine. When it was closed up it looked like a beautiful desk.

i just love the intricate designs ON the sewing machine. once upon a time these were intended to be both functional AND beautiful. also, as old as it is, it still works and even has been adapted from treadle to electric. although we can now buy machines that thread themselves and hold dozens of computerized stitch designs they are not lovely to look at and i seriously doubt any of them will still be functional in 100 years.
'
that green thing looks like a piece of jade like leslie said. what its purpose is escapes me. in proximity to sewing it makes me think of a sliver of tailor's chalk.

Singer machines used to be really good but like everything else something happened.
I just wanted to mention to you what my friend Andrea http://thoughtsbyandrea.blogspot.com/ told me. She said she had to quit going to your blog because she would get stuck and couldn't get out. Said she would even have to shut down her computer at times. Do you know of anyone else having that problem?

My parents still have an old Singer. I do remember using it when i was learning to sew.

At first I thought the green item was holding bees wax for the thread, but it looks pretty flat for something like that. I know they have decorative containers to hold bees wax instead of the normal plastic container, but I have no idea about this!

Great play on words! Here I was expecting Billie Holiday and what you have a photo of an old Singer sewing machine - how cool is that!
Happy weekend
L

Cute title and concept! The SOund of Music has a very special place in my heart!

Are you sure it isn't a piece of some sort of wax, which they stick their needles into to help them go through fabric easier. I know I have already stuck needles that were rather dull into a bar of soap and that seems to help. If they are rusty you can stuck them into a piece of sandpaper several times to get the rust off. I doubt needles get rusty in this day and age, since they are probably made from a different tpye metal.

From what I could find on my research junket, that green thing looks like some sort of thread cutter. There were yarn cutter pendants online that looked a whole lot like it. I just couldn't find one identical. So no guarantee on my identification but that is what I think it might be.

I have inherited my grandmother's old singer machine. It's been in the basement at mom and dad's since she passed away year's ago because my own mom used all the great drawers for storage. Now that my own mom is gone, it will soon be transferred to my house. It's a beautiful piece to treasure for sure. Thanks for sharing.

No idea what the green thing is - but my guesses would be along the lines of: spare needle holder, thread cutter, or needle threader.

I can remember, as a kid, playing with the peddle of my (and Annie's) grandmother's old singer sewing machine.

I have an old Singer that I found at an estate sale many, many years ago. It's fantastic...the thing is so sturdy, it never breaks down. I've been through 3 other 'modern' machines, but this old Singer just keeps on going. I don't use it often but I do periodically pull it out for just general sewing needs. They just don't make them like they used to...:)

The green looks like jade, but I think it is probably marble or glass. I lived in Taiwan and Beijing for a couple of years, but I can't imagine what it would be used for except for decoration. It looks like a necklace.

Okay, I took another look, and could see that this green figure is that of a bat. The bat is a symbol of good luck in Chinese culture. Was the man chinese?

I've lost the thread of this blog

My mom peddled an old Singer sewing machine all during the war years. We were so poor, after the Depression, that Gold Medal flour came in decorated cotton sacks. The ladies saved the sacks and used them to make bonnets, aprons and even dresses. Mom was a good seamstress and make lots of clothes for people who were too poor to buy new clothes.

Just the image of a sewing machine reminds me of other people's grandmothers.
I always wanted one who smiled, and sewed and had a sun-filled room with an old sewing machine.

intricate and sparkling and lovely

Great post David, no idea for the green thing - maybe a lucky charm so he doesnt get the needle in his finger:).

We have a Singer up in our attic too.

We're all singers in our family except the sewing machine and that's a Jones! :)

My mom still has her Singer sowing machine, and still uses it from time to time ... I wonder if it's worth anything?

Actually... the note that follows Fa is "sol" not "sew"...LOL... but who's counting. Julie Andrews just has a horrible pronounciation in the movie.

I'd go with thread cutter or beeswax holder if there was anything inside.
I had an 1893 Singer in a polished case until a few years ago - the sheer weight of lifting it made me decide to part with it - plus the fact that its market value was only around £15.00 in the UK.

i have one of those green things...it's jade. different shape though and if i find it i'll know what shape it is lol my mom was never much for sewing outside of mending, hemming, etc...all done by hand. but i love the photographs :)

I think someone else already said "needle-threader" for the "green-thingy", but that's my guess, too!

I used to supply the "horse-power" for an old Singer tredle-powered machine, when I was a little fart! I'd sit between her feet, and together, we'd really "rock-n-sew"!

Sorry!!! I should mention that it was my AUNT'S feet I sat between! And, yes, it's spelled TREADLE, instead of my version!

But at least YOU seem to be back to at least 85% normal---whatever that is!

That machin is art. We used to have a Singer, sold it now we have another singer with a motor.

Did he do that piece by machine?

Come check out my pieces at www.creativeexplosions.blogspot.com

Anonymous said...
This comment has been removed by a blog administrator.
8:37 PM