Owls Of Protest? Not 'Ere, Guv

G Is For Gerald Durrell 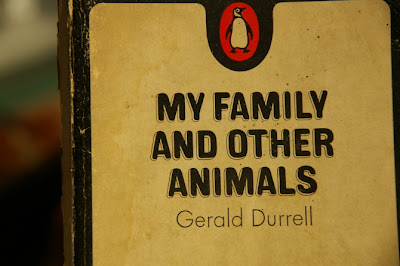 There’s an owl in our house. That’s right – IN our house. He’s a bit squat. He’s a bit nondescript. He’s almost thirty years old. He doesn’t belong to any recognized breed. And he lives on one of the shelves in my study, with hundreds of books. Dunno what breed he is. Barn owl? Nope. Screech owl? Naaaaah. Despite all that, he has impeccable genes.

You see, the unique owl was created by the late naturalist and bestselling author, Gerald Durrell. The British conservationist, a man ahead of his time, was born in Jamshedpur, India, in 1925 and died in 1995. When he was three, the Durrell family returned to England and between 1933 and 1939, they lived on the Greek island of Corfu.

As someone who spent part of my own Indian childhood chuckling over his books `My Family and Other Animals’, `A Zoo in my Luggage’ and `The Overloaded Ark’ among others, I could scarcely believe my luck when I first joined the workforce. As a cadet journalist in Calcutta in early 1978, I was told that Durrell was to be the subject of my first published interview. It was the only time in my life I did not have to do any research on a subject. Having read his books so keenly, I already felt as though I were a part of the extended Durrell family. There was also an interesting coincidence or two, as it turned out.

The first coincidence is that Durrell’s older brother, Lawrence (1912-1990) was born in Darjeeling, the stunning Himalayan town where I was educated. The elder Durrell even spent his early school years at St Joseph’s College in the Darjeeling outpost of North Point, where I was also educated – albeit many decades later. A novelist and playwright, Lawrence Durrell’s most famous work was (and still is) `The Alexandria Quartet (1957-60) which was considered his best shot at a Nobel Prize for literature.

The second coincidence is that I would not have dared to dream that one day I would also be a bestselling novelist. Nor could I have imagined that Penguin - publishers of `My Family And Other Animals' - would publish my own work one day.

During Gerald Durrell’s 1978 India trip, the naturalist had attracted some negative publicity as a politician churlishly questioned his motive for a planned expedition into the country’s interior. It was either a very bad time or a very good time to be seeking him out for an interview. My childhood friend Nirmal Ghosh probably doesn’t even remember this, but his father, on the board of what was then the World Wildlife Fund, rubber-stamped my request for an interview. After a high-profile press conference, a car whisked Durrell and me back to his rambling guest house in Alipore.

He was a pleasure to talk to. Modestly, he played down any hint of a comparison between him and his brother. ``Larry writes for posterity,’’ he told me, without a trace of irony, ``while I write to fund my expeditions and projects.’’ He was completely at ease, happy to talk about character portrayal in `My Family and Other Animals’ and quick to point out that the multi-skilled family retainer, Spiro, was still alive.

At the end of the interview, Durrell complimented me on the fact that I had done my homework before speaking to him. When I pointed out that I had read most of his books as a child, he clapped his hands in glee. This was a good time, I thought, to ask him if he would mind autographing my copy of his most famous book.

No problem at all, he said. He signed the book with a flourish. Then, just before he handed it back to me, he swiftly sketched the owl.

I still have the book. And the unique owl. You know, the one with the shelf esteem. 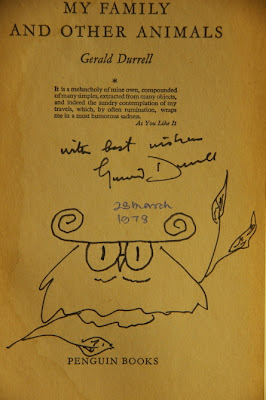 Posted by david mcmahon at 2:15 PM

Hi David,Gerald Durrell has always been one of my favourite authors. I have read and enjoyed all his books. That book must be really special for you.
By the way walksfarwoman asked me to join the Wednesday ABC so she can see more of Afria. So I will see what I can add

I agree with WalksFarWoman. I think you have a great viewpoint to bring to the ABC posts.

The book is indeed one of my all-time favourites, as you'll see with the interview I gave the website of the Oxford Bookstore.

And seven years ago, when our eldest daughter made one of her many trips to India, she brought me a new copy of the book. I treasure that too.

It must be wonderful being able to meet one of your idols, I would really of like to meet Spike Milligan but unfortunatley thats not going to happen. Wonderful story.

It was great. But someone of your powers (and your high-up connections) would be able to arrange an earthly meeting with Mister Milligan, surely!

PS - he was born in India too!

I too remember his books with fond memories. I've never managed to catch any of the TV adaptations that have been done of his work/life but do vaguely remember him being one of the victims? on This Is Your Life.
Whenever I see a hand drawn owl like this I think of a pen and ink picture that used to be on my grandmother's wall with the text:
“A wise old owl sat on an oak; The more he saw the less he spoke; The less he spoke the more he heard; Why aren't we like that wise old bird?”
Rx

Have a good day!

I've never read any of his books but I might just do so now.

I'm sure he would have been a very polished performer on This Is Your Life.

And what a wonderful quote. I vaguely remember a variation of that from my own early years. It has so much relevance ...

So glad you liked the story. I had it up my sleeve for G, so I actually shot the pictures a fortnight ago.

You can see how yellowed the pages have become ...

Great quote from Ruth. Very relevant to us all.

He had a very easy, conversational style.

I reckon `My Family' was his best because it was so carefree, reflecting a wonderful childhood and adolescence.

Ah, Tarka the Otter..The Talking Parcel...thanks for reminding me. Did you catch the television series David?

You do realise that I have just remembered I have a copy of 'My Family and Other Animals' somewhere and I'll now have to go and find it!

No never seen the TV series - maybe they'll crop up on pay-TV one day.

You've got the book? That's wonderful. I'd love to know how old it is. Family heirloom? Old personal favourite?

David, what a fantastic entry for this weeks ABC. Gerald Durrell was one of my favourite authors as a child, I read his books over and over.

How fantastic that you got to meet him!

Like the shot of the book, I have never read it, I suppose I should as it is no doubt a classic. I too have joined ABC Wednesday.

Forgot to add that I did manage to get a glimpse of his home in Kalami, Corfu

Nice tribute. I have to admit I hadn't heard of him before but you have piqued my interest.

I've never heard of him either but I love the way he autographed your book.

That's yet another thing we have in common.

I was extremely privileged to interview him.

Welcome to my blog and welcome to ABC Wednesday. Will check out your site as soon as I can.

The book is a great read for any age. Just a charming narrative.

Do keep in touch

Wow - that was lucky. Maybe you can post a follow-up on your blog ...

I'm sure you'd find a copy of the book on the internet. It's a wonderful read.

He was a very charming man. I was very lucky that he autographed the book and left a sketch as well.

i hv not read this...or any of his books. i will keep an eye out for it next time.

Very interesting story about life's chance encounters. It must be such a joy for you, knowing that this special owl is residing on your book shelf. ;-)

In my experience, people of substance, no matter how famous they may be, are generally easy to be with, don't you agree?

I had the wonderful luck of sitting next to Arthur Miller's table at a dinner and got a chance to talk with him.

He had just given a speech about "Politics and Acting" and I had (put there by intuition? *g*) a Vintage special edition of his "Homely Girl" in my evening handbag. He signed it for me, smiling (shooing his "handler" away, who was trying to interfere, "Mr. Miller is not signing any books!" ).

A 30-year-old owl? That might be some kind of world record!

oooh, how cool is that? I ADORE GD and grew up on his books. As a family we used to do book readings on holiday, and I still remember mom, dad, my sister and I taking turns to read chapters of My Family and Other Animals aloud, and howling with laughter on the beach in Beira (Mozambique)!

What a great G - thanks for enlightening some of us to his work - sounds like a great read!


I will be adding your link to my ABC Wed blogroll.

I loved all of his books which I read as a youngster. I seem to remember reading Lawrence Durrell's too.
Best wishes

Oh, my dear friend. What a wonderful story you have! I was intrigued in the first part of your blog about the owl. Your story has lifted up my spirit better than the creamy coffee that I just had to fight fatigue and headache. I had a hectic day and it was so very pleasant to read your blog. I don't read a lot of books, almost none to be shamefully honest, and I need to revisit your blogs to learn from your readings and writings. And I do love your writings. Thank you so much for your blog.

If you're going to read just one of his books, this is the one to read ...

You;re so right. The greater the person (generally) the more humble they are.

Fantastic that you;re a fan as well. I have great memories of reading the book over and over again as a kid....

How kind of you. Glad you enjoyed the post. Do keep in touch ....

Have never read any of Lawrence Durrell's writing. Must make amends.

Do keep in touch

Thank you for those very kind words. I'm glad you enjoyed the post and that it worked better than coffee!

Do keep in touch. Loved the pics you posted today. My favourite was the third one.

Anonymous said...
This comment has been removed by a blog administrator.
9:15 PM

Anonymous said...
This comment has been removed by a blog administrator.
9:16 PM