Passing Sentence - The Story Is Complete

Sir Grabalot And His Maiden Venture 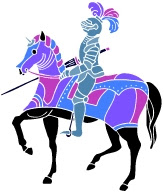 The challenge was intriguing - could a cohesive (or semi-cohesive!) story be written, one sentence at a time, by bloggers in different countries? I posted the first sentence on Thursday morning (Australian time) and it took just over two days, with contributions from the United Kingdom, Canada, the United States, Portugal, India and Serbia. Thank you, everyone, for sharing your wit and for taking part in a fascinating experiment. McGlinch has kindly offered to provide an exclusive GlinchDoodle to illustrate the unusual story. And I can now reveal that the story of Sir Grabalot is to be critiqued by well-known book critic, Toronto-based Lotus Reads.

It was a dark and stormy knight. Sir Grabalot had lost his bride.

Curiously, young Stuhd Hawt, Sir Grabalot's trusted knave, was also missing. And with the loss of his bride, away also went his pride. He that is robb’d, not wanting what is stolen, let him not know’t, and he’s not robb’d at all. He was quiet and sad.

Sir Grabalot's soul groaned in despair as he anguished over what his fellow knights would think about the misplaced beautiful bride and absent strapping knave. His thoughts were drawn to his nemesis, the evil Sir Needitall, who had long lusted after the fair 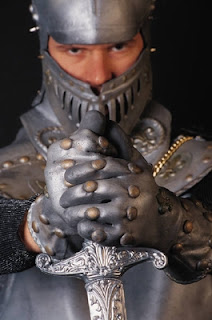 maiden Gunsinrosis, and had often brawled with the loyal knave Stuhd Hawt at the Rolling Stone pub. Had it all been just a ruse - the fighting and the brawling - and the squire's allegiance now abided the evil Sir Needitall's cause?

While he was lost in his thoughts, one of his knights came rushing in, out of breath, in his hands a torn piece from his fair wife's cloak. Then he thought: `Darkness was always my ally so I’ll sneak in their dream and if I see that this torn cloak is just to fool me I’ll put reverse clock and the slow mirror in their bedroom, whose reflection will not show their lust but betray them and the clock will turn the time so there’ll be no future and the present for them’!

But then Sir Grabalot's dark doubts faded like a flash of intelligence on GWB's face, when Stuhd Hawt staggered in, gasping that Needitall had indeed carried off the bride Gunsinrosis, after knocking her senseless with his atrocious music.

"M'lord," said Stuhd Hawt, "I have a cunning plan." "I seem to have heard that somewhere before." muttered Sir Grabalot. "You aren't related to that knave Ladbrick, the servant of Lord Back Ladder, by any chance?" "Nay, m'lord," squirmed Ladbrick, "I am the original sayer of sayings. Do you wish to hear my cunning plan?"

"OK. But first, tell me, have you seen this great invention? They're called pants."

``Pants?'' roared the director Flinton Sparrantino, bringing all action on the movie set to a shuddering halt, ``PANTS - we're shooting an Arthurian epic movie here and you can't remember your lines; we're supposed to do a long shot of Sir Needitall returning on his white steed, bringing the fair maiden Gunsinrosis back to the lovelorn Sir Grabalot because the Rolling Stone pub has run out of her favourite ale; and all you can think of is PANTS; this is the scene where Ladbrick's mistress, Sherry Blare, is supposed to appear with her husband, the beleaguered Stoney Blare, who in turn is supposed to deliver the final line: `On 27 June, as the sun sets in the west, I shall reveal that I am in truth Lord Darth Fader and I AM your father.''
Posted by david mcmahon at 2:09 AM

Oh, that's pure magic, that is!!! Made me laugh out loud.

(I still can't escape the laptop, despite my vow..)

It's well past the beauty sleep hour (2am here) but I just thought I'd answer a few comments, quick-like!

I'm glad you liked it.

But who said anything about pants? You missed out that line!!! (the best one, in my umbol opinion)

Thanks for pointing out the error.

It was an amazing idea in the first place, but the fact that each new sentence that came followed the story so nicely makes it even more interesting! And yes, I laughed a lot, too! That is good thing, to laugh..
cheers,
Cecilia

Whew - thanks for pointing it out!

I'm really glad the idea worked for you. It was a fun project to start - and to watch.

And if it made you (and other readers) laugh, then it's probably the best proof that it was a good idea.

Many thanks for you support. I hope you have a Mother's Day that is filled with joy and appreciation. I know the girls will acknowledge you and everything you have done, in a very special and memorable way.

I must admit it was a challenge wraping it up with the fifteenth sentence and bringing all the wonderful threads to a tied-in conclusion.

Thanks for your feedback.

it all came together so well! congratulations to all of you.

Who would ahve thought you could wrap up that story with one more sentence. You've done the nearly impossible! Still laughing about the pants. BT Bear is funny.

They really put the pressure on me - and it was always going to be a huge stretch to pull it all together with a cohesive ending, as well as some humour and a present-day relevance.

Guess I enjoyed it, though!

Thanks for visiting again.

Have a great weekend

Yes, BTBear is very funny - and the pants diversion really put the pressure on me!

Read the story and loved it, David! I also have a small critique written up, where would you like me to send it? Was looking for an e-mail addy for you, but came up empty-handed.

Thank you very much. Really appreciate it.

I hope you have a terrific, memorable Mother's Day.

Once again, my heartfelt thanks.

McM- doodle up. went with the imagery that stuck in my mind the most.
-McG

Really enjoyed the artwork. Have replied on your site.

Just going to catch up on some sleep. Will post the doodle and the critique from Lotus Reads at daybreak.

My thanks - as always.

Ha Ha Ha... I had a good laugh. And the story has made an interesting read. Shaped up quite well.

Glad you enjoyed the story. The ``pants'' reference took a bit of navigating to complete the story!

It was like facing a leg-spinner in the middle of a pace attack on a bouncy wicket!

I guess you could say I had to ``skirt'' around the pants sub-plot!

Hilarious. No more skirting around the subject, please, David.

Receiving you loud and clear! No more pantaloony quips.

Anonymous said...
This comment has been removed by a blog administrator.
9:06 PM