Here's A Visual Mystery For You! 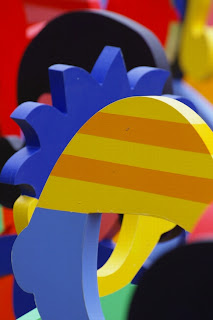 Time to put your thinking caps on. Can you work out what on earth I've shot here? Are they Lego-like building blocks? Are they extras on the set of a Toy Story film? Are they colourful cogs in some futuristic mechanism?


No, they're actually a row of little "floral people". Each of them is about a metre high. Each was a different shape and painted in a different colour. They were simply meant for toddlers to put their head and shoulders through, and were in display at the Moomba fairground here in Melbourne.
I shot this in March 2010. Because I had my long lens on, I was able to find an angle lining up each object and shooting them in a tight frame creating a visual puzzle. It's all about angles of perception, really ...
But this is what the brightly painted figures looked like when viewed normally! 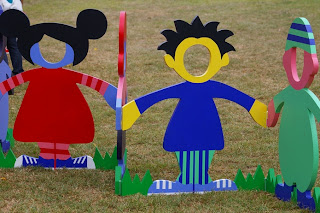 nice...and as well envisioning the little faces poking through...

Thanks, Brian - it was a beautiful autumn evening and I had to wait a while to get a clear shot!

Glad it made you smile, iMac - I knew the visual difference between the two pictures would intrigue everyone!

Was just getting into third gear of lateral thinking when I saw 'the normal' view. Great perspective experiment. Nice to see you back David.

VERY interewsting! I had guessed they were some kind of children's blocks!!

Yes...I'd be honored if you'd use that comment, David!

They are very beautiful little people, aren't they?
I don't think I'd have guessed because I was thinking in terms of clocks and cogs!
Maggie X

Primary colors. People shapes. Don't know, but I like what you did with your long lens!

Loved the bright primary colours and the shot that only you could see would work.

Nice job on the first photo-- I had no idea what it was.