The King And I 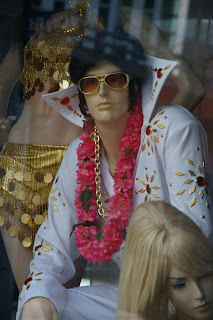 One day Elvis was in the shop window - then he was gone. There's this beautiful white building in South Melbourne that is more than a century old. It has huge old-fashioned windows, a door that opens on the street corner, and a high turret at the apex of the V-shaped building.

It always catches my attention when I drive past this area, because it harks back to a different era and also because it is such a contrast to the other, more modern architecture that has sprung up around it. The building is now home to a place called The Costume Shop and about a week ago I noticed that one of the mannequins in the window was dressed like Elvis Presley.

I was determined to return to the area and take some shots of the figure. A couple of days later I made sure I had a few minutes up my sleeve. I parked down a side street, and walked over to the shop. To my disappointment, it hadn't opened for the day, but I decided to shoot some images from outside. Interestingly, this was not as easy as it might sound, because of the reflections in the window.

Eventually I managed to find an angle where I wasn't getting too many reflections- and trudged slowly back to my car, disappointed that I hadn't been able to get into the shop. But the next time I was in the area, a day or two later, Elvis was gone.

As a good friend of mine quipped, Elvis had well and truly left the building.

There were no clues as to his whereabouts. Not even a pair of scuffed blue suede shoes.
Posted by david mcmahon at 12:21 AM

Elvis had left the building. Hehehe. That was in my mind and then I read it at the bottom. Perfect!
Glad you got his pic before he left! :)

The trouble with Elvis is that he never seems to stay long in the same place! He has been seen all over the World.
The only thing I can say is.... that he keeps a very youthful appearance!
Maggie X

Actually it is a great shot. Elvis has left a lot of buildings!

Sounds like Mr Benn's Costume Shop to me...but you may not know who Mr Benn is - he's definitely English! lol

Sounds to me like Elvis didn't want anyone to know he is alive and well, and hiding out in Melbourne, Australia. You blew his cover.

Have you checked in Vegas?

Guess he might at last have come to England LOL
Elvis was my wife's fav singer and I remember being awakened at 6am once by a weeping spouse saying, "Elvis is dead!" She did the same thing with two popes before John Paul 2nd. again at 6am. LOL

Great to see you back David.

You're too quick for him!
Or maybe, after being photographed, he decided his cover had been blown, and it was time to move on?
great shot, and I know what you mean about reflections, they can be vey hard to deal with!

First of all I found it hard to believe that you didn't jump out of leap off of or swing thru what ever obstacle held you in place and unable to get the shot the first day...I know darned well your camera was with you (isn't it surgically implanted?). Considering all the problems, it is a very good shot after all and quite a remarkable likeness to the King! He was one of my favorites...still is!
hugs to you and the Mrs Authorblog and the Bloglets on this July 4th 2011!
Sandi and Mac

Another Elvis sighting, never fail, Altho the King is looking a bit pale, This here dude is nearly an identical twin, All womanquins fall for this mannequin.

Great to see you here, Kat

Glad we thought along the same lines for the closing sentence!

You're so right, Maggie - and yes, he never looks a day older, does he?

He must have found the elixir of life ....

Does that match the stats you have?

Hi there, Jinksy - I think he is a distant cousin of Mr Benn.

The fact that he wasn't making any attempt to disguide himself suggests that he actually wanted us to find him there!

Hi there, Eddie - great to see your smiling face here.

So Mrs Bluelights has killed off a King and two Popes ....

I would treat her very well, if I were you!

My architect friend tells me that one of the women mannequins has also disappeared.

Could be the start of some kind of rumour .... perhaps.

That boy does get around, doesn't he?