From First Light To Last Light, On The Same Day 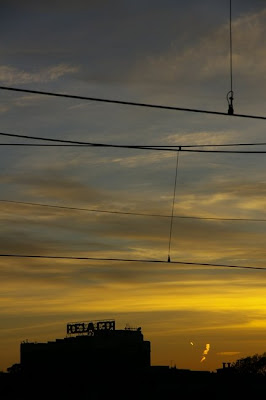 Even in winter, with the late sunrise and early sunset, the Australian skies are still a stunning pallete for artists and photographers alike. At the height of summer, there is enough light in the sky at 5.30 in the morning to take a landscape photograph and the sun only sets around 9pm. Things are a bit different now, in our first week of winter. The sun rises at 7.30and sets just after 5pm.

The first photograph in this post was shot while I stood on a platform at Richmond station. Let me put things in perspective here - I don't have to change trains at Richmond, but if there's a great sky, I get off one train, take some quick shots and then get another train.
And here's a confession. About a week ago, I sat in a train, gritting my teeth while the sky produced a wonderful mix of pastels and bright hues. I seriously considered getting off the train at the next station, sprinting down to the end of the platform, taking some quick shots and then getting back into another carriage. I didn't do it, mainly because the train was fairly crowded, but there is a distinct possibility that this could happen in the very near future. 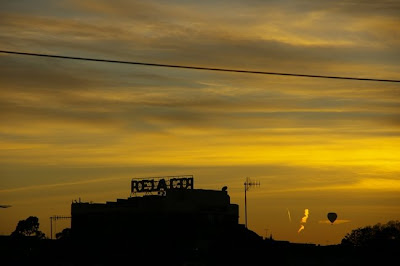 On the day that I took the shots published with this post, I was captivated by the wisps of gold in the clear sky while I waited at Richmond. In case you're wondering, the prominent advertising billboard just left-of-centre is for Pelaco, a clothing business established in 1906. If you look really carefully, you'll even see the small but distinctive silhouette of a hot-air balloon in the bottom right-hand corner.
These early-morning frames were shot in a five-minute span, and you can see the perceptible changes in the light. Later that evening, I had just got off my train when I noticed a sudden burst of colour in the sky. 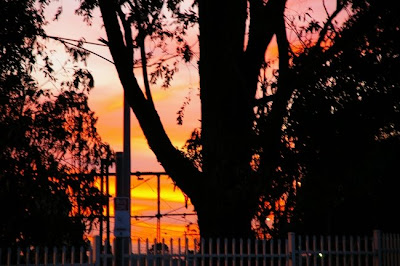 There was heavy cloud around, but that in itself is often a great boon because the cloud reflects a wide range of colours in the moments immediately after the sun has set.
So there you have it - a wide range of colours and a perfect encapsulation of an Australian winter day - gold and yellow at the start of the morning and azure, pink and purple at the end of it. 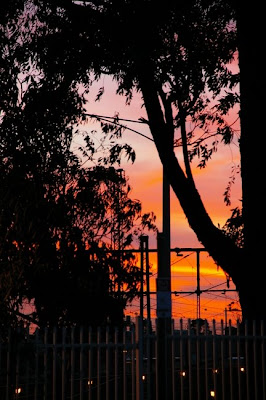 For other participants in Dot’s concept, go to Sky Watch Friday.
Posted by david mcmahon at 5:30 AM

breathtaking pictures...lends a tranquil atmosphere to the mind...and you didn't have to miss a train!...thanks for sharing!

i love the isplay of colour in the sky... however, we've been getting nothing but soggy greys lately...

Oh my goodness David, those last two shots are gorgeous. Just love them. They would look so nice framed and side by side. Thanks for sharing them.

Those last two are spectacular! But that seems to be normal for you.

At one i saw the first picture I heard the old lady Tina Turner in my head... "You are simpy the best"!! and It says all...

You didn't disappoint me today.
Great shots and the colors are fantastic.

Jump off the train?
Anything for the shot.

Gorgeous hues... but I must say the first two photos I really love so much! They are fantastic.
Rocky Mountain Retreat

Gorgeous - I love love love Melbourne and your photos remind me of how much I miss it - I had my first child there and lived near South Yarra for 3 years. Fab

These are such gorgeous photos. The colors are so intense! The gold color is breathtaking in those first two shots! As always, your work is exceptional.

What beautiful pictures! You got some outstanding colors that day!

What a beautiful day from start to end.

Excellent series of photos with beautiful landscapes and colors, congratulations.

Nearly a rainbow of colours David... another excellent post from an excellent guy..

Those colors are amazing! I love checking out your daily photos!

Great shots! The sky always cooperates with you! LOL

It's a pretty good thing that you can't hear my "oooh, oooh, OOOOH!" when I look at your photos. The morning shots are beautiful, beautiful, and the evening shots are just magnificent! Well done!


My lady and her lamp - are now up and running.

Yellow and orange sky... so great!

My SWF photo is now posted, too:

Please drop by if you have the time. Thanks!

I'm a sucker for sky photographs. These are fabulous. I haven't seen a gold sky many times in my life.

I can see you jumping off the train in order to get the perfect shot...surprised only that you didn't actually do it. The photos are both breathtaking (I can see that you're really into colors)and thought provoking. I wonder what causes the colors...not what causes their differences, just what causes them...Sky Watch was successful, train or no train!

Breathtaking photos, David! Last week I mentioned "National Geographic"; this week I will suggest you publish a book of your photography!

Let's see if you can make a "one-stop-train-hop" for more fabulous sky photos like these!

Love the dark and yellow painting that sky, David! And it just gets better the further down I scroll. Thanks for posting these.

i love the winter sunsets. so delicate.

You be careful, leaping on and off your train! Loved those shots, David - and the last one particularly.

I can look at photographs like these all day long and never tire of them...

Those skies are gorgeous, David. Winter loves your camera.

Beautiful colors (and I'm guessing no filter was used)!

Great shots DAvid. I was wondering about the hot air ballon until I read your comment. Those guys must have had a spectacular view.

the photos are lovely as always.

I ride a commuter train about four times a month....I get on at the very begininng...and have taken to cleaning the outside of my window just...in...case....there is something I want to take a picture of.

people think I am bizarre

Those are just gorgeous! I love the hot air balloon in the second shot. A special little treat.
The colors are amazing! Quite a range for the same day.

Nice set of SWF photos. Yes, I saw the hot air balloon. I like that photo, it is lovely.

I too spotted the hot air ballon :)

Wonderful colours in your skies, David. Always enjoyable. I am a bit duller this week - - -

Those last two pics are amazing. It almost makes me miss winter.. kinda.. sorta.. ish. Nah, not really but I'm just glad you're there to photograph yours.

yes it is truly golden skies. But in the last picture, is it a parachute I see, or perhaps a weather balloon?

More awesome photos from you!
Gorgeous!

Wow those are incredible!! What beautiful sunsets you have over there.

The skies are a stunning palette -just like you wrote! :)
Your photos are really stunners!
Beautiful compositions.
It is fun to read about your trip with the train. Wanting to get off... To capture the moment!
All those moments. Every day is filled with them.

To fog or not to fog: that is the question.

Amazing colours. Looked like you'd used filters, but I know you didn't.

excellent post. what a wonderful colors. very atmospheric. you are very lucky to capture also the ballon

David, these are superb. I particularly love the last two, with the trees like dark lace.
Many thanks for the kind mention on "Post of the Day" yesterday.

I wish we had your kind of winter :-) - but I agree: The colours are often much better; somehow different.

Beautiful Australian sky David da(if I may call you so :))

I liked the pinkish purple sky shots very much.

You really do have the most amazing skies, and you capture them so well. I especially love the one with the hot air balloon in it, it must have been an amazing ride for them, would love to do that!

Beautiful colors in all of your pictures. I am never disappointed when I visit your site :)

David, your winter skies are quite beautiful! And of course expertly photographed! :D

Very lovely! I really liked the balloon & the sunset.