It Ain't Over Till It's Rover 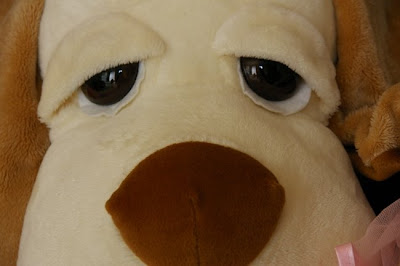 I reckon animals with droopy eyelids are irresistible. So when I saw this one, I had to get out my camera and shoot a close-up immediately.

No, he's not a real dog, but he still looks like he has personality. And yes, he has a woof over his head.

David: I'm afraid it looks like it is over for Rover. He is really stoic.

You just make me giggle.

He's got that Eeyore look to his face!

You are too funny! I think I'm in love with him!

LOL ... adorable find for sure!
Hugs and blessings,

i like how u can find something interesting in almost everything... :)

Oh, you do have a way with words as well as with the camera! Clever Critter shot! But it does look over for Rover!

Such sad eyes; who could resist!

Cuddly dog! I love plush toys - they're so 'comforting'.

well done. . . you find inspiration in everything! Love Rover with a woof over his head!

Oh no! Groan and double groan! Great shot though. I love the close up. I don´t always think of doing that and it is very effective.
Love cuddly stuff. Just popping by whilst officially awol.... :}

He looks real sleepy. I think he might just drop off any minute now!

Takes a big softie to recognize another!

Hey David! My two year old son has a huge one of those dogs, called 'Puppy', no less, and we have to take it EVERYWHERE. Gotta admit I have a soft spot for 'Puppy' myself. Shhh....

And you are very punny.

He looks like the take-to-bed type; lots of sympathy in those eyes!

awwww....just makes me want to squeeze him.

checked out Red Bubble. are you there?

lol... woof over his head! hahahha
My dad won a teddy bear that was as large as me when I was in 7th grade... for me. I slept with that bear for years! We used to practice kissing... just in case. ha. Funny how much stuffed animals give to us. (wink) Humor being only one of many things.

I seriously needed a giggle today and this was the one, so very cute!