The Magic Of Spangles

Yes, You Can Shoot The Shimmering Water I’ve never been a tripod sort of guy. Yes, there are many good reasons for using one, especially in low light, in darkness and when using long exposure times. But I have to admit, for a bloke who does a fair amount of low-light shooting, I haven’t felt a pressing need for one.

The only time I’ve come close to acknowledging it would be handy to have a tripod was on New Year’s Eve a few months ago. There were thousands of families (some official estimates put the figure at more than 100,000 people) on both banks of the Yarra to watch the fireworks, a great Melbourne tradition. 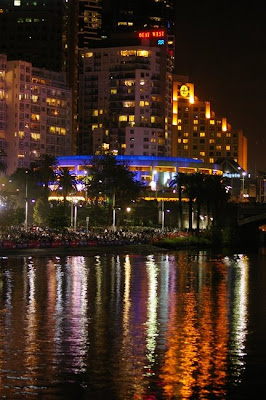 Complete darkness only cloaked the city at about 9.30, because December is a summer month for us topsy-turvy Australians. And shortly after, I walked down past the river bank to see what the crowds were like. That’s when I noticed the lights reflected in the rippling surface of the river. I took a couple of shots, but they weren’t great.

I was about to move on when a boat went slowly up the river towards the city centre. Of course, its wake created more movement across the surface and that started me thinking. Yes, I could find a handy post or railing and steady the camera to get the shot I wanted. Or I could go the other way instead .... 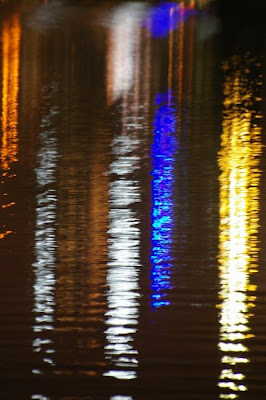 I could embrace the shimmering river and set a slower shutter speed to emphasise the movement and colour across the water. The results are fairly interesting, because the red and gold patterns look like spiral spangles. Just goes to show – never be afraid to experiment or to think outside the square. 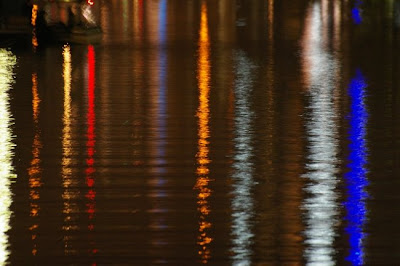 Visit the creative team behind That's My World Tuesday.

I am such a sucker for reflections

Looking at this picture sent a warm calm all over my body. Maybe now I can get some sleep.

wow, great photos. I love the view of the city lights and reflections.

I love these. The color on the water is so striking.

I love reflections, and these are superb! Love the colors! Fabulous as always, David! Thanks for sharing more of your beautiful world!

Looks like you have painted some of the colours on with a Chinese brush! Very effective.
I love reflections.

Great photos, and, as always, fun to follow your logic as you made the shots.

I'm wondering what you think about those articulated tripod things that wrap around any handy post or log or whatever.....

Very cool shots! But then I've always been partial to sparkly reflections in water.

Now this 2nd pic would make a wonderful jigsaw puzzle...say a 1000 piece one...even 500 pieces would be a brain burner! Beautiful!
Sandi

All gorgeous. The second one is my favorite--without explanation it is not obvious what it is

Perfect photos. You have achieved what you want to capture!

I'm a big believer in using a tripod for night shots... some of the time. Actually the only time I worry about it is when it's essential that the edges be sharp and there's no hope of being able to get what I want by shooting multiple stops underexposed. Reflections on water are rarely that sharp to begin with. There are almost always ripples encroaching on the shot. And in the case of a perfectly calm, smooth pond, lake, what have you I would probably reach for the tripod simply because such a scene is so rare. But under most circumstances, there's disturbance of the surface anyway, so why not roll with it?

As you ably demonstrated here, the effects can be spectacular!

I like playing with the camera at night but like you, I tend to forget about the tripod.

You have some excellent shots!

Nice shots David, I like your wobbly bits too.

Love the colour and shimmer in these shots. They draw me in!

These are beautiful shots...love all the shimmery effects..

The efffect of the ripples in the waer is especially pleasing! And the first shot shows that you have a steady hand.

I love the lights on the water!! Great shots. Thanks for sharing them.

Interesting experiment. The type of night shots I like.

David, so lovely to be back on your blog, life took over I'm afraid and I've missed your photos. Just gorgeous as always and hope to be checking in more often. MH

I love those reflections !

I do sometimes use a tripod ...got some interesting shots the other night, of birds flying around the roof of the Casino near me.

It used a long exposure and the photos came out looking like I'd set a kid loose with a white crayon :-)

you make seemingly impossible shots possible. these are wonderful!

Reminds me of squinting my eyes to distort the light; I will have to do that again soon. Thanks for the beautiful liquid gold...and red, blue, green....

fabulous, David. Night photography is certainly something I want to persue more one of these days.

amazing that they are so sharp. Really cool. I like it even when they aren't, but these really are the ultimate.

How gorgeous! I like following along with your though process through the shot.

I have a tripod but only used it for group shots or for shooting my portfolio. It's such a cheap one, I can't put my camera sideways without holding it. One day I'd love to get a better one and wake up early for a sunrise shot.

I love those pictures. Water and colors...and night. So fun.

Mesmerizing, David! I'm having a hard time deciding which I like best. #1 is gorgeous of course but #2 caught my eye with the purple lights in the distance. And I had to enlarge #3 to get a closer look at the light ripples. #4 was nice also but I think this scene looked better in a verticle view.