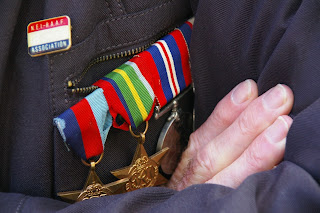 These two images are part of a series I shot while talking to a gentleman who served as a gunner in the RAAF during World War II. We spoke for a few minutes at Southbank, Melbourne, just before the Anzac Day parade on Sunday April 25 this year.

He wore his service medals anchored to the zipper pocket of the dark blue civilian jacket he wore - and he spoke about his time in the Pacific theatre of war. At the time, the telemovie "The Pacific", co-produced by Steven Spielberg and Tom Hanks, had just begun screening on Australian television - and we spoke about the accuracy of its depiction.

His chest proudly bore  the Pacific Star, among other wartime ribbons. It is the second medal from the left, in the first of these images. I thanked him for being so generous with his time - and when we shook hands before he walked on, I thanked him for his service, too. 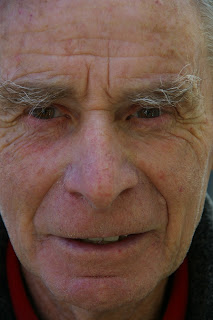 Beautiful tribute. My father in law was a WWII Navy man who served three years in the Pacific on board the USS Tingey.

Always a nice thing to thank those who secured our freedom. Well done, David!

How lovely that the gentleman added his medals to his civilian suit of today's attire. The mixing of then and now is poignantly displayed in your photo.

tight shot david...and a wonderful tribute...eternally grateful for their service....

Both great shots David and thank you for thanking him!

Thanks for this. Sadly, there aren't too many of “the greatest generation” left.

Wonderful honor to a heroic man, thanks for sharing.

What amazes me is as we look as these time weathered faces now, it's hard to imagine that when they did their duty to their countries, they were merely boys, most of them no older than 19, some as young as 14 lying about their ages. They were foot soldiers, gunners, cooks and medics, but no matter what the job they did, they were heroes all. We'll salute all the heroes on November 11th and the salute transcends mountains, oceans valleys and fields. A wonderful salute you've got here David. We thank them all for their service, even now.
Sandi

Lovely post. During Fleet Week here I make sure every service person I pass gets a thank you ...

I don't think we will ever have any idea of how much these people sacrificed for us. We can't and hopefully we won't ever be involved in something as horrific like that again.

One year I put on a Remembrance Day tribute at a local museum. As I tried to read "In Flander's Field" I was suddenly hit by just how many had perished and how horribly they had done so - and broke down in sobs. The crowd waited patiently and soundlessly as I slowly gathered myself and continued. I think we were all standing on Flanders Field that day staring at the row on row of crosses.

Wonderful. There are not many veterans alive to be proudly wearing their medals.

My StepFIL at 92 only recently received his war medals - they thought he was dead! I posted about it here (http://akelamalu.blogspot.com/search?q=war+medals)
if you're interested in the story.

How nice of you David. We don't always stop and think about how much these brave men did to give us what we have today. We don't say thankyou enough.

there are no words that i can type to express my gratitude....

Thanks for this tribute. If only we could end all war forever...

A poignant and timely reminder of tomorrow's special day.

A hero indeed and a wonderful tribute to a brave man. They all need to be thanked for making our world a better place and thank you for thanking him.

I have met a few brave men too.

And a big thank you for sharing this at just the appropriate time.

This post has brought a tear to my eye...brought on by this gentleman's age and pride in his country and his service to it.....just great photo's David.....:-) Hugs

What a wonderful face. And what a great tribute to a man whose service played such a key part in our present day freedom!

Fantastic, David!! I loved the first photo...and then I saw the second...and now I don't know which I like best!!! So wonderful! And what a beautiful post to accompany them! Thanks for the inspiration, David! Warmly, Janine

David,
Both magnificent tributes to this man.
So well done.
V

David,
I'm back. Just covered our Vet Day Parade here. I wish I could have gotten that tight crop but it was a moving parade. I got a few that I'm proud of. One is posted on my blog tomorrow and then some sprinkled around for the next week or so. This one of yours is still just my fav.
V