Please don't shut me out 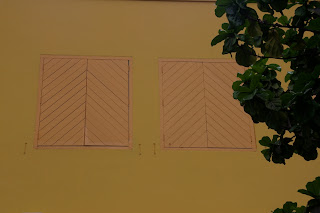 I shot this at Clarke Quay, Singapore, in mid-December 2007, during a brief stopover on my way to India. The quay is a lodestone for photographers, not just because of its range of colours, but also for the way it preserves the city-state's colonial past.

While trying to take in the huge range of colours, I suddenly spotted this muted scene - a simple facade with monochromatic windows closed against the tropical heat and humidity, flanked by the dark foliage of a large tree. The simplicity of it all had to be captured, right?
Posted by david mcmahon at 12:01 AM

He says key. She says quay. They both say. It's a great way. To spend the day. In ocean spray. Your picture reminds me of one I took of two windows with a branch.

I think sometimes the simple pictures make the best ones and of course that tree makes a perfect frame.
Maggie X

actually i like the lines of the window covers...it breaks it up nicely...

For sure.. oftentimes simplicity is the most beautiful of scenes.

Like a childs drawing on ochre coloured paper. Simply lovely.

Only you, David, would have an eye tuned to this.

Aha! Noticing the day and date on your post three things occurred to me at once: "Good lord, where did Saturday go? I could sworn it was still Saturday." "Oh, maybe he's a time traveler, and can see into the future!" "Hey, I wonder if the Singapore tag has anything to...Aha!"

Sifting the clues, I finally got there. I like this picture. I think simple images invite us to imagine more. To wonder what might behind the shutters, and who. They're both a presentation and an invitation to more.

And...fourthly, hopefully finally, "Oh! He's in Australia where it already Sunday. As it is in Singapore. The tag is from '07."

Then I went back to my time-traveling theory and realized that my cold medicine has clearly done terrible things to my brain.

If you need someone to vouch for my not being entirely, raving mad, Hilary actually does know me rather well. Admittedly, she might say, "Oh yes, Alane is completely raving mad...but generally in a nice, non-threatening way."

Really enjoyed your image, Johnny. Thanks for the link.

Thanks, Maggie - you;re not wrong there!

Interesting lines, Brian - like inverted chevrons on a sergeant's badge of rank.

Thanks, Katney - simple is the right word.

So glad you found this refreshing, TechnoBabe.

You're so right, Hilary. And sometimes the simple things are harder to find, as we always seek more complexities!

Thank you, Lakeviewer - that is such a HUGE compliment.

Ah, Land of Shimp, a blog friend of mine, who wrote as Brian In Oxford, used to call me "the boy from the future" as I was always about a day ahead because of where I live!

Thanks, Land Of Shimp, I have great faith in Hilary's judgement.