A Sliver Of Silver

Taking Leaf Of My Senses 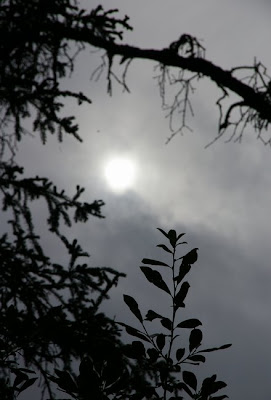 It’s been a fair while since I sketched or painted with any seriousness. Make that ten years, actually. But when I am privileged to see scenes such as this, I wonder to myself if there really is a distinction between a photographer’s instincts and a painter’s instincts.

Do we see things in the same way? If painting occupies one section of my brain and photography occupies another totally distinct section, which one really switches on when I pick up my camera and which one is activated when I have my sketchpad and paintbrush?

I know this is open to debate, but I reckon it’s a bit like having two adjacent townhouses on a single block of land.

Each property has its own entrance, its own mailbox, its own décor and its own personality. Yet both townhouses share the same garden, the swimming pool and the tennis court. Both townhouses are warmed by the same ray of sunlight. Both are chilled by the same layer of glistening winter frost on their separate roofs.

When I was about ten years old, I painted a landscape in varying nuances of one colour. I thought it was pretty special. When I showed it to my mother, who was my Google, my mentor, my guide and my earliest inspiration, she told me it was a monochrome. I’d never heard the word before, but when Mum explained (as she always did) the significance of "mono" and "chrome", it all made perfect sense.

Sometimes monochromes simply dominate everything in view, like the shot I took three years ago in Quebec City. But on the other hand, sometimes monochromes play hide-and-seek with us, presenting themselves coyly behind the veil of "normal", perfectly defined, high-definition, full-palette landscapes.

The shot above was taken during a short breather on a recent hike through Kluane National Park. In reality, it was only a very tiny slice of the stunning scene in front of me. It was early fall and the colours at ground level and downhill were a stunning array of red, burgundy, lime, bronze, orange and some small patches of strong green. Beyond that was a blue and silver lake. Dominating the skyscape was a range of snowy mountains.

High above me, a small wedge of sky caught my attention. The early-afternoon sun was peeping weakly through fast-moving cloud. In a few seconds the cloud would have passed and the sun would no longer be obscured. I guess I "saw" the shot and knew I had to act fast.

Let’s say you viewed the entire scene as a clock face. If you started at the very top, where the clock hands show noon, and worked your way completely around and back to the start, each hour showed a different scene spanning a vast array of colours. The minuscule wedge of sky in these two shots was perhaps a three-degree arc in the 360 degrees available to me - but they were three degrees of validation, not three degrees of separation. 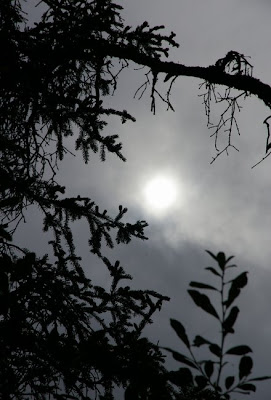 For other participants in Dot’s concept, go to Sky Watch HQ.
Posted by david mcmahon at 2:00 AM

LOL!! fab pic David in fact glorious pics...but you bylines are getting cornier and funnier everyday, I can't stop chuckling!!!

I think a photgrapher and a painter, in most cases, have the same eye. The camera is a different medium, just as oils, water colors, or charcoal, etc. are. The eye sees and composes, and if you have good technique and skill in one or other ot the media you can make a work of art. Not everyone has the skill in every media.

Wow that shot is gorgeous, and I defintiely think a photographer is a kind of painre in some ways. Lovely post.

I had already taken years of art classes by the time I took my first photography class.

The instructor was dumbfounded at how good my photo compositions were. "You don't even need to crop!" he would regularly exclaim.

The same thing happened when I tried my hand at scrapbooking (to sell pages to magazines).

Composition, colors, and design are universal components of art.

And I absolutely LOVE how your mom was your "Google". That made me smile more than anything else in your post!

Black and White and Sepia are among my favorite outdoor photos....good stuff.

Beautiful - monochrome is king. I believe the same creative part of your brain is used, whether capturing something on film or using canvas and paint. You definitely have a creative eye. Thanks for your thoughts on your process - and for sharing your brilliant mom's comments (or your evaluation of them - very touching)

Thank you for the lesson - that was needed.

I think the creative instinct is the same all the way around, David. And this is a beautiful sky shot. Gorgeous.

Since you mention monochrome, have you noticed "Monochrome Mondays?" You can see a few of mine on my Photologue blog.

You certainly can "paint" with your camera, no doubt about it. Your mother must be so proud of you.

Interesting post, great title and wonderful skywatch photo! A+ in all 3 subjects!

Great capture for SWF!!!! I am so happy to be part of this fun. I find myself excited visiting other sky photos all over the world. Happy weekend! Hope you can visit my SWF entry too...

great photo. Loved it as always.

Lovely shots, David. I do love your headings too.

My mom, my Google...love the reference.

I would venture to say that it would be easier to go from painting to photography rather than the other way around. Many of the same elements are there, but I think it would be more difficult to master a brush which is completely free form than a shutter that is more mechanical.

By no means am I trying to say one is more talented than another. Your photography shows just how much skill you posses. Just an observation.

Of course the greatest difference is that the photographer's reward is instant, well almost...and he 'gets' the shot he sees. In painting, the vision is there but the results are never always what was in the painter's eye.

Loved the shot. Almost as good as my jar of mushrooms...he he!

What a wonderful concept David...like hearing music from another room...sometimes the muffled tones are better...
Sandi

These tiny slices of the scene before you are simply magical! All the leaf shapes have a unique silhouette beauty against the sky!

Used to be Kodachrome and there was no way to make it monochrome. Now with digital you can do all with one camera. The difference between the photographer and the painter is the speed with which they work. Pappy

Have a nice weekend:)

I love the moodiness of the shot!

Really nice pics, David! I like the tone on tone of those grays. They make me think of cool damp mornings.

Painting w/ our cameras is much less mess and forgiving

I too find myself thinking my photos look almost like a painting. Now I tend to think I'd like to paint what I have photographed. Today I took some tree shots that were silhoutted sort of similar to these you took only mine are much darker. They may be an Odd Shot due to the shape of the limb of the tree. I posted after my "Highway to Heaven" Sky Watch tonight. When I came up with the caption/title, it reminded me of how you do your titles. I hope you don't mind that I borrowed your sense of humor.

I'm not a painter or artist despite early aspirations and a demand that half my shed be dedicated to a painting nook, but that view of the moon with the clouds around it has an impressionist look about it. Almost identical to a view I have in winter of the moon rising among the gum trees. Alas, my constant battle with night photography has yet to see me produce a decent photo!If persistence pays . . I'm gonna be rich!