Santa Claus? Naaah, This Is The Banter Clause 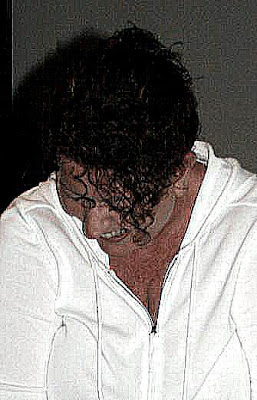 This week's interview is with Baino,
who writes the blog Baino's Banter.

The first of the standard questions. Why do you blog?

A work colleague sent me a link to his podcast, it was hosted naturally on a "blog". Having no idea what a blog was or what it should be, I thought at first it would be a good vehicle for a personal life journal. Something my children could read long after I'm gone and retain a little essence of their rather unconventional mother. Basically I type faster than I write so an electronic journal seemed obvious. I didn't know how to set it up properly and therefore didn't make it private as was my original intention.

Then, ever so slowly, and as I visited others, I began receiving the odd comment, making the odd comment and before I knew it, I had a blogroll and had been "rolled" myself. It's still a journal of sorts but now less personal. Funnily enough, I only have a couple of Aussie commenters, the rest are worldwide. So now I blog for myself and others and thoroughly enjoy the social networking.

Alliteration . . always catchy, yeh? Baino is an abbreviation of my surname of course! The rest is just banal banter so . . . Frankly I didn't really think too hard about it and have often thought of coming up with something a little more clever . . . maybe . . . later . . . procrastinators of the world unite . . . tomorrow!

It allows me to vent, fills in the quiet times (I sleep poorly so early mornings usually) and has provided me with unusual contacts from around the world. I talk with many of my commenters via Skype which is wonderful and enjoy a little slice of life that I would otherwise have never discovered. I've made virtual and real friends (and one or two enemies) but I think I may also have actually saved someone's life by intervening at the right time via their blog . . . we've been friends now for 18 months and he's planning a visit in January, now that's rewarding beyond belief.

Blogging has enabled me to virtually meet people way outside my comfort zone as well as like-minded souls. Where else would I have a conversation with, or an ability to understand a drug addict, gays and lesbians, 17 -year-old students from Finland and Budapest and until recently a 108-year-old woman? The diversity of lifestyles, occupations, philosophies and styles is amazing.
What key advice would you give to a newbie blogger?

I can only really speak for personal/social blogs, since mine is that way inclined. Write for yourself. Try not to be influenced by the number or types of comments you get. It's great when people do comment but it shouldn't colour your subject matter. Be honest but not brutal. (Harder to maintain than you would think!) and respond to your commenters. Also if you're taking a leave of absence let people know.

It's surprising how attached you can become to even anonymous bloggers and it's worrying when they mysteriously disappear. Finally, be mindful of the feelings of others. If you're creating a public blog, it's best not to criticise family members, colleagues or friends who might read it. I know people who have become unstuck by being too critical or hurtful.

There have been many but one that touched me recently was about a young mother who has finally found music as a communication tool for her severely disabled little boy. She's normally very funny, very articulate, very disrespectful but K8 touched a few hearts with this one.

I had to think hard about this one as few would I put in the 'significant' basket. Although I do occasionally ride high on my virtual soapbox it's generally reminiscences, life in Oz, news commentry and a few laughs but I did write Fatherless Day, which is close to my heart and some taken from the eulogy I gave for my father after he passed away in 2002. It seemed to strike a chord and certainly reflects the love and respect I had for him all my life. 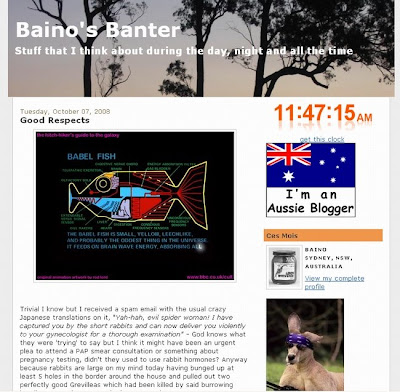 Today's Sunday Roast with Baino is the 38th in a weekly series of interviews with bloggers from around the world.
Posted by david mcmahon at 1:30 AM

Another alliteration lover! Yay! On my way...

Lovely guestpost!!! I may hold on to this for future askers about starting blogs, you explained the different aspects of the whole thing really well :)

Thanks for the link petal... but... very disrespectful?! Screw you!! (hee hee)

Oh what a great interview with the inimitable Baino!

I can't wait to go make her acquaintance...she sounds a winner
Sandi

I enjoyed reading about your blog...now I'll find it and read it.