Maybe This Was Their First Screen Test 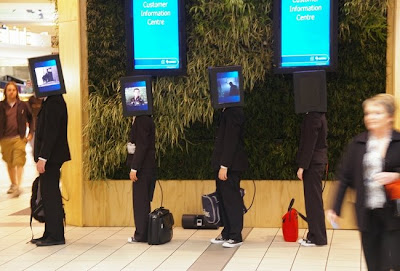 These shots were taken on the concourse at Flinders Street Station here in Melbourne on Wednesday evening. It’s school holidays here, so I met Mrs Authorblog and two of the Authorbloglets after work. We spent some time in the city on a beautiful, balmy spring evening before walking down to Flinders to catch a train home.

I had just walked through the ticket validating machine when my son nudged me and pointed to these four people wired up and wearing monitors on their heads. Naturally, I had to take the shot, so I told the rest of the family to carry on.

Now here was the dilemma. Should I walk up close and try and capture just one or two of them? Or should I try and take the broad view and get all four into one frame? I had to take into account the fact that this was rush hour and I would have commuters hurrying past me as I tried to compose the shot.

There was a train coming in less than two minutes, so I just followed my instincts and took a horizontal frame with all four of them in the shot. But only three of the screens were visible, so of course I had to take another shot - and I was lucky that the two commuters rushing past didn’t actually obscure my view.

Then, as I heard the train approaching, I fired off a couple more shots. Yes, I made the train. No, the rest of the family weren’t concerned. They’re used to me going walkabout with my camera. 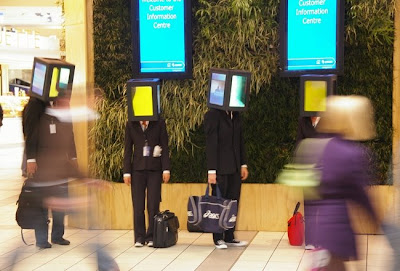 Hi David...
This got my attention... as I'm sure it was meant to.... I hope who ever came up with this got their just rewards..
I would have loved to have been there, camera in hand.

See, one more reason to have your camera with you ALL the time. Couldn't have shot it better if you'd composed it yourself! Although what the box head square eyes were doing there is anybody's guess!

Honest to Betsy, David...you certainly do have your eyes about you. I take my cam. with me now ALL THE TIME and all I get is sea, and grass and the back end of dogs.

Brilliant! That wonderful sidetrack in the haste of life! And who would miss it! When the haste is forgotten, the sidetrack lingers on!

Very strange, and a great reason to take your camera everywhere.

Did you discover what they were advertising? Surely there was advertising going on! And here I thought all the best gag reels were made in England! Great shots...wish I knew more about it,lol! I wanted to nominate a post for Post of the Day...I think you'll find The Pioneer Woman a hoot...go read how she quit smoking lol!!
http://thepioneerwoman.com/
is where you'll find her!
Sandi
ps
she has some of the most amazing recipes in there...Onion Straws...ohhhhhhhh

funny story! The things you notice!!

It has to be pretty hot inside those monitors. How are the other people in the photos NOT looking at them? Too funny. I'd love to know what that was about. Great shots!

Oh the stories your cameras would tell if they could talk!!!

And I'm with Hilary. This must be pretty common if so many were oblivious to the strange monitor headed people.

See? This is exactly why you should NEVER leave home without your camera!! You just NEVER know what you're going to see waiting for a train!

This is very peculiar, to be sure. GREAT shots!!

I guess if you have your head in the computer all the time, you miss out on real life rushing past you. And the opportunity to get shots like this.

That is bizarre. I love the people in the shots too.
Great job!

As obscure as it is having people with monitors on their heads, what really stuck me was that commuters are going that fast on FOOT that they are almost invisible!

Are you sure you didn't dream this?

This is just pure eye candy! It almost looks like it came straight out of a magazine! AWESOMENESS!

Intriguing. Great capture. I'm glad that the commuters didn't get in the way.

OK and so WHAT was this all about? Did you know? Absolutely interesting!

Only YOU would be there at the right moment..with a camera! You've really got me looking at the world with new eyes.