The Light Shines On A Significant Message 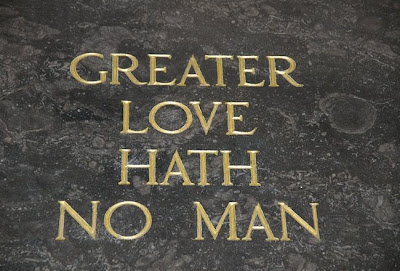 When I was very little, I remember the joy of reading, because it opened up a whole new world for me. I clearly recall being in church each Sunday, at the beautiful Missions To Seamen Church called St Nicholas in Calcutta - and suddenly being able to read the brass plaques on the walls, between the high, narrow, arched windows.

One plaque honoured the memory of a sailor who had sacrificed his own life to save a shipmate who had fallen overboard. The inscription at the bottom of the memorial plaque read: "Great love hath no man than this, than a man lay down his life for a friend."

Those first five words are central to a very solemn part of Melbourne, the city that I have lived in for the past 20 years. In the Shrine of Remembrance on St Kilda Road, there is a special reverence that is hard to describe. This marble inscription is at the heart of the Shrine's interior and it has a very significant meaning.

When the Shrine was built, the architects were helped by calculations relating to astronomy and mathematics. The intricate design means that a ray of sunlight shines through the high atrium on a special commemorative day, to illuminate the word "love". 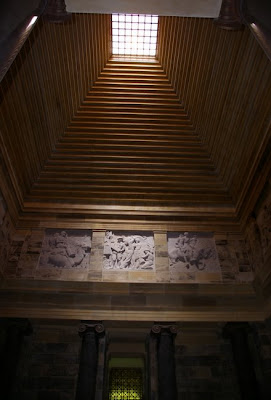 That day is the 11th of November each year. And the ray of light strikes the word "love" at exactly 11am, the eleventh hour of the eleventh day of the eleventh month. The calculations ensured that this accuracy would endure for 5000 years.

But then the state of Victoria introduced daylight saving - which in turn meant that the careful calculations would be thwarted. That's when all sorts of solutions were considered - and the simplest one was put in place.

Now, a simple prism refracts the light ray by exactly one hour. And at the appointed time on Armistice Day, the sunlight still illuminates the word "love". 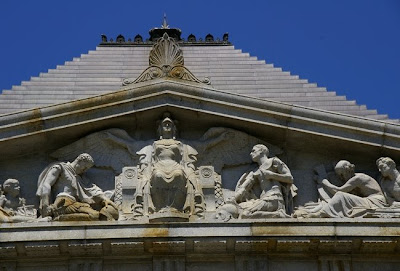 What a beautiful sentiment.

thank you for sharing this. what a profound memorial.

Beautiful, not sad. That inscription makes me feel good not bad ... good thing I didnt play...

Glory to those people who made this happen David. Remembering the soldiers who have given their lives for our freedom is something that should be done every day on every hour. But this is lovely and this will do nicely.

Thank you for allowing me to *see* this shrine. Your words painted a beautiful vision!

~AirmanMom returning to her blog...

Mathematical precision honoring the mystery of light and love. It must indeed be a place in which the reverence is palpable.

And, yes, your photographs capture that a bit. And your words.

I love childhood memories. Thanks for sharing. The photos are beautiful.

wow. That is fantastic-- thank you so much for sharing this. I'm feeling really inadequate trying to come up with the words that I felt while reading this post.
Wonderful post.

Very interesting post, I am glad you recalled this childhood memory and how ingenious of the designers.

love your skywatch photo but this post is just awesome and what a magnificent wonderful monument and the light (even though daylight savings could have messed it up) anyway I love it!

Wow, thanks for sharing.

Such a beautifully written post about important events that tried mens souls until today even...thank you for sharing this with us David
Sandi

Great message. The one who sacrifices may shorten the span of his life, but increases the quality. That's the power of real love. Good stuff, Man!

I am always moved by the strength of faith.
A beautiful post.
Thank you.

Very ingenious and a creative solution.

That's a very beautiful memory and sentiment. Thanks.

What a fantastic monument to those who make the ultimate sacrifice. In recent days here in N.Z. a gentleman leaving work in the early evening went to the aid of a lady being accosted and was stabbed through the heart and killed for his trouble. This post really brought home how brave that sacrifice can be for those who pay the ultimate price to help/assist their fellow humans. God bless them.

11th November is not far away. Please PLEASE get us a photo of that - if it is allowed. It would be such an awesome sight and one many of us are unlikely to see - unless you are allowed to photograph it and publish it here. I'd love to see it.

I love those words. It reminds me of the sacrifices many have made but ultimately, the greatest sacrifice any have made on our behalf, and that is Jesus' sacrifice.

Very beautiful post, moving and enlightening, beside to randomly bump into another north pointers blog is a blessing itself, sir.

will regularly drop in now:)

I would concur with Crazycath's request. That would be a beautiful shot to capture.

A beautiful shrine in a solemn place. Happy hunting!

What a wonderful way to honor the sacrifice of so many young soldiers.

Wonderful memories. Also a great statement of the Christian faith. Thanks for sharing this special place with us. Pappy

That is one of the most moving memorials that I have ever heard of. Thanks for the story.

That is just beautiful.

David...What a great story and one that strikes a cord in my heart as 11-11 is my deceased brother's birthday. Love and memories...that which sustains us. Thanks for sharing.

Well, that is great that they have ben able to solve that problem..and thanks for telling us the story David..

it doesn't surprise me that they have thought to do this, as I did the same thing for my weddng..I chose an hour (11am) that the sun would shine on us both just as we stood there at the front of the (humble) church where we were married...then it rained on us as we walked out!!

That is truly amazing. Thank you for sharing the story and pictures with us. I, too, like crazycath would love to see that photo!

Oh my gosh, David. What an amazing story! And what an even better argument against daylight savings time!!!

It just goes to show that one can never factor in all possible variables, especially considering the minds of men.

Sad memories on the 11th of November but what a wonderful tribute to the fallen. The words you've quoted are from John 15:13.

Stunning - and what an amazing thing to illuminate - not only the word, but the whole idea. Your post reminds me of a place from my childhood in South Africa - the Voortrekker Monument - seems to me there is a similar phenomenon there - with the sun illuminating a specific feature on a specific day at a specific time. Must research it and find out what it was. Thank you for your thoughtful post.

That is a very great memorial.

A wealth of Sadness there.

Fascinating story ~ so glad you shared. It would have been very SAD (tragic), if a solution had not been implemented. Kudos to those who ensure love remains illuminated.

I love the story... it's a sad and happy type of thing. Heroism usually is. Thanks for the story that went along with it, I'd have to go visit next time I find myself there.

I actually went to an ANZAC day service at the Cenotaph in Melbourne as a teenager, (I lived there for four years) it was very moving and I love the place but I'm not sure the timber prism was there at the time. Lovely. And clever. You should have saved this one for Nov 11? And San . .yes. . there are a number of these buildings in Australia and they're very contemplative places. If any of you ever come to Australia, I can't recoment the War Memorial and museum in Canberra highly enough.

Hope your weekend is treating you well.

How beautifully explained and love the pics, a little different from the more traditional images of the Shrine!

Thank you for the lessons learned.

What a wonderful memorial. Great take on this week's theme

very sad, but it's nice that you can share, thanks...
view mine if you wish here thanks...

That is one of the most uplifting things I have read for many a year.

What a wonderful tribute to all the people who lost their lives. Thank you for sharing this David. I would love to see it for myself as I intend to visit Australia again in the future God willing. :)

Wow. That's a great story, David. I assume there are great multitudes present at the appointed hour each year, eh? Wish I could be. Must send a shiver up the spine.