L Is For Lyrics

Sing Along, But Don’t Hurry Krishna 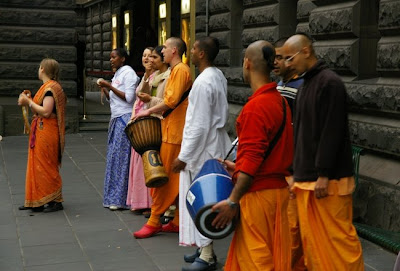 These photographs look as if they could have been taken thirty years ago, back when Krishna consciousness was at its height. But they were taken a week ago, on Swanston Street in central Melbourne.

It was late evening and the light wasn’t great, but I just had to take the shots anyway. I reckon it’s been at least two decades since I’ve heard the ancient Hindu chant that is so rhythmic and so distinctive, even when it is being enunciated quietly, to no other accompaniment than the sound of finger cymbals.

The chant itself is believed to lead to a higher state of consciousness and it suddenly found new relevance in the Western world three decades ago. This was when the Hippie movement spread and when those who embraced flower power began to travel to India.

Back in the 70s and 80s you couldn’t miss them. I still lived in India at the time and it was more common to find shaven-headed Caucasians, rather than Indian devotees, wearing saffron robes and walking the streets while they chanted.

At that time, the ancient Hindu faith also found a sounding board in popular culture. It was the late Maharishi Mahesh Yogi who introduced TM, or transcendental meditation, to an international audience when The Beatles became his most illustrious pupils. 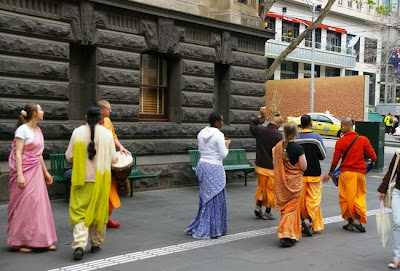 I’ve heard that they spent time with him in Wales, but it’s also well known that The Fab Four also did a well-publicised stint at the Indian town of Rishikesh, studying Hindu meditation methods. Not surprisingly, the chant can also be heard on the late George Harrison’s hit My Sweet Lord, which was from his hit album All Things Must Pass.

One thing to note is that the Hare Krishna chant is a soft chant, full of reverence. The words to the chant are very simple:
Hare Krishna Hare Krishna
Krishna Krishna Hare Hare
Hare Rama Hare Rama
Rama Rama Hare Hare
Last week, when I first heard the chant in the background of the hum of city noise, I thought perhaps someone was playing a CD. But then I looked up ahead and saw this knot of people walking down Swanston Street, towards Flinders Street Station. They were in no hurry, so it was fairly easy to catch up with them as I got my camera ready.

This final shot is fairly interesting, because they had stopped right outside City Hall, with its beautiful bluestone exterior, which is visible only as a deep shadow on the left of the frame. Take a close look at the image and you’ll see that there are few clues in the picture to suggest that it was taken in the 21st century.

And the final word on this photo essay? Give peace a chant. 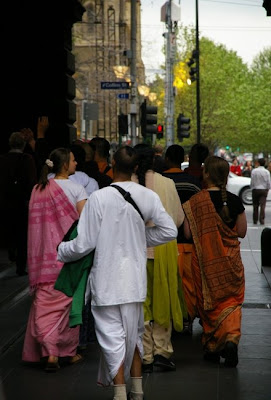 For the home of ABC Wednesday, go to Mrs Nesbitt's Place.
Posted by david mcmahon at 2:00 AM

Living in Oklahoma, you don't get a chance to witness much diversity, however, on a trip through a local McDonald's, there were several large tour buses, and groups of women and men dressed similar to the ones in your photos. I was guessing they could have been Hindu, but I wasn't sure. Now maybe I know!

I think with all the "new age" religions becoming more and more mainstream, that could explain a resurgence of Hare Krishna's.

Great pictures, and love the info!

I'll support that last sentence of yours wholeheartedly.

Interesting stuff. I saw some Hare Krishna stuff even on my recent trip to Peru.

Oh man this is taking me back to the good ole early 70's when the krishna chanters were on my college campus and I'd walk past them everyday. They were at the airport too. And your last line is cracking me up...give peace a chant! All righty then...

The tune to the words formed in my head immediately. It doesn't seem that long ago. How do you come up with the "pun" linea?
Sandi

I love the Hare Krishna chant, it does indeed help in deep meditation, and tends to bring quite interesting visions too!

Besides telling an interesting story, the pictures are very visually interesting with the bright colors. "All we are saying"

Always used to see them in the airpot.Haven't seen them in a long,long time.

It is a long time for me too since I have seen or heard any Hindu mantra. I studied Hinduism when at university - a diverse and colourful religion.
I was looking for the clues to the 21st century in the last shot but my eyes are failing me. I thought I might see a mobile phone or similar - but no. I can't see the clues, but enjoyed the pictures.

Wow... that's interesting. Something you usually see in the larger cities at airports and stuff, isn't it?
Very unique!
~Michele~
Mountain Retreat

Now that is something I haven't seen for many years.

Give peace a chant! I like that. We certainly can use a bit more peace in this world.

Really informative post David! and great photos too!
I am very interested in the Hare Krishna beliefs and also find the chant to be so calming, almost hypnotic!
Time to shave my head and start wearing orange.... :)

At your puntatsic best with the title. To my knowledge I have never seen any Krishna's on the island, yet they were a familiar sight in the UK. Lovely peaceful friendly groups of people. Not sure about the orange or hairrcuts, but if it's good enough for George Harrison , it's fine by me. Inspiring L.

That's a lovely set of photos, David. And my sister took classes in TM when she was young. Of course we both grew up during the 60's and 70's. I haven't seen or heard that chant in years either. Guess I need to go looking for an audio or video of it.

As to giving peace a chant, groan! But they did give it a song. Remember "Let Peace Begin with Me"?

All Things Must Pass was one of the first albums I ever bought.

I didn't realize they were still doing this. I saw them years ago--thought they'd passed into a rarely seen place.

We haven't seen any of the Krishnas around here for many a decade.

I haven't seen them around here anywhere for quite some time. I wonder why. They were on the university campus where I went to school, airports and street corners. Hmmmm. I need to investigate this.

I love the sly puns!

Its not just your fab images, and all the colour, its the
clever subtle one liners...l'll get there l will...
I'ms itting at work, having opened up early and have a migraine coming on, I didnt think I could raise a smile this morning but I have, perhaps I can beat this bugger..or else its home to bed!

I saw a few chanters recently when I was in the hairdressers. Apparently they stil walk through town on a dilay basis. (But there are only about 4 of them!)

What a walk down memory lane and back again! I used to live in Sydney outer southern suburbs, (Camden) and a small group would be in the main street on a Saturday morning!

Enjoyed both pics and commentary!

Thanks for bringing me back to the 60's and 70's with those photos. Very witty and informative post as always.

These are very seldom seen in Rome, which is so full of pilgrims.
It's been years since I last saw such a group of singers.

Those photographs bring back wonderful memories.

I have just read Patti Boyd's autobiography where she writes in detail about the Beatles experiences with the Maharishi.

LOL...Sing Along, But Don’t Hurry Krishna

My daughter has spent a lot of time with a group of Hare Krishna's when she was in University as she helped them feed the poor. She is not signing on the dotted line to join but she thinks they are a very peaceful bunch of people.....

Great photos, David. Sure does bring back memories.