Shall We Sashay To The Sachet? 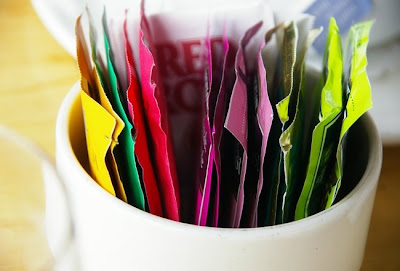 This shot was taken while I was eating lunch at the High Country Inn in Whitehorse, literally a few minutes after I completed a journey of more than 24 hours since I walked out of my own front door in Melbourne.

These sachets in front of me on the table caught my eye because of the range of colours and the strong, easily definable lines and individual angles and kinks of their respective edges.

I had two cameras in my shoulder bag, but I opted for my Pentax K100D because it had my favourite lens, the versatile 18-125mm Sigma lens on it. I only took one shot and later, when I looked at my images on my laptop that night, I was quite gratified with the clarity of the result.

What you're looking at here is simply a scaled-down, low-resolution version of the original, but on the high-res shot you can actually see the little details on the corner of the sachets. I was very pleased with this result, because it looks as though I've used a macro lens instead.

I guess I was lucky because the light was fairly good. But if you're keen on the details, I shot this at F8 and 1/90 of a second.

I guess this is also the best place to answer a question I got asked on Friday - how many shots do I take before I'm satisfied with an image? The answer to that is very simple. I shoot on instinct, just as I write my novels. So if I'm satisfied with the first shot, I don't hit the shutter a second time.

If I'm shooting a landscape and it's a wide vista and the light is changing, I'll shoot between two and four frames or more if the situation demands. I'll shoot half a dozen if I am trying to capture a scene from several angles.

But I am drawn to these unusual shots of everyday objects and maybe - just maybe - it says something about my approach to photography, because they are generally the result of a single frame.

(The Odd Shots concept came from Katney. Say "G'day" to her.)

Posted by david mcmahon at 2:00 AM

Well, that can always be said of your photos and stories--even those that might be black and white.

Amazing colours, so did you pick the sachet for it's contents or just because you liked the colour? Or is that just what us women do when choosing cars? Debs x

Very colourful and I noticed you often do the odd shots on a single frame.

Great shot. Great post. Mustard, mayo and vinegar in there?

And why can we not buy your books over here in the most cultured, I lke to think, country in the world?

Oh, the colour "Wheel-O-Tazo, puts my heart aflutter, so many memories! I remember when I noticed those beautiful tea bags for the first time in the middle of the 1990s, back home in the USA. Some time later Starbucks started to carry Tazo teas, which made even tea lovers like me flock to their coffee bars, to order a Tazo Earl Grey from the barista.

Here's a link to Tazo's beautiful website (notice the "om page" instead of "home page" *smile*).

Thanks for the memories, David! :-)

My shooting habits are very similar to yours. Lately, I find myself in manual mode more often than not, makes me feel more in control of the outcome. Every now and then, when I shoot more than one frame, usually the first one turns out to have been the best anyway.

always colour in yur pics David...l think you must be innately drawn to it. I dont think you have ever posted a dull in colour or indeed in Composition or interest in my time here!

And there is beauty to be found everywhere...

Those look like Canada's version of herbal teas. Oftentimes, restaurants will put out a bowl of a variety so you can help yourself. People here tend to make herbal teas simply by putting a bag in their cup and add hot water. Not "my" cuppa tea, but others like it.

David, your intuitive shots like this, aside from being simply gorgeous, are rather evocative. The ordered nature of the colors in their white containers is most evocative. Classic example of whole being more than sum of parts.

David, I love it! Those bright colors in an almost rainbow array are so cheerful looking. And as San pointed out, the white cup they sit in is a great enhancement to their almost glowing intensity. Yet the belief that these are tea bags and tea being a ritual of calming is also brought forward by the image. Very nice!

I find colour hard to resist. Evidently so do you. Looks great.

Beautiful! I love all the colors...D

Looks like tea bags to me but you were the one who saw the sachet in person so I believe you! Just looks so similar. . . hmmmm now that I read the other comments, maybe I was right and they are tea bags after all. To me, a sachet is a nice smelling herb or dried flower in a little packet, usually cloth.

Come and se my odd shot.

A delightful shot with eXpert elements of color, teXture and style. Enjoyed your narrative. ThanX for taking time to answer queries.

Chuck in Seattle always says he is drawn to strong bold colours. I alwyas say, red yellow and green should always be seen. Proves that he most mundnae of objects can be the most interesting for a photo op. As for the title, you are sashaying to punland and we may never get you back.