A Perfect Case of Cane And Able 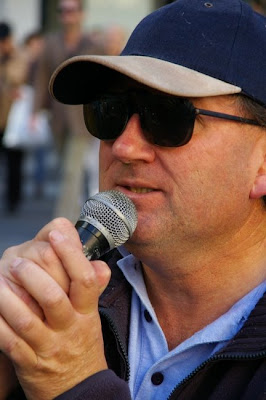 As I walked through the Bourke Street Mall recently, I could hear an Elvis song above all the myriad sounds of the beautiful city I live in. I knew immediately it was a street performer, but I couldn’t actually see the singer.

As I walked up the street, I saw this man on a street corner. At first I could just see his head and shoulders - it helps when you’re well over six feet tall, because you get a clear view most of the time. The closer I got, the more poignant the scene became.

The street performer was seriously vision-impaired, hence the dark glasses, the white cane and the prominent sign. I stood and watched him for a few seconds as people hurried past. So many people, so many things on their minds, and yet this man stood, seemingly oblivious to the pace of the city, delivering the ballads that probably held great significance in his own life. 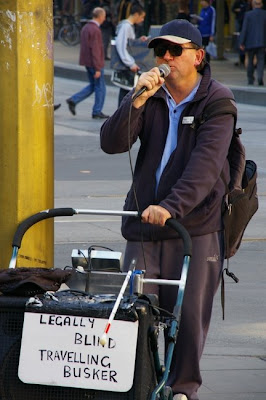 There was nothing to announce that he was open to donations, but I saw that he had an upturned Akubra hat (a quintessential symbol of Australia) above his amplifier. So I dropped a two-dollar coin into his hat and he actually broke off in mid-delivery to say "Thank you".

I then asked him if he would mind me taking some photographs and he grinned and said, "Go ahead. I’m sorry I’m not the most photogenic subject".

It was much later that I thought of an appropriate reply. I should have just said "Ah, but you’re a profile in courage." 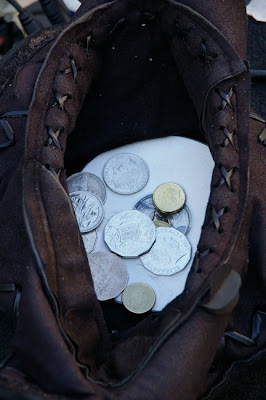 Visit the creative team behind That's My World Tuesday.
Posted by david mcmahon at 1:00 AM

Lovely post. Isn't it always the way. Think of an appropriate thing to say, when the time is past!
Great chap, that busker. Must take courage.

i loved ur title...very creative of u to link this story with such an apt title..

I like the photo of the hat with the coins in it. Nice!

And now here he is, for all to see. Thanks for sharing that. :)

You heartened him, even so. He is indeed a man of courage. Thank you for sharing this so very touching anecdote!

I'm usually a day late, it seems, to this post and the previous ones. This is precious.

Heartening, thanks for sharing.

I like the large photo on top the best. You captured the emotion on his face as he sang. I'd say you were correct, the song does mean something to him. Well done!

I agee with Ananda, the to photo shows a lot of emotion so one would think he was truly into the song.

P.S. Go visit Dances with God and see the cool poem she wrote including lots of bloggers.

"A profile of courage," what a beautiful thought. I promise to tuck it away and use it on your behalf should the occaision present itself.

enjoyed this post david and the photos. have a wonderful day.

We should always take the time to "stop and smell the rosemary". Wonderful post, David.

Great story David! Great shots too!
Thank you for reminding me that courage comes in many different ways on our journey!

So great this story and so human to think of the best answer a few minutes later - story of my life.

I was able to order your book...thanks for the tip!!

I found that very touching!~ Eddie

How cool is that?!? I love street performers and this one seems to really have it!

I am always intrigued by street performers...we have many in my little town. But to be blind as well...

Excellent post - and I love the image of all those 'funny' coins. :o)

Bravo! Bravo to the performer and bravo to you for your heartfelt thought.

Great post, David, as always and very moving as well! I'm another one that always tends to think of something that would have been cool/nice to say, but not until it's too late! Have a great week!

For some reason, I can almost hear the sound of his voice...

It feels so good to stop and just enjoy a street artist's performance sometimes, doesn't it?

"Profile in Courage" is right. Good for him. (And good for you, David, for making the photographs.)

I love your title, one of the best I've seen, may be the best.

Have a good week and an equally good June.

What a lovely post, thanks for sharing it with us.

That's a great post and the photos are awesome!

"Busker" is a nice, old-fashioned word, isn't it? You've created a great word picture of both the person and place.

Great story, David. I enjoyed the title, too.

So honored that you stopped by today, David!

As I read this post of yours, I wondered if you were going to play a recording of his singing ... would like to have heard that. But we can't all walk around with cameras AND tape recorders, can we? A bit presumptuous, eh?

Definitely a brave soul, he was! I count my blessings daily.

I like that - a profile of courage. It's always great to stop and support each other's art.

A Brush with Color said...

What a poignant story. I always marvel at buskers. I grew up outside of Manhattan and used to love seeing them in subway stations and on street corners. Some of them were phenomenally talented, and I often wondered what happened to them. Remember when Joshua Bell played in the subway station once, and hardly anyone stopped or noticed? He typically commands huge prices for his talent...

That's an interesting slice of your world. Love the post title.

Those words would have been just the thing.

Once again, David, you see with the heart! That's why you are an amazing photographer...

David, I'm glad the perfect reply is a little tardy in arriving, even for you. It takes curage and commitment to go out and sing rather than sit at home and sulk. I like the guy.

I think the most amazing street musician I ever saw perform was in Washington DC many years ago. The guy was pretty well outfitted too. Programmable keyboard and an alto saxophone. With the keyboard providing the backing, he breathed life into that sax like very few I've heard. Small wonder the road case for his keyboard was rolling in folding money. I could've listened to that guy all day.

I love buskers on a summer day shopping in the city--makes an ordinary day feel more like a festival sometimes. Bravo to 'Elvis' for sharing his talent and what he loves! I like these photos.

funny the people we run into, interesting stories themselves if we take the time to appreciate them.

very interesting story, he turned out to be a great subject!

That's a lovely post, David. I'm glad you could chat with the man and take his picture as well as help him out a bit. Sadly, we don't have many street performers in San Antonio and those who offer work for food or cash are looked upon with disdane.