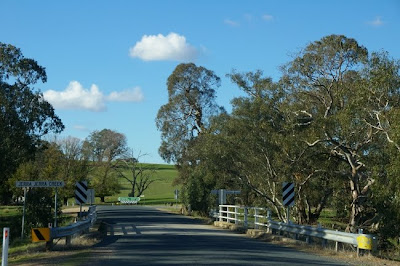 One of the joys of long interstate drives is having enough time on your hands to stop and shoot some images every times you see a sight that takes your fancy. Which, in my case, is fairly often. Oh, okay, make that VERY often.

In June this year I was driving through the lush Riverina, the picturesque farming area in New South Wales. Every time I cross the border from my home state, Victoria, I am surprised by how green it is in NSW, and this time was no exception. Even though it was early in the Australian winter, there had not been a lot of rain in Victoria, but across the state line, things were emerald green. 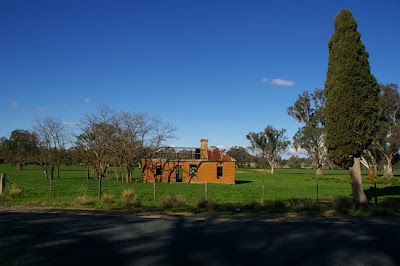 The first image was shot at the tiny Jerra Jerra Creek just outside the town of Culcairn, while I navigated my way to Wagga Wagga and then on to Temora. It was a good road, although there were some sweeping bends, so I had to make sure every time I stopped to take some shots that I was in clear view of traffic coming from either direction.

This abandoned building caught my attention, but because it was on a fairly straight stretch of road, I was able to pull over easily and shoot a couple of frames to emphasise its desolation and the sense of abandonment amid the green paddocks just off the highway. 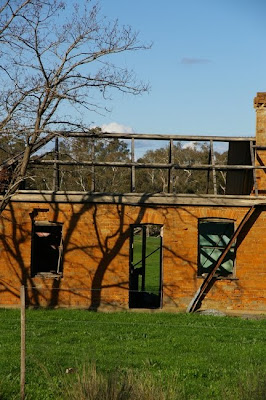 Thanks for the tour Wagga Wagga means 'Crow Crow' Really liked the name of that town.

Love these words, Jerra Jerra, and Wagga wagga, love the way they roll off my tongue! ...just practicing them is fun!
And wow! Thank you for the Post of the Day mention...that's made my day!
Will be off to see the others when I get back from work...how cool is that. Thanks David!
Bella

That grass is greener than green.

Beautiful green - a treat for the eyes. The house looks almost as though it was abandoned before construction was finished. How sad it looks.

David,
It is beautiful. Abandoned buildings always have interest, but set in a green scenic place is so different than set in a city place.

Like the other readers the names Jerra Jerra and Wagga Wagga stood out. I can't think of a name we would hear where I live that would have a similar type ring.

What is absolutely amazing to me is that this shot, as beautiful as it is, could be anywhere in the world. I could go down the road about a quarter mile and see a very similar scene...it's the sameness of our worlds which should draw us together...never mind the differences..
Sandi

Great photos as usual. Love the abandoned house. btw, the grass turns emerald just on the other side of the Kansas-Missouri state line too. Never have figured out what Missouri does to make it that way, other than it's *not Kansas*. :-)

Several have oohed and aahed over the names, which are wonderful. But I have to comment on the contrast of the word interstate with a small "i" which contrasts so totally with our Interstate with a capital "I". Actually, in our rural area, it is not so bad and I do occasionally pull over for a shot of the patchwork landscape or the birds on the river. But having driven through the city on the Interstate yesterday--well, not even you would have stopped for pictures. I did get a couple of drive-by through the window shots, though--sighting Mt. Rainier from our coach ride was enough to tell me that we were home (even though we had another hour or so on the coach and a three plus drive to our house.) Watch my blogs for our Alaska adventures.

You say wagga wagga and I say Walla Walla, (a town in Washington State where I lived as a kid for a spell). I love to take pictures of abandoned buildings, cars, etc...it gets your mind going.

I love abandoned buildings...so beautiful. Several years back I made a short film in Seattle. At the time they were revamping Bell Town and were tearing down buildings. I used the facade of a building (the rest had been torn down) as background. It was quite marvelous.

I love that the green door is the exact shade of the green grass...

Always enjoy some armchair traveling when I visit here.

This looks like a scene from good old Blighty!
Australia is so diverse, isn't it?
Great names!

I love all the names of towns in Austrailia i.e. Wagga Wagga and Jerra Jerra! But, yes, we do have Walla Walla - think they might be related?? How cool is that! And how green! Marvelous shots as always, David!

I wondered a few times what your journeys are like, and now I know..stop/start/stop/start ?
Well, a price has to be paid for those lovely photos, doesn't it?
Thanks,David, for another lovely tour, without the stops!

The brown and the blue and the green go together brilliantly in the second photograp. Simply lovely!

The abandoned building is both dead and alive. Such a story waiting to be told.

Something very salient about it setting there abandoned amid all the green.

lovely images of your countryside

David, the link is to my old blog, please note my new one.

deserted in such a beautiful spot... makes one wonder why.

There's something about abandoned buildings isn't there? They're haunting and often beautiful. I just read a 'J' post about 'juxtaposition' and maybe that's part of it, too.

Cool photos. I love ruins, and this, though not being ancient, looks beautiful against the blue sky.

I love doubled words. I'm listening to Nuggets album and it has a lot of them on the earlier Liar, Liar; Run, Run, Run; Talk Talk; Laugh, Laugh and of course, Louie, Louie, which has little to do w your lovely post.

I take pictures of abandoned buildings too! Thanks for the tour of jerra jerra!