Do Not Adjust Your Screen 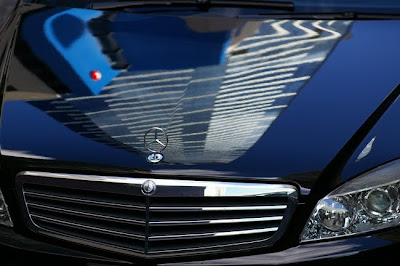 This week’s theme really got me thinking, because there aren’t really a lot of shots I’ve taken that would meet the criterion. I was starting to wonder how best to depict this – and then I remembered a couple of shots I took about eight weeks ago.

I just happened to be coming down the stairs from Southbank to the Langham Hotel here in Melbourne, when I noticed a Mercedes-Benz parked in just the right spot. Not only was it in great light and in a position where I could shoot it from above, but its hood also had a clearly discernible reflection of one of Melbourne’s most recent and most recognisable landmarks – the mammoth Eureka Building, which opened in 2006.

I took the first shot exactly where I stood and then I realised that if I moved slightly to my left, I would be able to shoot a segmented image. By this I mean the reflection of Eureka would occupy the left-hand side of the car’s hood, while the right-hand side would be absolutely clear of anything at all.

Now I can also explain why I was so lucky that the car was a Merc. The distinctive three-pointed star is a perfect point of reference. Not only does it divide the image into two clear segments, but it is one of the easiest corporate symbols to identify. 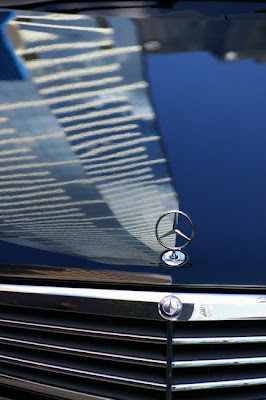 Brilliant and so well thought out!

I'm with Maggie...I would never have thought that theme through like you did!!

david, you're brilliant. i don't think you know how to think in the box...

Very clever.. that doesn't surprise me though. :)

That's one well-polished car David! Such a great shot!

And the vivid blue of the Mercedes is just the perfect color for such a shot, don't you think? David, you are touched by grace.

This post explains why I love your photographs. You tell us how and why of the composition, the focus,the choices you had, and the symbology achieved by the final shot. This shot is an art piece. Thank you.

Ooooooh. How I love those photos... reflections in 'odd' places are so cool. x

You are always right on target - the divided symbol was sheer genius.

I look at this and I wonder how they got the car so shiny. Mine never looks this good.

I won't adjust my screen, but I would like to adjust my ride! Fun shots.

This photograph is 'wonderful' and perrfect for the theme. plus the merc is a beauty. well done, David.

Intriguing response to the prompt. Love the sense of illusion!

You are creative for the theme...happy hunting and weekend. Mine is ready.

Struggling with a sad day and night....your photo lifted my spirits. Thanks, David.

great shot david. such the artist.

Incredible photo, building, and car! It was a lucky shot, for sure. Have a great weekend, David!

Cools shots and a great take on the theme

I like your different approach to this theme.
Very cool!

Very Unique...and I like that you tell us how you do that...

hmmmm....don't know what caught my attention more..the reflection or the car :D

You are soooooo very good.

Great shots, like usual. I'm not sure why being able to identify the corporate image is so important, though.