A Taste Of History (Right Here On Our Streets) 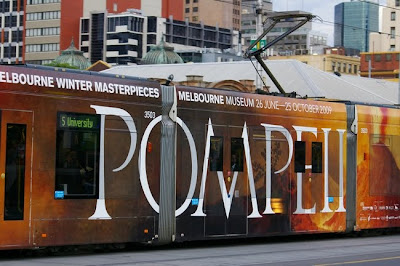 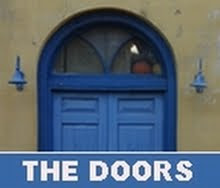 It’s not often I get to photograph a door that is actually in rapid motion!

I was walking across Princes Bridge, looking across the river, just to ensure I wasn’t missing any great sights, when I heard the familiar rumble of an approaching tram. Normally I wouldn’t have given any form of public transport a second glance, but the unusually dark colour caught my eye.

I immediately realised it was a tram that was specially painted to advertise the Pompeii exhibition that has been extremely popular here in Melbourne for the past few months.

Taking a shot, you might think, was no big deal. But there was traffic on both sides, there were cyclists, there were skateboarders, there were pedestrians. And it seemed as if they had all descended on the scene at precisely the time I wanted to photograph the tram for The Doors meme.

For earlier posts in this series, check out The Doors Archive.

And leave it to the Professional to get the shot! A great shot it is, too...I'd love to be riding that tram!
Sandi

They ALWAYS do that.

I saw that exhibition in Los Angeles years ago; it blows my mind. Even the real Pompeii doesn't provide all those historical artifacts neatly organized and showcased. To think the world was so complex two-thousand years ago!

Doors, great theme and the answer to 'when is graffiti art?'

Hope the dust storm doesn't come near you.

Well if you can't do it, David, then nobody could!
Glad it worked out so well. People will get in the way & cause a nuisance!

I think I'd have given up before I began, but I'm glad you didn't. Another superb shot, David.And a clever way of advertising the show.

The colors are what caught my attention on my blog roll. Great shot!

Ooh. On first glance it looks like a building. Fun! Well done on getting it...

Great shot David, and some great marketing on the exhibition's part.

Oh we had the Pompeii exhibit here at our museuem a few years ago. Waht a great Metro!!!
V