Roll Up, Roll Up, For All The Fun Of The Fair 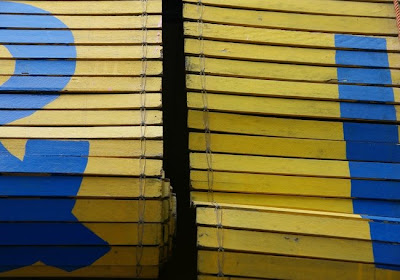 Sometimes you find a photograph where you least expect it. While we were in Langkawi last month, I was waiting outside a shop when I noticed these rolled-up wooden blinds. I was looking at the pattern of the parallel slats, trying to figure out what type of wood they were made from.
Then I noticed that the blue paint was marginally brighter at the middle of the blinds than it was at the top.
So of course I had to take a couple of shots, because the colours made such a striking contrast against the dark background. And yes, I shot the frames to emphasise the fact that some of the wooden slats had warped while the others had remained unaffected by the weather. The lines were irregular, rather than strictly geometrical - and that just made a great image in my mind. 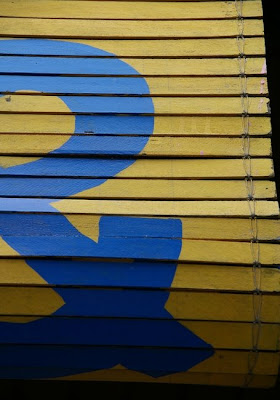 (The Odd Shots concept came from Katney. Say "G'day" to her.)
Posted by david mcmahon at 5:30 AM

Labels: All the fun of the fair, Blind guess, Katney's Kaboodle, Langkawi, Odd Shots, Roll up

Are they made of bamboo? We have similar roll ups as bedroom window blinds and our's are bamboo or maybe faux bamboo .. ummm .. I better get a panda to check that out for me

Chuck, Seattle often says he is drawn to bold colours. It is striking and as you say, photographs often appear by themselves.

Those are great shots. Is the color brighter in the middle because of the way the blinds get rolled up, and the sun bleaches the other part?

I bet my odd shot blue is the same color but mine is a living thing. . . even tho part of it is missing. lol

Drop by and see it.

Oddshots eh! Sounds like fun. I think all of my shots are odd, but not necessarily in an artistic way unfortunately.
Cheers

Interesting shots, even more so after reading your comments on them! Thanks for stopping by my blog and leaving such a lovely comment!

What crazy thoughts go through our minds.....and you actually act on them! Interesting shot!

Once again, I enjoyed seeing how you took a picture of the ordinary and made it extraordinary. Many people would have just walked on by. I also enjoy the blurbs and titles you write for each photo - it adds even more depth to the story. Enjoy the day.

You do find the most interesting and unusual things to photograph...

As usual, you've taken the ordinary and brought it to our attention giving us a different perspective.