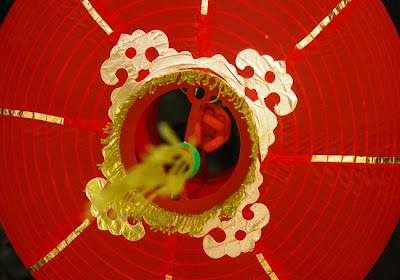 Photographs copyright: DAVID McMAHON
In keeping with the theme of the Beijing Olympics, I thought I'd post this photo which I shot in December in Singapore. I had just emerged from a railway station and I was waiting for the rain to stop when I noticed this long walkway with an interesting roof line, dotted with lanterns.

The shot below shows you what attracted my attention to the sight. It was an interesting sight, because of the long row of fringed lanterns, but there was a complicating factor. Although the angular wooden beams were dark, the light coming through the open walkway was very bright.

To overcome the problem, I decided to take a shot looking straight up at one lantern. As you can see, I was directly underneath it, which is why you can hardly see the long tassels. I reckon it works, simply because it's an unusual angle, and because the red and gold are so effective. 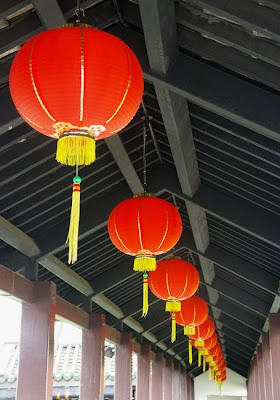 These are great shots. I love the bright color against the rustic background.

That second shot is stunning!

Just beautiful. Did you see the opening ceremony? It was amazing.

Way to cool... But what does firectly underneath it mean??? Perhaps a typo lol lol lol

By the way, I have awarded you the 'Brilliant Blogger Award'

I love both shots, but especially the first. The red and gold and the design on the lantern...it all works together.

You have an eye for wonderful eye catching photos......very nice, David.

Gorgeous. There's no denying that colour!

wow, these are great hots, especially considering the difficul lighting.