All Bovines Deserve A Stable Environment 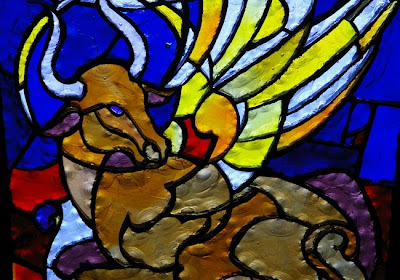 Yesterday, I was taking photographs at St Paul’s Cathedral when I suddenly noticed this section of a stained-glass window near the main entrance. If you're wondering why a humble cow should be featured in a place of worship, there is a specific reason.

If you remember, there was no room at the inn and Joseph and his heavily pregnant wife Mary were allowed to shelter in the stable. As the words to the beautiful Christmas carol remind us, it was just a "lowly cattle shed" where "the cattle are lowing".

Every year when I was little, our Sunday School class regarded the Nativity Play as the highlight of the year. Every student played a part - and a major highlight of my own theatrical progress was when I made the giant leap from playing the role of a cow to the year I was promoted and played Gabriel.

A few months ago, when I was in northern India for five days, I saw a scene that would have to be fairly rare in the twenty-first century. On a busy national highway, in the mellow light of a late winter afternoon, the flow of high-speed traffic was significantly impeded by a procession of bullock carts carrying heavy loads. You can see the photograph at What A Load Of Bullocks.

Here's a thought. Maybe Hugh Hefner would have had to change his name if he had started a farmyard magazine instead of Playboy. He could have swapped his given name for Hugh Hoofner.

Beautiful example of stained glass work, David. Did you know that stained glass windows are meant to flex a bit, but that too much will destroy them. So, to stabilize the window, through some of the seams there will be a thicker bit of "came" (a channeled lead strip) or a thin rod so that it can withstand the weight of itself and any wind that might blow against it.

Different colors or types of glass have different prices. Can you guess which color glass is the most expensive?

Hahaha! It's a lovely window, but I'm laughing about your promotion from cow to Gabriel. Now that was a leap...of faith?

i love stained glass windows! this one is beautiful too.

Love the colors in the stained-glass window. Hugh Hoofner?! Hahah! Time for me to MOOOOVE along... have a nice weekend David!

David: That is a holy cow, I can see the wings. Fun story from your childhood.

We don't see a lot of stained glass windows here as most churches are just big buildings. But I have seen some when in England, France, etc. And I'm always so in awe of them. Must say that I've never noticed a cow amongst the pictures, though. I checked out your story about a lot of bullocks. Very interesting how you feel about India. I cannot imagine it as other than dirty and smelly, but I do know that's wrong cuz so many people say it's so beautiful.

I was in a Nativity Play one time. I was to be an angel and just before going on stage, one more little boy showed up. The only part left was a shepherd. He started crying that he wanted to be an angel....so I volunteered to trade places with him. So, I was a shepherd! That's me....always trying to be the peacemaker. It hasn't always worked out with nice memories...but I digress.... :)

A beautiful shot of stained glass with fond memories of school plays. You must have been good - that's quite a promotion! I don't think I ever quite made it to Gabriel... ;0)

Just catching up on blogs now and my critter post has just gone up too.

This glass is beautiful.

A fun childhood story. You were demoted from a cow to an angel?!?! And you came out ok?

That is a splendid shot on the stained glass!

Here is where I posted my critter for this week. Hope you can stop by. Thanks!

I LOVE stained glass. In fact, when we remodel the loft of our barn into the combination recreation room/office/photography studio, we want to have a stained glass window made with our farm name and a cow (of course... although I'd have a Border Collie if I had my way hehe) :-D That is... IF we ever get around to remodeling the loft of the barn hehe.

Just how many puns! Big fan of stained glass but never imagined it would play a part in the critters neme. wonderful lateral thinking again.

That's a beautiful stained glass window, and a creative Camera Critters capture. I suspect that, St. Paul's being an Anglican cathedral, the bullock with wings may also represent St. Luke the Evangelist -- but I like your version just as well.

What beautiful stained glass! Wonderful story. If I could, I would love to make one of my windows a stained glass piece here in my home! What a delight that would be!
Mountain Retreat

I went bqack to see your load of bullocks. One of the fondest memories of my month in Inida several years ago (aside from the people) was the variety of traffic--and the bullock carts. I was in Tamil Nadu, and perhaps that more rural area had more bullock carts.

We were told that often a group of carts would travel together, taking turns in leading the group or follwwing and taking a nap.

And we were told the story of a man who set out to market with his bullock cart and fell asleep. The bullocks, knowing the route, traveled to the market town with the driver still sleeping. His buddies, as a prank, turned the cart around and the man woke up back at home.

That's a unique and wonderful take on fulfilling the Camera Critters meme! Thanks, I enjoyed that.

This is a gorgeous window, David. I'm intrigued by the texture of the glass around the leading.

The colors are rich and beautiful. Thanks for sharing this gem.

tee hee...I didn't read all the comments so someone might have said this before, but I think Hugh HEFER would have been a good name as well. :)
hope all is well with you and yours!

If that's a halo and wings I see on that bovine beast, methinks it represents Saint Luke, the writer of one of the gospel accounts.