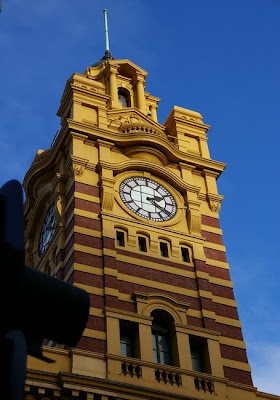 About a month ago, I’d planned to take a lunch break and to walk out into the city with my camera. But the weather closed in, not surprisingly, because we’re still in winter here.

The rain stopped just after two o’clock and so I ventured out, ready to seek shelter if the weather deteriorated. I only spent about half an hour in the city and was on my way back to work. I had replaced the lens cap on my camera, but I was still looking around for any unusual shots.

Because it was very windy, a tiny patch of sky began to clear as I walked down Elizabeth Street. A couple of minutes later, by the time I got to the pedestrian crossing at Flinders Street, I could barely believe what I could see. The little patch of clear, unsullied blue was almost summery in its intensity – and it sat regally above the central clock tower of Flinders Street Station.

While I waited to cross the street, I knew I had to take the shot. Off came the lens cap and I fired the shutter exactly where I stood, using the zoom to compose an unusual view to include the silhouetted outline of the traffic lights to the left of the frame.

A couple of minutes later, I was back at my desk at work and showed this shot to a colleague of mine, a graphic designer who is also a keen photographer.

"Coupla minutes ago," I explained, as he shook his head in disbelief.

You see, the huge window near our desks gave us a splendid view of the Melbourne skyline, completely shrouded in grey, threatening cloud cover.

I guess it’s a bit redolent of life experience. It doesn’t matter how many problems loom on the horizon, we just need one solitary, brief flash of clarity or inspiration to see our way forward.

Posted by david mcmahon at 7:15 PM

Love this pic, and really enjoyed the story behind it! Some of my best pics of skies seem to be when the weather is changing her mind!

i guess we're bound to see something beautiful and interesting when we leave our desks once in a while.:D great shot!

yesterday was forecasted rain here. but all day was *actually* beautiful. so i love that i never trust the forecast.

That's a great moral for a terrific picture. Your colleague must have been shaking his head...

The picture is fabulous. The blue sky is incredible, and love the graduated shadow on the building.

The commentary is equally wonderful. Oh, so true!

Beautiful picture and beautiful story. Just what I needed this Friday morning.

Very interesting story and photo. You have to be ready. Sometimes those light situations last for only a few seconds. Pappy

David, the photo is beautiful. "We just need one solitary, brief flash of clarity or inspiration to see our way forward". It sounds so easy. I need to take the time to do that more often! Thank you!!

Very great shot! Glad you were able to take the shot despite the not so good weather.

My PSF this week is posted HERE. Please check on it if you can. Happy weekends!

Fantastic post David!! And you're right. All we need in life is tat small moment of clarity. Brilliant!

It's so striking, it almost doesn't look real. Good to hear the stories behind the shots.

You truly are an inspiration, David, and not only in the area of photography. I look forward to reading the short essays that accompany so many of your photographs, and always take away something special in my mind and heart. Thank you.

What a lovely post, David! That last paragraph is just perfect. And so true!
Wonderful shot! :)

The blue is really quite strikingly vibrant. Not like you need the kudos, but kudos.

what a wonderful blue sky and a very cool building. Great photo.

This is a simply beautifully captured shot & loved reading the documentary...Excellent!

I have posted a tale of a brave Indian soldier. You can have a look at it.

this looks almost unreal... great shot and love the story.

A lot of us struggle for long periods of time without a moment of clarity.

That is a great picture. I love the clarity of the clock tower and the sky. For some reason it made me think of Peter Pan. :-)

Even without the explaination I thought it was a grand shot. It is so true, no matter how hard life has gotten for me, there have been those times that remind me how wonderful, and beautiful life can be and I am able to go on knowing this too shall pass! Thanks for sharing.

Hey David. Thanks for the friendly comments you left me. Yes, I'm sure I may want to pick your brain for some photog-advice. I've set up a new blog to put my pics on. Check it out if you have time. I put a link to your site, as I love checking it out. Hope this is ok.
Have a wonderful Friday!! Leigh

Love the color in that shot!

I agree - a brief flash of "bright" can make the day! Love that clock tower. The one in my little village is always broken so they've now removed the hands. It looks ridiculous now in its naked state. I should photograph it! There...I just had a moment of inspiration...thanks David! ;)

Isn't that just the cat's meow! I want to be a weatherman too and get paid to be right or wrong or whatever. :)

"It doesn’t matter how many problems loom on the horizon, we just need one solitary, brief flash of clarity or inspiration to see our way forward."

now that is worth quoting!

I enjoyed the picture and story as well....smile.

Great shot! We are more likely to have that kind of clear blue sky in winter than summer.

I was saying - that was very well written and very true.
If only I could learn to use a viewfinder on my life now...

Beautiful shot, and a beautiful bit of insight to go with!

Ain't that clearly the truth.