Street Musician Brings Harmony To Us All 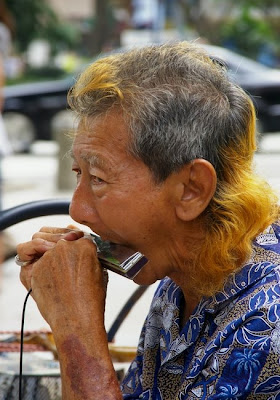 Sometimes a late reaction is better than no reaction at all. Mid-morning on 15th December, I had a couple of hours to kill in Singapore before catching a connecting flight further east. Rather than spend that time indoors, I caught a train to Orchard Street, an area that used to enchant me when I was in primary school.
The street, as I expected, was a rainbow of living colour, with Christmas decorations as far as the eye could see - so of course I walked briskly from one end to the other, shooting as I went.
I chose to capture not just the vibrant colours, not just the wonderful Yuletide sights. I wanted to capture the broad spectrum of life in the island state - its many subtleties and its many faces, its corporate wealth as well as the everyday scenes of its people. I stopped to shoot colourful garbage bins, I stopped to shoot a Buddhist shrine, I stopped to shoot unusual colours, I stopped to shoot the faces around me, for each one told a story.
In my hurry to cross an arcade, I almost missed seeing this man. I was about to walk past when the sound of a harmonica stopped me in my tracks. He was just playing, lost in his own world, as the shoppers and the tourists and the city workers brushed past him on either side.
I dug my hand into the pocket of my jeans and put some money into his open music case. He nodded and I reckon I must have taken three or four strides past him.
Then I turned back. I was, after all, trying to capture the many faces of Singapore - and he surely was one of them. I asked if I could photograph him and he nodded without missing a note.
Much later, when I had time to think aboard the next leg of my flight, it struck me that I should have taken the time to speak to him. I don’t know his name, I don’t even know how old he was. I didn’t know whether he took his spot on the pavement every day.
He seemed to have no teeth, yet he wore the attire of a young man. His face and arms were wrinkled, yet his wiry physique could have belonged to someone much younger. His neck was lined and weathered, yet his hair would have fitted comfortably on any rock star.
Maybe even the shirt, too. 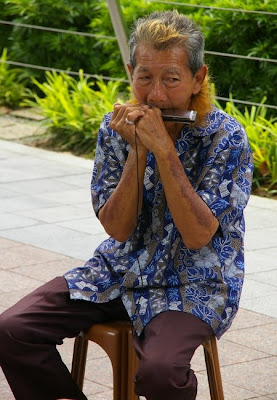 Visit TNChick, the creator of Photo Hunt.
Posted by david mcmahon at 5:30 AM

People are so interesting if we pay attention to them. I'm glad you do and share them with us from time to time.

the guy looks quite a character... great shots and story

I love pictures like this...a click and there is a story. He is fifty years old, lived on the streets all his life, sleeps in a doorway, loves rhythm and blues. Found a mouth organ and by some miracle he could play it, doesn't care if people give him money or not, just as long as he can sit on a corner and play the music he hears in his head. Or he is twenty five, lost all his teeth as a child through malnutrician, hence his dehydrated skin. He plays to feed his mother and father and grandparents. Or he is an eighty year old hippy, stoned out of his mind still playing the music he hears in his head.

These are the best kind of portraits and are often the least expected but the results speak for themselves. I like pictures like this and we used to have some people who sort of hung out at different places but I don't see them anymore. I suspect they were rounded up last winter and sent to some kind of care facility.

He looks a real character. Made a good photo.

oh wow. I am learning so much from you. I love what you I see in his face, and what it makes me ponder about his life. Great PSF!

His hair is fantastic - love his look.

But what makes people interesting, is sometimes their anonymity. Being able to be appreciated for what and who you are without labels is precious.

You have given him that gift, and immortalised it here. Great shots. Great writing.
Again.

(I have now met you. In blogger fairy person. Pop over to mine when you have a mo. And read Holly's version too. Oh! And I said Holly to hello....[smile])

David, you may have missed speaking to a very unique individual. His looks do speak of a half-dozen contradictions. However, in the missing, you are allowed to make up your own details, and as such they will likely not disappoint, which reality has a tendency to do.

Interesting guy and he looks like he can really play.

You always give me ideas to play with. Maybe I'll go down to the "bad" part of Vancouver and take some photos - black & whites.

People are very interesting to watch. thanks for taking the minute to snap his picture to give as something to think about.

nice wrinkles and good shot:)
very cool.
Do you always ask? --I am trying to but do not always get the shots I wish I could

Stop by and see my cute dimpled /wrinkled three generations/

You are oh so right about subtleties in faces - You'd have lost had you not captured that - almsot finsihed with training a few more days - have no photos that size .Thank you fro inviting me zx

Well David. You learned quite a bit from this picture didn't you?
We all have a story don't we?

He looks pretty cool for an old guy doesn't he?

Nice shots! I love the first one in particular.

That's a great photo and a great story. Thanks for sharing.

My Photo Hunt is up, too! Please visit and leave your link. :) http://newyorktraveler.net/photo-hunters-wrinkled/