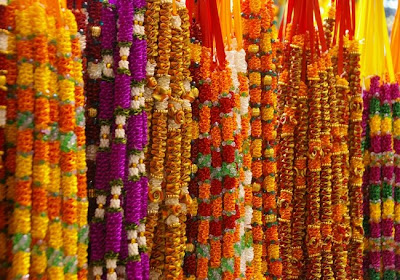 This sight of hand-crafted garlands from fresh blooms drew my eye immediately - because it looked for all the world like a waterfall of every colour conceivable.

A few months ago I was in Singapore for a little more than 24 hours and so I used that time to walk as many miles as I could, taking as many photographs as possible. Late in the evening, long after the sun had set, I was still soaking up all the experiences of the streets of the island state when I happened to see this pavement store. In retrospect, I reckon it was the scent of the blooms that drew me towards it. 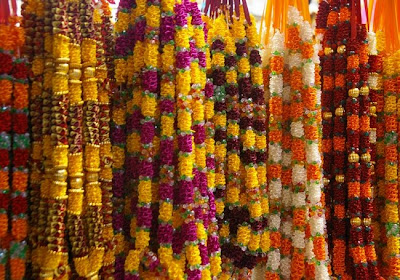 You see, I grew up in India, where the smell of many tropical blooms was a scent that even the most experienced perfume-makers would find impossible to bottle. You could blindfold me, take me to those lanes and I would know immediately where I was.
So I began talking to the proprietor of the store. A gracious man, he told me that many of the blooms were imported from India - just as I had suspected. How many times a month did he import them, I asked. I thought he’d reply that they had one consignment each week.
Nope. They imported the blooms every day. And they sold as quickly as they appeared. 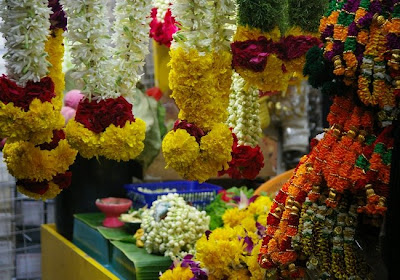 You make India seem more magical to me, which is no easy task. I love these pictures!

One question...why no India in the Olympics?

how beautiful! what are they used for?

You travel so much! I love the colors in these pictures.

A Cuban In London said...

You took the metaphor out of my mouth, david. When I first saw them (without reading your words) I thought that the way they cascading down was marvellous.

This is beautiful. I wish it was scratch and sniff!

this is just wonderful! it must have been a real treat for the senses.

The photos are great, I love how you link scent to memory. I believe we have lost most of our ability to identify by scent, but it is very much linked to our memory and we are not aware of it. Debs x

those garlands are just so gorgeous. i can almost smell the pictures!

Incredible photos and interesting story to go with it. Love this one!

Beautiful colours. They could only be enhanced by their scent.

Wonderful colours but I bet they don't last vey long.

I figured out that they just don't show any of the sports that India really competes in on American television. It seems really odd to watch hours and hours of a major international event and never see anyone from India. Curious...

Great colors. I've always wondered how they put those together without the flowers falling apart.

About the primary color scheme ... was Clementine having a tangerine dream?

How lovely! I've always wanted to go to India. One of these days...

Okay, that just hurts my eyes!

Bursting with an absolutely beautiful rainbow!

They are beautiful! I only wish I could smell them!

I wish blogging had the ability to use all our senses.

David: A very colorful post and the smells must have been special.

I learn a lot from your posts....Singapore imports flora from India...who knew?

Looks like the India version of American "Indian Corn" it the color....great photos David!

Wow David! What an incredible amount of work they put into those and they are gorgeous!

I wonder who buys them and what for?

They are beautiful. You can almost smell them through the net!