No Paint, No Gain

See Why Dawson City Has A Colourful History 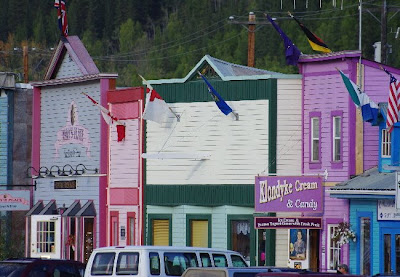 Tonight I'm in Dawson City, heart of the Klondike - and I thought it would be the perfect subject for today's Photo Story Friday post. First of all, I'd like to provide an answer to the many friends who asked what I'm doing here in the Yukon - there is a very simple answer. I'm extremely privileged to be here as a guest of Yukon Tourism.

I've spent time in this territory before, but this is my first time up in Dawson. It's a place I've read so much about and an area whose history I know so well. As we drove towards the outskirts of the city today, after a 460-kilometre journey north from Fox Creek, I must admit I felt as if I was actually entering a place I knew well, even though I had never set foot on her soil before.

I dropped my bags off at my room and immediately I did what any self-respecting photographer would do. I picked up both my cameras and headed out to capture the essence of this frontier town. Did I want to drive? Naaaah. As most of you know, I prefer to walk, because this way I can stop wherever I want and shoot whatever catches my eye.

Mate, let me tell you there is a lot that catches the eye here. I chose not to walk down the historic streets. Instead, I chose a pathway beside the mighty Yukon River that was the scene of many tales of pure adventure during the gold rush. I chose to walk alongside the fast-flowing waters to my left and shoot a frame every few steps, because I was totally intrigued by the paintwork on the buildings along the main street.

It was just after seven o'clock in the evening, but the light was perfect, as I'm sure you'll agree ... 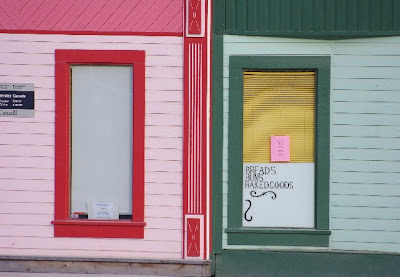 It's handy, on a trip like this, to have two cameras. I have my 18-125mm lens on one Pentax and my 70-300mm lens on another. This enabled to me shoot a variety of focal lengths and compositions without having to stop and constantly change lenses on one solitary camera.

The first shot in this sequence was taken looking down the main street, while the second was taken about 100 metres away. Having the 300mm lens meant I was able to compose a really tight shot, highlighting the contrasting colours of two adjoining shops.

In the last shot (below) I zoomed in from a long way away. Initially, the red T-shirt and the olive green T-shirt worn by the two blokes on the white chairs had caught my attention. Then I noticed the other bloke walking towards them, so I just waited till he walked into the frame. It's a completely candid shot and it's interesting to note, in retrospect, that all three people are looking in different directions. 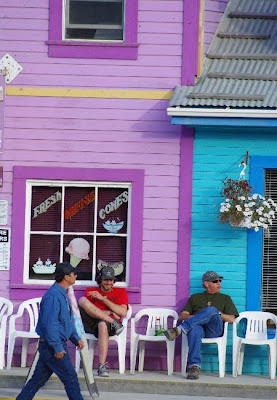 Gorgeous! And they were very smart to have you as their guest-- who could offer more unique, beautiful shots of the Yukon? I love the colors!!

Wonderful story. I love that last shot. The colours, the people, the whole composition.

I am beginning to take more note and understand more when you talk about the different lenses. I was only ever familiar with a standard 50mm and a zoom lens. I am learning more and more now...

I just love colour, without it in my life, it would be more than dull, on so many levels.I wonder how many of your fellow bloggers travel viacriously through you.

l am lookingf orward to your next set of images.

So why do they paint their buildings such bold colors? Reminds me of the old Outer Banks. (The multi-million dollar beach houses now are bland colors of beige and gray).

here's a place that would appeal to both my mom and i. the many colors make the town look tie dyed. that purple houses can easily found would make my mom happy.

David: Cool photos of a colorful town, and your their guest. You are the lucky dog.

It really pays to have the camera handy. I love the pictures...

Here's my PSF for this week: Jenn Was Here. Happy weekends!

Have you had the Sourtoe Cocktail yet?

I loved that place.

You know David, it's how I've always imagined a wild west town, not the drab colorless places we see on the old black and white movie screens...but colorful and full of life...otherwise how could everyone be rushing to "go west young man"?
Sandi

What a wonderful colourful place, and I love the name Dawson - it was my maiden name! :)

So beautiful and colourful!

fabulous!! You are so lucky to see these gorgeous sites!!

Those remind me a little of the Painted Ladies in San Fransisco. Only these are even more vibrant!

Welcome to Canada
Enjoy your time visiting with us.

AWESOME SHOTS. I've been there and I gotta think you're in photog heaven - isn't it awesome?

Oh and welcome to our continent. :)

Lovely shots, David! I really like it when towns paint their buildings all different bright colors. The grey of cement and brick is SO boring.

Great narrative, as always. And spectacular pictures! You've got such a great eye for unusual things that end up making great photos. Love those colours! But then, since the natural scenery around there is somewhat monochromatic most of the year, it makes sense to paint buildings in all manner of colours!!

Hope you're enjoying your time in Canada!

marvelous color. I want to go there after your story sk

Eye catching, hope you're going to be posting more.

Amazing! I love the photos! The colors are just popping out everywhere. Is that near Banff? I've seen pics of Banff and it's more than beautiful! Have fun! Great photos and great story!

Wonderful to see some colour today, even if it is through your post. Another grey day here! Looks like you're enjoying your sojourn there. :)

Excellent photos. Have a great time up there!

what a charming city, and your presentation is just stunning!

Great colours and fabulous shots - I like the way that you explain what you did, it makes it so much more interesting!

This looks like a fantasty movie set, not a real place. What a paradise for a man with two cameras!

No wonder the three guys are each looking in a different direction -- there's so much to see! I love those old end of the road towns. The best part is, usually, they don't seem quite respectable yet.

You are the colour KING! Gorgeous. I want to visit! I also want your job! (or Kath Lockett's she gets paid to eat chocolate)

The colors are amazing. What contrasts in such a short amount of steps! The last one is fun with all the colorful shirts and heads in divers directions..... I love to see things thru your camera lens!

Love the happy colors. Reminds me of my days in San Francisco. The Victorian and Edwardian architecture were grander, but the sherbet colors are very similar.

what a cute little town. i am going to now paint my house one of these colors and insist my neighbours follow suit. it's the least they could do since i (a dream neighbour) put up with them (not so dreamy).