What Is This Mystery Object? 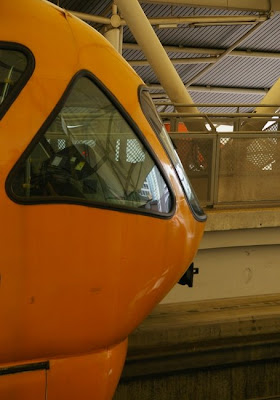 What's mustard-yellow, shiny, has glass panels and moves very quick? I'll let you ponder the challenge before I give you the answer.

Is it a superbug? Is it a UFO? Is it a helmet belonging to one of the Mighty Morphin Power Rangers?

Very often, an everyday object takes on a completely different look if you shoot it from an unusual angle. I took this shot last month while I stood on the platform at Bukit Bintang station in Kuala Lumpur. My family and I were waiting for the monorail when one pulled in on the opposite platform, going in the other direction.

I had my camera around my neck (hey, I was a tourist, okay?!) so it just took me a couple of seconds to work out how to take the shot to best effect. Rather than shoot a horizontal frame of the very recognisable shape, I opted instead for a vertical shot so that the metal and perspex formed an intriguing view.

Let me tell you, these monorails don't spend too much time at stations. A few seconds after I had taken this shot, it was off on its concrete rail and our train was approching.

(The Odd Shots concept came from Katney. Say "G'day" to her.)

I was going to guess a gondola car the sort used at ski resorts .. or here in NYC the Roosevelt Island Tram is a gondola ...

but I was WRONG

I was going to guess a metro front car. So I was on the right track! Get it? LOL

I saw your Glass Eye photo of the wine glasses. For 31 July I did something similar for my post called The Dog Days of Summer. It is about the rose' wine rage in France today.

And I recognized immediately that that was a subway car. I like the bright color. That would wake you up on your morning commute.

And just noticed that you blogged about Old Man Lincoln's Blog. That's wonderful. He has a very populer blog that showcases some mighty fine photography!

I said train as soon as I saw it.

You will have to fogive me for being a country bumpkin for not thinking "Subway" train.

My Odd Socks --er, Shot on Monday will appear around midnight my time--but you know that already.

I guessed a helicopter so I was sort of, kind of close. As a truly beginner, wanna-be photgrapher I am in awe of the fact that the picture of a moving object is so clear. I love the color.

Yay, I guessed it this time!

I, like Debbie, was going for a helicopter. One of these days, I'm going to get one of these right.

I'm beginning to think that you have your camera around your neck all the time. Does Mrs. Authorblog complain about you sleeping with it? ;)

Nice shot! It did look like a train to me.

Hve to admit funky helicpter came to mind. It reminded me of the kind I see doing trips around the island.

At first glance, I was thinking the nose of a helicopter.

Nice way of going outside of the box.

Ok honest, my very first thought was one of those little submersibles. But then I saw the train rail and snickered.

Good thing it's yellow or one might miss it since it's so speedy!

I got this guess right. It is really a good photoshot.

I didn't think of mono rail but thought it was a sort of tram. It certainly looks fast.

Man I wish the US's public transportation was as good as...everywhere else.

I don't know...
Happy Monday. I always look forward to seeing what people come up with. My fingers are not cooperating today so the general note. ..Michelle..
Rambling Woods

great shot. I was going to guess a helicopter.

Very odd indeed. I would never have guessed that. My 1st thought was a ride at an amusement park.

My, what a vibrant, round nose it has! Reminds me of illustrations by Richard Scarry (one of the piXie's favorite authors).

I couldn't make up my mind if it was a monorail or a helicopter, so I scrolled down to find out. Great photo!