When Did You Last See A Nuzzle Like This? 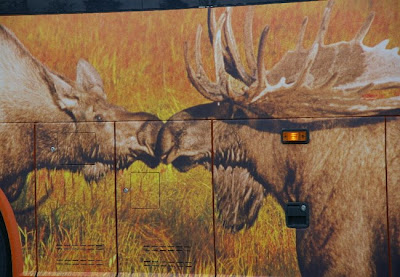 Sometimes you see the best sights in the strangest places. Just over 24 hours ago, I was about to take a series of photographs of the Tintina Trench, here in the Yukon, when this caught my attention instead.
Okay, so you're looking at this picture and you're so observant that you know something doesn't quite add up. Correct?
You're 100 per cent right. Because I didn't really photograph two "live" moose exchanging a gesture of affection. It was just a mural on the side of a Holland America cruise line coach. 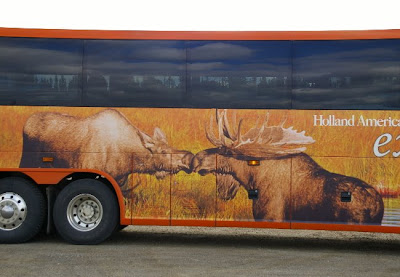 Check out the rules at Camera Critters or go to Misty Dawn.
Posted by david mcmahon at 3:00 AM

You fooled me at first I thought it was a puzzle !!!!sandy

The reflector light on the moose's shoulder gave you away, David! Nonetheless; kewl capture! I wonder if real moose really do that?

I hope you get to see some live moose while you're out and about!

haha! i thought they were real too!

LOL Nice to know they paint buses in the Yukon too. :) Great shot, David!

This is really cool looking. Hope you are having fun on your vacation. Lisa

I LOVE that nuzzle!! Very cool mural, I had no idea it was the side of a bus. Very, very cool CC share!

Well, it's a beautiful nuzzle anyway. Pretty nice mural for the side of a bus.

You had me that time! I wasn't sure what that was. They are a handsome pair of sweethearts!

Wonderful mural cleverly captured. Love your photos and am enjoying your blog very much.

And as always, another critter that is a critter, but is not.
Great post David.

Why that is a real muzzle-nuzzle if I ever saw one! Hope you are having a good time. The skywatch comment I sent bounced back .. I'll try re-sending.

Have a wonderful weekend!
My Camera Critters Here and Here

didn't notice until you mentioned it. I've been told on several occasions that I'm not observant enough...i guess they're right.

I thought it was a display in some type of nature center or something of the sort. That is rather cool on the side of a bus though. Nice shot.

Wot a smackeroo and on a bus too!
Very cleverly captured wildlife!

Very eye-catching - it might cause some traffic accidents though!!

Are they kissing under the Moosletoe? Nice shot, David!

Sweet! And it might be real, just not taken by you!

Great photo! Thanks for sharing. Stop by and visit with my Camera Critter, too!

I was convinced this was jigsaw puzzle. he old adage that the camera doesn't lie is so evidently not true here. Your'e such an observant soul.

You're in Alaska! How great! That is a wonderful shot of a great bus. I see cows and sheep behave like that, even deer. I hope your trip is fantastic. I didn't go anywhere this summer but that's just how I like it!

That is a fantastic mural! Wow - it's truly awesome!

Did you see my howling wolf over at Misty's Words, David? It's a Camera-Critter which is one I think you will appreciate. ;-)

I've dreamed about the yukon since I read Mr. Mike as a little girl -- how fun to find your blog!

I would like to be on the Holland America coach on my way to the boat!

Do you EVER take pictures of real animals for Camera Critters? You always have unusual things, creative things. I think I would be surprised if it was just a plain ol' critter!

I know you are a busy busy man...but I'd be honored if you'd check out my Photo hunters this week. :)

lol My first thought was a puzzle or a painting of some sort.

I thought it was a billboard, until I scrolled down to find it is the side of a bus!