When The Sky Is Soft And The Hills Are Blue 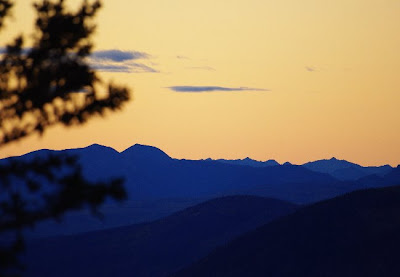 Just a few hours ago, Margaret Goodwin of Yukon Tourism drove me up to the top of The Dome here in Dawson City. We joined about eight other people watching and photographing the setting sun and I was able to shoot some memorable images of a golden sunset that looked as though someone had poured a molten ingot across the sky.
A few seconds after the sun had disappeared slowly over the horizon, I scrambled up to the very pinnacle - and that was when I looked all around for the first time. Because I spent my high school years in a wonderful boarding school in the Himalayan town of Darjeeling, I am accustomed to the wonderful post-sunset colours over a range of hills.
But here on The Dome, I experienced something very rare. It's not often a city slicker like me gets to stand on such a high vantage point - and be able to look at a ring of peaks all the way around, for an entire 360 degrees. At every quadrant of the compass was a vista even more breathtaking than the one before.
After the true sunlight began to fade, I spent several minutes in the soft lingering embers of the day, shooting into the valleys and across the now-silver rivers snaking across the landscape. Finally, I put the lens cap on both cameras and carefully negotiated the scrabbling shale down the hillside to where the car was parked.
Just before I opened the door, I looked back across the valley where the sun had disappeared, and I was awe-struck at the many tones and hues of blue that briefly played across the hills. The closer hills were darker than the rest, while the furthest peaks were lighter in colour. The sky still had some remaining vestiges of colour, but I wanted something more to help me frame this stunning scene.
That's when I noticed the branches of a spruce tree nearby and it just took me a few seconds to work out exactly how I wanted to capture the arresting beauty of the scene in front of me. I shot this with my 300 mm lens - and no, it's not enhanced in any way. There is simply no need to use an electronic program of any sort to try and improve on the power of Nature. 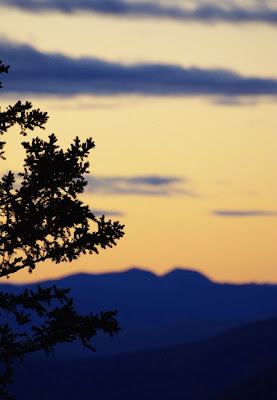 OMG David ..its amazing, the hills are blue.....its like aneagtive, but a positive..
l have no approprtiate words, its stunning....
l saw years ago on tv...I have been trying to find on the net a Yukon artist, the name escapes me, but the images have stayed with me....
and you have captured their essence..

David, I feel like I HAVE to visit your blog every single day, just to see what you're up to. Sometimes the visit is rewarded with your humorous witticisms, and sometimes by stunning beauty like the photos you display today. Thanks for the way you bless us all!

you have captured incredible beauty that leaves me almost speechless!

Great shots of the blue mountains against the sky! We get the blue effect here on the east coast, but not so strong as you have captured. I also enjoyed your post on Dawson City.

These are really beautiful pictures!!!
Love the colours!
Have a great weekend.

The blue against the peach sky is breathtaking. I might have to use those colors... somehow...

Incredible shots, David! For those of us who aren't really that far from the Yukon, you are impressing upon us the beauty that awaits if we would just make the journey. :D

i just love the crispness and the contrast between the mountains and the sky in that first one. what a view, indeed.

Glorious!
The Blue Hour is special all around the world, and these mountains sure are tops. ;-)

this is why sky watch works so well, same planet and sky but oh so many different aspects.

Being a suburban slicker myself, I am just happy to be able to look out over the hills from our kitchen and the room that I blog from. You are lucky to be there. I always enjoyed the mountain sunsets when I was in Utah and Colorado.

Your photographs are marvelous, as always, but it was your narrative that raised the goosebumps! Thanks for taking me there with you.

How perfectly...perfect! I can not believe how a simple camera (well maybe not quite as simple as the brownie) can capture such a sight and hold the colors so true...or is it the photographer? I have something for you at my place, do come by when you have the time.
Sandi

Absolutely gorgeous, David! Those colors are amazing. I've never seen a sky that shade nor hills those colors. Gold on blue, makes me think of God's Jeweler's tray. :)

Still Smiling!...as I head off to dream of a golden satin pillow on top of royal blue sheets.

I love the colors in those shots. I also love the way you described the experience.

David wow what a beautiful skies, interesting color contrast. Looks like you have fun....Anna :)

It's beautiful! Amazing the colors of the sunset!

Wow what stunning photos. The colour of the sky is amazing

Those are just gorgeous pictures! Stunning!

So this is the Yukon? The place we've heard about being so cold your nose could just snap right off? LOL!

Funny .. I imagined it as an icy wasteland with the milk being sold in slices. But I'm English, we don't do cold like you do. ;)

Yes, beautiful skies! Drop by if you got a chance in my BEAUTIFUL here.

My beautiful bride photo is posted for this week. Happy Saturday to you. Stop by my blog if you have time....

The colors in the photo are stunning. Great shot!

I did Photo Hunt today, too. Please visit and leave your link! http://newyorktraveler.net/photo-hunters-beautiful/

The spruce branches give it all scale and perspective. And that blue is pure magic.

Absolutely gorgeous! I was recently on Sandia Peak in New Mexico at sunset and stood in awe at the wonders and as I snapped away at the beauty before me. Your last photo is very similar to one I took! I stopped as I was walking away and saw what became one of my favorite photos. Here's the link if you care to look:

I'm so glad you are enjoying the beauty and sharing it with us!