Never Be Afraid To Experiment With A Camera 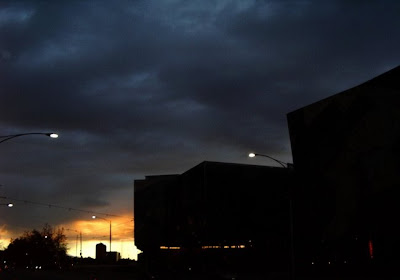 More than three years ago, I was testing out a little Pentax Optio LF33, a very handy four-megapixel camera. At the time, I was strictly committed to using film and I had a brand-new Canon EOS 3000. But looking back on it now, it was the humble little Pentax that opened my eyes to the many benefits of using digital cameras.

I woke up long before dawn on a Saturday morning and drove into the city, because I wanted to check out how the camera performed in very low light. I had already earmarked several locations around the city, from where I would be able to shoot the first light of the day - literally. As I drove down the freeway, I was delighted to see that the weather forecast was accurate and that there was a lot of cloud.

I shot the city skyline in the dark, without using a tripod. Then I got back in the car and drove to a nearby bridge. From there I photographed the scudding black clouds across the sky - and their reflection in the surface of the Yarra River.

Then I shot scenes around the city, finally ending up on Flinders Street. I took a few shots of the station, with its distinctive dome, then I turned around and saw the first real splash of orange in the sky, low on the horizon.

Here was the dilemma. I was about a minute's sprint from my car. Even if I ran to the car and drove a couple of blocks, the light would have changed swiftly. So I bit the bullet and decided to take the shot, even though I wasn't in the best spot. The frame I shot is the one I've published with this post - and apart from the glow in the sky, you can see the distinctive shape of Federation Square.

It's not often I take a shot with almost half the frame in darkness - but I reckon it worked in this case.

Wow! That sky is dark and brooding.

This post made me pull out my digital to see if it was similar to mine. I too have a Pentax. Mine is an Optio M30 7.1 mp 3x zoom which I love. I have not been able to find another like it. I found a similiar one on sale at Wolf camera but did not have a need for one. I take most of my shots without flash. I guess I am not a flashy person. LOL Love the shot by the way. I mentioned you again in my Sky Watch and you might find Nancie's post interesting...

I love the fact that you don't have to think of the economics when you take photographs. If it doesn't work, move on. In our old film days, we used to spend quite a bit getting some very dud photos developed.

My daughter has a very nice Pentax Optio E30 and we had a very nice Pentax film camera before that. Very nice lenses in those cameras. Our Olympus S500UZ is very dissapointing in anything other than good light. Nasty camera shake, which we have not worked out how to counter without a tripod.

Have a nice weekend David.

I reckon it did. Nice shot!

That first flash of orange on the clouds is very different from what I'm used to. It isn't all spread across things. I guess it happened soon enough tough. Nice picture.

Greetings from Texas, Enjoyed your blog and great shots. Thank you for the anniversary wishes.
Smiles, Celestina
la rea rose

I absolutely refused to use digital for the longest time. My husband had a point-and-shoot, and we got some of the BEST pictures from that. I finally caved. Now it's an addiction. And YOUR picture was wonderful! I love the light.

That really is a stunning shot! The daub of colour is quite magical!

It certainly worked. As a dedicated film user for years, it takes a change in mindset to realise that you take the shot regardless. That said, I still take fewer pics than someone without a film background might take.

That is a wonderful photo, David :)

I love the night's skyline. In fact, you know me....I look forward to SPH and your expertise in photography.

Mine's posted. Stop by if you can. You can see a dark sinister creature. [kidding of course] Have a super weekend.

My PH in here : my dark adventure Thanks

Isn't it amazing how shots just happen and with your talent....they are just simply stunning....Hope you are having a good August.

Thanks for visiting my blog! What a beautiful picture!

You always have such interesting shots, David.

One thing I love about the digital camera is the flexibility with the image. I often take photo's of insects, sometimes from a distance. Sometimes the subject of the photo is not up to par (too far away, out of focus, etc.) but when I check around the rest of the photo I often find great little treats. Things I didn't see when I was taking the photo because I was concentrating on the subject.

Good choice for the theme.

The magic of this photo is the splash of orange peeking through the buildings....beautiful!!!

It definitely works for dark. A good choice that would have worked for last weeks theme as well.

I love how you can play with words as well as with the camera! lol

You betcha it worked! That is a great shot. I experiment loads but don't always get these fantastic results! And I am a sworn digital convert now. I really would miss the versatility I have with the digital.
I discover new things all the time.

Lovely shot!
I totally agree - it is important and fun to experiment with the camera.

Interesting story and a great shot for this week's theme. I was hesitant at first to go digital and now wish I did sooner.