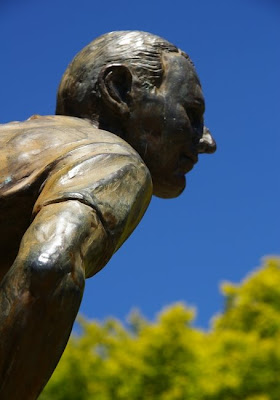 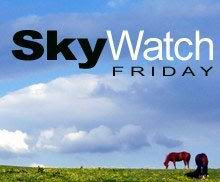 Under the vast, blue Australian sky, there stands a statue of a unique athlete. My post for today’s Sky Watch Friday honours a man who came from dairy-farming stock. The ashes of Edwin Flack lie buried in Berwick Cemetery, in semi-rural Victoria, and not far from his final resting place is a beautiful bronze statue cast in his likeness.
Several weeks ago, before winter stripped the leaves from our trees, I decided I would drive out to Berwick and find the statue. It wasn’t just because I was a sports journalist in my twenties, fortunate enough to travel the world and report from sports venues that I had dreamed about as a child. It wasn’t just because Flack was a humble, unassuming hero. It wasn’t just because Berwick is in my home state.
It was because I wanted to write a Sky Watch Friday post that was slightly, well, different. With the opening ceremony of the Beijing Olympic Games just a few hours away as I write this (and possibly under way as you read it) I thought this would be the most appropriate moment to share the story of a simple, down-to-earth nineteenth-century Olympic hero. 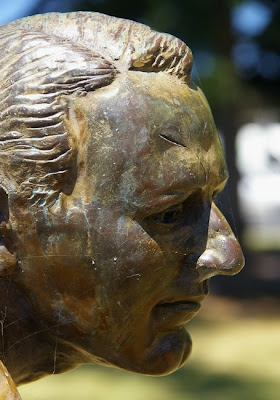 I drove down the main street of Berwick and reverse-parked in the very first spot I found, near the historic Berwick Inn. Apparently, not everyone knows of Flack or his heroics. The first person I asked must surely have been a tourist, not a local, because he just shrugged and confessed he did not know about the statue.

As it turned out, it wasn’t far away from where I stood. I’m notorious for not being able to spot things when they are within arm’s reach (is it just a "man thing"?) but a few seconds later, I spotted a statue in the park that neatly bisects the busy dual carriageway to and from Melbourne.

Edwin Flack was Australia’s only representative in the first modern Olympics, the 1896 Athens Games. He was also our first Olympic champion.

How he got there is an unusual story. He was based in London at the time, working as a junior accountant at Price, Waterhouse and Company. He took a month’s leave, left without any fanfare (there was no Australian Olympic Committee in those days) and paid for a sea passage to Athens.

He won the 800 metres and the 1500 metres and even competed in the tennis - with a borrowed racquet. Interestingly enough, he even ran in the marathon and led the race until he was passed by the eventual winner, Spiridon Louis. Historian and former editor Harry Gordon points out that Britain’s Union Jack was unfurled for both of Flack’s victories at Athens and the British anthem was played - because his Olympic nomination papers had been signed by the London Athletic Club.

The English-born Flack was feted by European royalty after the Games and earned the nickname The Lion of Athens. It is said he could not go anywhere in the Greek city without being followed by people who continuously chanted his name.

And so, more than 110 years later, I stand before his statue. It shows a man with chiseled features, simple footwear and socks that concertina around his ankles. I photograph the statue from several angles, against trees that were probably not even planted when he was a boy.

Much later, I discover that he was a keen photographer as well. Surely he would have approved of the angles I explored with my camera. 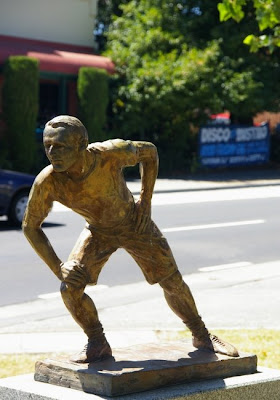 For other participants in Dot’s concept, go to Sky Watch HQ.
Posted by david mcmahon at 5:30 AM

Fascinating story. Is the statue really bronze or is it gold that has tarnished?

He would not win anything in those shoes, today.

This was a time when the participants of the Olympic games were truly amateurs.

What a nose! LOL
Love it!

Several Olympics ago there was a made for TV movie about the 1896 Olympics. Although it was mainly about the American team and its struggle to get to Athens, I do remember a bit about Flack being included as well. We recorded the show, and the kids had all but worn it out when I packed it away so that we might have a chance to see it again in the future. After all, they had it memorized. It might make a good Christmas present for that one daughter of mine this year--if I can find where I hid it.

A very fascinating story and your shot are always great:9

Such an interesting post I almost forgot to look at the sky! His statue has held up very well. The patina is beautiful!

Have a wonderful weekend of beautiful skies!

Very interesting story and great photos! The sky is beautiful in the background.

What an amazing story. I find it interesting that he was also a photographer. It is amazing the photos I have seen since I started blogging. Truly amazing talent!

The sky there is so blue. Very nice.

Such an interesting story David - didn't know anything about him!!!!

This is really a heartwarming story. I liked it immensely. You are to be commended on remembering a great but humble man.

Thank you for sharing this. It is the high point of my day.

Thoroughly enjoyed your post and the photos... indeed a hero.
Mountain Retreat

Quite a fascinating post, David. Thanks for making the trip to Berwick.

Terrific post. The pictures are great, but the story is what makes it wonderful. (Can I nominate it for Post of the Day? I'm just kidding, but in a serious way.)

That sky is just beautiful!

Very nice post! I enjoyed all the different views of the statue.

And my husband and I were just wondering about this...the seasons in Australia. Are your winter days lengthened as ours are shortened? Of course they must be. IT's hard to get my mind around it really. I'm so rooted in Canada anymore.

What a fascinating history! My favourite shot is the one of his shoe.

That is a great walk down history. It made me think of things I learned while watching Chariots of Fire. It was a time frame when sport was sport and honor meant everything.

And missing things easily seen in arms reach....it is not jsut a man thing. I do it all the time. It drives me crazy as I laugh at myself.

Striking photo! Unique for SkyWatch. Very interesting story, too.......I especially appreciate that this Olympian was from dairy-farming stock!! Winter where you are.....I must get my head around that.

Great story of this man, also your photos David.

My mother would love that blue blue sky!

Perfect timing for SWF and the Olympics!

My SWF photos are posted in these blogs:
Jenn Was Here and Shutter Happy Moments.

Please drop by if you have some time. Thanks.

Nice photo for the SWF. Fantastic post on the olympic statue. I guess most of us would glue to the TV to watch the games. Have a nice weekend. I love the table tennis and swimming. Look out for Singapore team in table tennis. :)

Nice story, David, and so apropos for the opening of the Olympics. I have a thing for bronze. Love it.

Beautiful and so appropriate for today's opening of the Olympics!
Bon weekend,
M.

In an hour and 15mins we'll mark the start of another Olympic event. May Australia be awarded with lots of medals :)
Have a good weekend Dav!!!

thank you for sharing the sory of a great but little known athlete...

Good angles and a superb post, David! Thanks for the inspirational story. Let the games begin!

so apropros love this