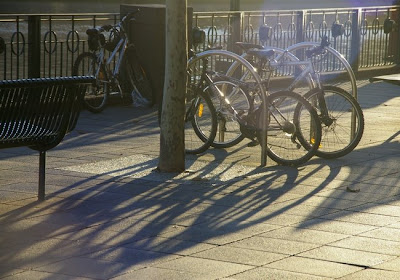 We’re almost into the last fortnight of winter here and just when we thought maybe - just maybe - the weather was losing its bite, the chill came back to remind us that Jack Frost isn’t quite ready to surrender.
Last Friday was a mellow evening and while the temperature was still in the single-digit range, there was no wind at all and the sunshine made for a mild end to the day. But just in case we in the southern states of Australia thought we could close the door on winter, it returned with a vengeance about 24 hours later, with sleet, snow and biting winds.
But the official start of spring is on September 1st and already the sun is rising earlier and setting later and the shadows are changing too. I shot this early in the morning as I walked across Southbank, just to show you the quality of the light, as well as the elongated shadows.
I could have shot it from a slightly different angle, to avoid the flare in the top right-hand corner of the frame. But by taking the shot while looking diagonally into the sun, it means you see the light exactly as I did. And in case you’re wondering, yes, it was a cold morning.
Posted by david mcmahon at 5:30 AM

Mary Isabella and Kiley too! said...

I have been reading and enjoying your thoughts and writings immensely. Your get to the heart of the subject at hand in such a brilliant manner. ....Mary

So---who's calendar is the "correct" one? Ours, "up-here", with the birds-n'-blooms on them in August? Tell me, what pictures are on YOUR calendars this time of year?

Or maybe you prefer the "generic" type, with NO pictures at all?

I love the colours of winter here in Australia. At least it is not so miserably dark for so long. Last night we had a chocolate brown sunset. Beautiful.

This reminds me of a time I saw an exercise bike locked up to a rack in downtown Toronto. Made me LAUGH! Wish I'd had my camera!

It looks chilly and nippy! I wonder if I would think so if I hadn't read the accompanying text first. I think so; there are no visual clues to suggest warmth and the quality of the light looks chill.

Lovely shadows. I like the way the light looks golden.

I have a photo challenge for you --

Preface: my current Wordless Wednesday post was pure luck, I know that. I have a decently framed photo by chance. It is slightly blurred and it is only by chance that it is not ALL blurred -- I do understand my limitations, and I am not comparing myself to the master, but this is a feat I would like to see accomplished well ... capture a butterfly in flight.

I know that if you've not already done this successfully and can't pull such a photo from your archives, I may have to wait for a bit for the weather -- and the butterflies -- to cooperate. I'm patient. Mostly.

Lovely image, David! It reminds me of sunset shadows where I live. I remember cold walks too. Thanks! :)

I'm glad you're headed into Spring! Do Australians have a First Day of Spring celebration?

I love this picture! And we are thinking maybe--just maybe--the weather here is losing its bite as well (but turning cooler). :)

crikey! lve been away a week and lvemissed so much, you are so prolific in your photography and so diverse.
I keep seeing you mentione din blogs, you have quite the reputation....deservedly so....

its good to be back..

Great pics! haven't seen you in a while. stop by I've got some pretty interesting posts up.

This shot makes me want to hop on my bike and ride down a shady lane through a wooded area...we have had temps in the low 70's today but the burn of summer is set to return tomorrow...fall isn't far away, and I can't say as how I'm sad to see summer end.
Sandi

I'm sure you've heard this before... but I think it is SO fascinating that our seasons are opposite. As I am in the mids of the "dog days of summer" and longing for autumn... winter is drawing to an end and spring is around the corner.

This is depressing - to me! You're looking forward to spring and we're heading into fall. Although it's a beautiful season, that means winter isn't far behind! Blah! lol

(And you can have as much of our summer heat as you like...)

The long shadows seem to make this photo really interesting.
We are having rain, rain & more rain! No summer at all.

It looks so peaceful!

I love the shadow. I tried to get a few shadow shots, I think they are very cool. It might be sa eiser to take the shadow photo. Have you ever gotten one in the dark ....I didnt have much luck.