A Frond In Need Is A Frond Indeed

Cleopatra Would Have Been A Big Fan 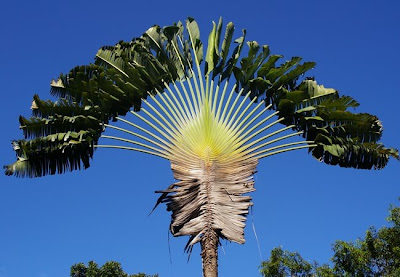 This post is dedicated to a (very) young man in Britain who is possibly my youngest reader. John (for obvious reasons, I won't identify him) asked his mother to contact me when I wrote the post Palm Reader, because he wanted to know if I had shot any other images in that sequence.

Yes, I did, and here they are at John's request, along with the story of why and how I actually shot them. We were on holiday on the Malaysian island of Langkawi at the time, and I was still blogging because I had my laptop with me. The weather was fairly stormy on the morning we flew in and while we explored the beautiful 40-acre property of the resort, I happened to spot this banana tree towering above me.

It took me a few seconds to work out what sort of tree it was, before I spotted the distinctive leaves, which are traditionally used in some parts of rural India as a substitute for plates. I figured it was a banana tree, but I'd never actually seen one where the branches fanned out in such perfect order, rather than growing at random angles.
It made an interesting silhouette against the dark, cloudy sky and I shot just one frame before walking on. The next morning, the weather had cleared, so of course I had to shoot the same scene and this time the bright green of the giant leaves worked beautifully against the clear blue sky. As I hit the trigger on this shot, I thought it looked like a giant Roman fan, of the sort that palace serfs would have held above Cleopatra to protect her from the elements.
But there was clearly a better angle to be had, so I explored the options with the shot below, which was the next one in the sequence. It was only then that I realised the most unusual angle, along with the geometrical precision of the fronds, would be best served if I composed a tighter frame - and you can see the best result here. 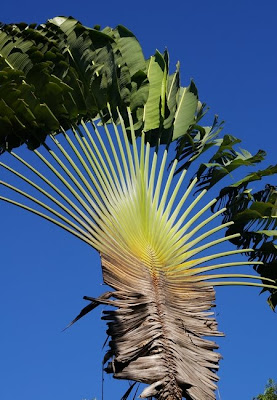 My botanist says this is not a banana tree, but is a Traveler's Palm Tree and it is a native of Madagascar.

Interestingly, the Traveler's Palm (Ravenala madagascariensis) is not a palm. Nor is it a banana (though it once was included in the banana family). Instead, it's a close relative of the bird-of-paradise flower (Strelitzia reginae) and is placed with it in the family Strelitziaceae. Dinkum. Would I come the raw prawn with you?

Unusual perspectives! Almost like symbols of ideas and illusions! Fascinating!

Whatever type of tree it is, it is very photogenic! I like your first shot.

Hi, my friend these are beautiful work David.

I'm a big fan of this tree too. Have never seen it before, but this is just beautiful! Thank you for sharing this with us:) Wonderful photos!

I do like that tight shot the best. It's amazing to me how many different shots come from one item.

I love that last shot. With fronds like this... ;)

A Cuban In London said...

The photos are fantastic, David, as usual. Could I add another use we make of banana leaves in Cuba? Because our work experience takes place in the countryside (or at least used to when I was in school, back in the day) you resort to banana leaves to wipe your bottom when your natural urges catch you red-handed and far away from a toilet. Obviously, we use the greener leaves as they are softer and kinder to the skin, but still, watching your beautiful photos and thinking of some of the uses people put them to around the world brought a smile to my face today.

What a beautiful symmetrical shape! Excellent shots - really glad you went back to get it against the blue. The tight shots work really well, but I am glad to see the "big picture" too. I know some one is going to come in from football and go ape... ;0)

I immediately thought it looked like a fan too. I love the second picture!

No matter a travelers palm (we have them here, too) or a banana tree, it's still lovely and hopefully tarantula free!!!
Sandi

Some nice shots there David, excellent for SWF!

I come from a family full of punsters. I've lived with some of the best. I'm not too shabby myself. You, however, are the king.

VERY neat. I find myself wanting to know EVEN more about them. This is frondtastic David.

Beautiful shot! What an interesting tree!

I am sure Cleopatra would like that! =) At first mom thought this was a different kind of banana. It had an interesting look, right?

My PSF is HERE.

Beautiful indeed, I wish I were Cleopatra, I could use a fan in South.Oz in the summertime. Where did you find the fan palms?

Wow. Who knew your readers knew so much about trees that aren't palms? Amazing! Looked like banana leaves to me. :)

Either way, it is gorgeous! I've never seen anything quite like it! Great shots. :)

I'm sure John will enjoy this very much!

Excellent pictures, writing and a great bit of blogging David... I'm sure John will be so pleased at this..

great shot and story - as usual!

Oh this is too cool shot i like it. The way you capture of the sky is great..Nice work.

David: What a beautiful show that tree makes in the sky. I've never seen anything like it before.

"I thought it looked like a giant Roman fan, of the sort that palace serfs would have held above Cleopatra to protect her from the elements."

Of course---you are so right.
Now after reading your description and looking at your photo, I also imagine the same thing.

Ok now these puns are getting out of hand! I mean i am the puntastic but you are palming off now to pun B class.

Seriously veery good of you to respond to an inquiry with these beautiful images. Isn't it just so much nicer to be postive than negative. I'm sure your young reader will be delighted with these.

One of the things I love about blogging is that it can be both entertaining and educational. Here in New England our treEs are so very different so I found this post very interesting. These are exotic looking trees - and I love the incredibly blue sky. No doubt your young frond, John, will very much appreciate these pictures. Enjoy the day.

typed in by his own fair hand! - Mum.

I've seen banana trees(growing up in Florida), but nothing quite like this.

That is the most magnificent thing I have ever seen. It is gorgeous. Very well captured against a stunning sky!

David,
Here's to John for taking the initiative and for recognizing a great teacher when he found you on your blog!

Unusually to see them so perfectly formed. Lovely, whatever they are.

well thanks to John :-)
It looks pretty good and a great subject for photos.
I like the really blue sky in the background.

i remember the previous shots of this plant and these are equally interesting... i should remember to take several shots at different angles and focal lengths when i come across an interesting subject.

Amazing. I wouldn't know anything about palms - I was just impressed by the unique fanning.

The tree is totally wild! At first I thought it was a fan, then I realized that it was an odd tree. Very pretty though.

I can see why you would be so 'frond' of these pictures David! I looked at them and immediately thought of those ornate headdresses that the showgirls and Caribana dancers wear.