Just Turn The Rules Upside Down 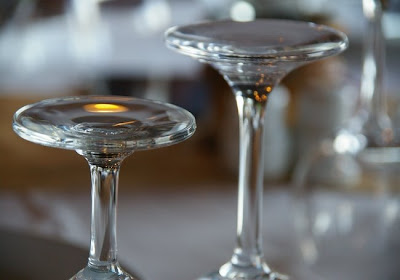 One of the golden rules of photography is to look beyond the obvious. Occasionally you find a gem of an image where you least expect it.

No one can tell you what to photograph or how to frame your shot. There is a switch in your brain that clicks and tells you to lift your camera to your eye, while the extension of the same process tells you how to compose the shot.

We were at a terrific seafood restaurant recently and I had my camera bag by my side. To tell the truth, my family were studying the menu while I chose not to open mine, simply relishing the view instead. The restaurant was fitted out in the manner of a sailing vessel and there was no shortage of arresting sights.

But as dusk began to creep silently across the horizon, I suddenly noticed that the soft interior lights embedded in the heavy wooden ceiling beams were forming exquisite but subtle patterns in the upturned base and stems of our glasses.

I could see the waiter approaching our table, so I had to pick up my camera quickly. The race was on. I simply had to capture the sight before she turned the glasses the right way up. I won - but only just.
Posted by david mcmahon at 5:30 AM

I actually have a glass eye that I bought at an antique fair. It sounds strange, but it actually very interesting.

This post really made me giggle. I can "see" your playfulness. :) does your family ever get annoyed with your camera always present? My hubby hates it if I try to take pics in very public places.

David....I love this post and photo. I learned early-on in my teaching career that if you remember to view the world as a child, it's a richer, more more beautiful place. You proved that upside-down glasses are truly more interesting than viewing them right-side up! Thank you for reminding me!!

The next time I set my table....you guessed it!

what a lovely pair of glasses.

i love this golden rule of photography; i think it should extend to life.

Your family was studying the menu while you chose not to open yours? You really are a photographer, aren't you? :)

Beauty is everywhere, especially when we stop our normal routine & focus. Glad you had your camera with you. I am an amature photographer & I can't wait to look around your site. I am sure you have some more interesting pics.

You have a fabulous eye for images. The other day I was out in Austin, Texas....saw some strangely colored cupcakes and had the thought, "David McMahon would have loved to photograph these!"

Nice close up shot. You always have a sharp eye for beautiful objects for photography. Brilliant.

David: Thanks for the lesson and a beautiful shot for certain.

This is where you are a true artist. When I'm in this situation, I'm getting rid of the glasses as fast as I can because we don't use them, and they take up too much space. I should be relishing the view!

i like that golden rule; i think the golden rule of photography should apply to life in general also. photographers are artists like poets and painters, and so you all see thru eyes of uniqueness--seeing what others don't always see.