C Is For Chinatown 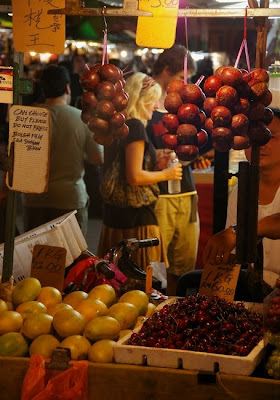 On our way back from Langkawi last month, we spent a few days in Kuala Lumpur and the concierge at our hotel told us that we simply had to check out Chinatown. He added that the best time to go was late evening, saying that the place really came to life after dark.

He wasn’t kidding. Petaling Street is a gateway to a realm of many enriching experiences. Apart from commerce, there is the novelty of cheek-by-jowl shops, the glistening array of goods for sale, the zeal of the shopkeepers and the unmistakable feeling that this is a place where no one sleeps.

I watched a couple of vendors pushing heavy trolleys around the crowded street. Intrigued, I stood oblivious to all else as one of them, a woman, opened up a strong conical plastic bag and poured ice into it. Then she opened a can of Coke and poured the contents into the bag. Next she inserted a straw into the bag and tied the top neatly together. Then she took the payment from one of the stall holders and handed over the made-to-order iced drink. 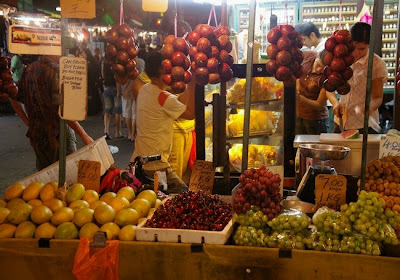 A few metres down the street, I asked this vendor if I could take some photographs of him and he nodded. He seemed to be keeping up a reasonable stream of commerce in the crowded precinct. But because of the angle from which I was shooting (and the throng around me) I didn’t think it strange that he was positioned on the corner of an alleyway.

Much later that night, as we left the area, I realised that his ``stall’’ was nothing more than an old motorcycle. Obviously, he loaded up all his equipment, rode in like one of the heroes in an old Western, plied his trade and then rode home again at the end of the night.

Hopefully his theme song was that film classic, "For A Few Dollars More". 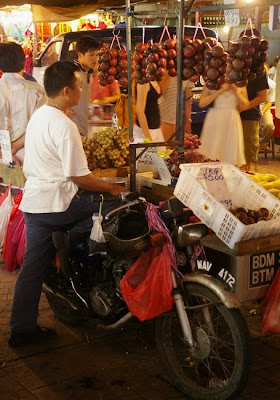 For the home of ABC Wednesday, go to Mrs Nesbitt's Place.
Posted by david mcmahon at 5:30 AM

Beautiful fruit vendor pix. And strange way to get a Coke "to go"!

Hi David, thanks for your comments :-) I love these pics, particularly the top one - the close cropping seems to raise the energy of the photo, I can almost smell the goods on display there. x

hey DAvid- I will give you a call on thursday... I have just got my father out of hospital...

I was transported right beside you

I used to spend a lot of time in China and people get all sorts of things onto motor cycles. I once saw someone riding along with a whole pig balanced across the seat.

Uh, oh. We have the same theme for our ABC Wednesday, but yours is better than mine. :-)

I've never been to China, but those pictures of the fruit vendors were gorgeous!

I love the story to go along with these pics. It really makes me feel like I am there.
I always wanted to go to a market like that in some exotic land. I will someday. :)

I miss this, the hustle and bustle and all the colours. Thanks for this!

A market like that just BEGS to be photographed, does it not!

It's always good to see my home country from a foreigner's perspective. Happy WW! :)

what a wonderful journey, thanks for taking us along. My goodness, I am aching to travel.

Amazing that those folks can get so much on one "bike"...while it takes us(at least in the US) a freaking SUV to pick up a bag of goods.

this really isn't a million miles away from how i sell my software...
except i'm normally on a moped. motorbikes can be so cumbersome. . .

The ingenuity of people selling their wares never ceases to amaze me!

A fantastic market David. How much was the motorbike? LOL!

Thanks soooooo much...Now I have the "C is for Cookie" song reambling around in my brain and I can't shake it loose.
Lovely photos and commentary. Would love to see it in person.

Chinatowns all over the UK are wonderful places and definitely something that I miss here.

Are those pomegranates hanging there, David? One of those in an "ice bag" would be more up to my speed!

Great pictures and such interesting commentary!

Ohhhhh, David these photos remind me of my early childhood walking along the streets of Stanley Market in Hong Kong, before it became a concrete kingdom.....(sniff)