The "Charge" Of The Flight Brigade

Yes, You Could Call It A Power Struggle 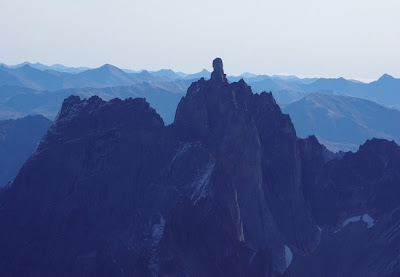 Until a couple of years ago, I’d used quite a few camera brands. Then in mid-2006 I used a Pentax for the first time when I had to review the performance of a K100D. I liked the camera so much that I bought it. I liked the way it handled, I liked its balance, I liked the feel of the camera, I liked the weather-proofing of the body. But more than anything else, I liked the fact that it was powered by simple AA batteries.
For more than a decade, I had become accustomed to sealed battery units, but with the Pentax and its 18-125mm lens, I suddenly realised there was much greater freedom. It’s the perfect lens if you’re travelling. And it’s the perfect power source - crucially - if you’re on the road. Hey, have you ever come across a place, even a remote town, where you can’t buy AA batteries?
In the two years that I’ve had the Pentax, I’ve always used rechargeable batteries, but I’ve always carried backup with me. In my camera bag, I always have one set of AA batteries. A few months ago, I made assurance doubly sure and slipped in a second set.
It was a simple decision that saved me from what could have potentially been my greatest embarrassment. Last month, I was privileged to be invited by Yukon Tourism aboard a Fireweed chopper flight over the snowy peaks of Tombstone Territorial Park. It was my second day in the Yukon and because I was using a Pentax K200D along with the K100D, I had charged both sets of rechargeable batteries overnight. 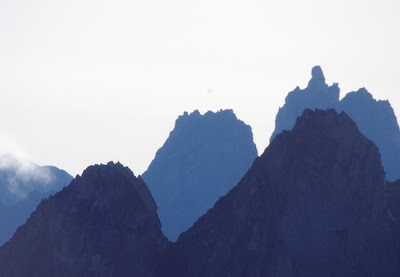 The chopper had barely taken off and I started shooting immediately. We took off from Dawson City and had been flying for about ten minutes when the battery indicator on the K100D showed I had no power. I was puzzled, but I knew I had backup in my bag.
Mate, if you’re six foot three, never try this in the cockpit of a helicopter. I emptied the battery compartment and, scrabbling around by feel only, found four spare AA cells in my camera bag. Praying that I wouldn’t drop one (or more) I put the fresh batteries into the camera. No worries at all.
About ten minutes later, the same thing happened on my other camera, which had my 70-300mm lens on it. Again I had to repeat the process in the cramped confines of the left-hand seat. 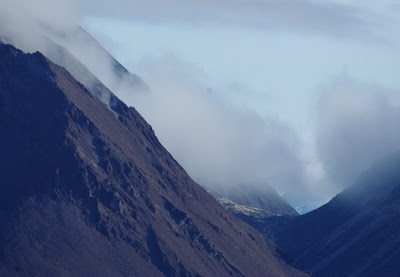 Yes, I had two sets of spare rechargeable batteries, but they were in my hotel room. Now I had to work out why my batteries had died so quickly and unexpectedly. The answer slowly dawned on me. I was using a 240-volt Australian charger - in Canada, where the voltage is significantly lower.
Immediately after the flight, during which I shot almost 1000 frames, I headed into Dawson and bought a set of lithium batteries and a Canadian-voltage charger. From that point on, I had no worries.
Certainly, my decisions to a) buy Pentax and b) always carry two sets of spare Energisers in my camera bag had paid rich dividends. 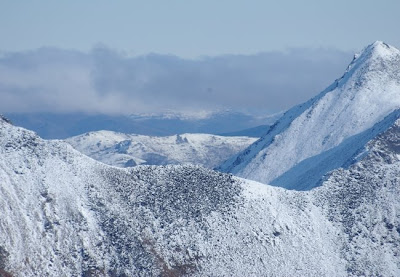 The photographs you took are really very nice ones.

wow, all that would have been missed otherwise!

Thank Goodness that you had the spares then. I love the blue hues of these pictures.

One of the things I want to do is to go back to Hawaii and take the helicopter tour of the island. Haven't checked that one off the list yet. Now I want to do it in the Yukon, too! Of course, thanks to you I'm traveling everywhere...

Your photos are grand, as usual, and your commentary captivating; you're a wonderful story teller. What gets me, though, time after time after time, is your clever post titles and internal header (or whatever it's called in blogging)! Sometimes I groan; other times I just sit in amazement! This was one of the "amazement" times.

Fabulous pictures. Must have been a thrilling ride... in addition to the thrill of trying to keep the batteries from falling out the side of the helicopter!

As for voltage, I nearly caught my hair on fire in Denmark when I was using a converter with my low volt hair dryer. Excitement comes in unexpected places while traveling.

This IS rich. What WE would have missed had you not had the ability to use those batteries (and for some reason thought to bring two sets!)

Tombstone Territorial Park..wow!
David, you know how much I admire mountain photographs and this is no exception. The last picture is my favourite. Thank you for sharing.

Nice to read about your back up plans with the AA batteries.

Incredible shots, per usual. I had a similar problem when in Italy - my camera died when I'd only taken a few photos in Pompei and I knew I'd charged the battery overnight. But what happened was that the battery overheated and stopped the camera from working. From then on I charged the battery and took it out as soon as the green light went on. Then I was fine. But next time I go to Europe, I'll purchase a European charger.

Breathtaking images. So glad you carried the spares.

Thank goodness for the spares.

Having spare batteries, no matter what the brand of camera, is always good insurance. With all my Canons I have amassed a fair amount of spare batteries and I'm always overweight with batteries - but often saved!

I'm so amazed at you David...you remind me so much of our older son who will also do nearly anything for the Photo...like you he's been in coptors, small planes balloons and once even got to steer the Fugi blimp he was taken up in for a photo shoot of Greenwood, SC for the paper he worked for. Mac made a deal with him that none of these "adventures" would be shared till they were over...did you want to be Indiana Jones as a young man, too? Great photos as usual...

You have such talent, I am glad so many people view your site!

Great views, great advice. I have three batteries for my little Casio and two for my Kodak--but they are each proprietary and must be charged in their own special chargers. In fact, the Kodak has to sit on the dock with the batteries in it. That's crazy, isn't it? Of course, I charge up both before a major outing with that camera, but I can't have one set charging while the other is in the camera.

look at those snow peaks! That is beautiful.
Thought you might maybe be interested in this....my Pippin-girl is intruiged with cameras and is currently taking a class at school that uses only 35mm manuals. She is using my husband's old Minolta XG-M. Even though the teacher demanded a film loading manual camera she has no idea how to work this Minolta...so hubby is teaching the basics

And this is interesting too....my dad just brought my girl his old Petri FT-II with all of the filters and everything to play around with. She is so excited. She can't wait to load up a few rolls and play around.

Just thought it might make you smile. Have a blessed day.

Rich dividends indeed -- that I thank you for sharing some with us today. Those sure are some majorly breathtakingly beautiful views there! :)

Good thing you managed to take such lovely pictures.

The shots are just superb. It's just as well you had the batteries

Yes, my Sonys use AA. D'Star's Sony has a new fangled rechargeable flatty so she must buy a reserve but nothing over the counter.
The scrabbling was well worth it for the results.

I have run out of superlatives, the pictures themselves are a treat and the text is the icing on the cake.

Still don't know if you ever sleep.

It would not have mattered to me which camera I had, batteries or not- I never would have been able to make myself get in that helicopter. But, those views are breathtaking, not to mention capable of creating motion sickness.

My view is here

I'm glad that with your worry about not even finding batteries in some places, that you were able to find the charger. Gorgeous shots as always!

These are incredible, David! What remarkable shots - I think you truly captured the majesty of these scenes!

I finally woke up and posted, so I hope you'll stop by:
http://flamingofotos.blogspot.com

Those are magnificent views and an interesting post. I hope you have a great weekend.

Wow...amazing photos as usual David!
It must have been excitement and adventure in one trip with the helicopter!

These are the most beautiful shots I've seen yet from your trip to the Yukon, David! Absolutely fantastic!

I've been there with the camera battery thing although I've not changed them in a plane. Yep, running out of power can definitely ruin a photo opportunity. I carry a set of rechargeable batteries because they last longer than the store bought ones.

Gorgeous views of the rugged Yukon peaks. What a blessing you were prepared with eXtra battery power. (former Boy Scout)? ThanX for the tip!

What incredible views! I'm so glad you had those spare batteries!

Gorgeous photos David and the Yukon is going to be an endless source of photos for you for a long time to come. Have a good weekend.

So the lessons to learn are a) buy a camera that uses AA batteries and b) carry all sorts of spares when traveling! I will take this to heart as I am preparing for my first ever cruise in Nov. to Central and South America.