Herd It On The Grapevine 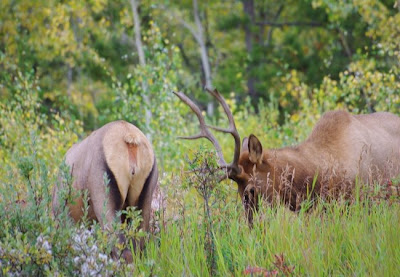 Sometimes you just get plain lucky. Late on Monday, as we drove from Haines Junction to Whitehorse, I was shooting through the window of the fast-moving 4WD, as I had done right through the trip. We were more than halfway through the journey when I spotted an oval-shaped lake.

There was very little breeze, so the surface of the water was absolutely calm, reflecting the beautiful yellow and green tones of the fall colours. We turned around and headed back up the highway so I could take some shots of the reflections - and while I did so, we could hear the high-pitched sound of what I thought was a herd of caribou.

But Margaret Goodwin, of Yukon Tourism, pointed out that it was actually the sound of elk. In the stillness of the evening, the sound was clear and dramatic. It drew me like a magnet.

Sure enough, less than a quarter of a mile up the highway, up a grassy knoll, was the herd. I got some shots of the animals closest to me, when we noticed the antlers belonging to a stag. 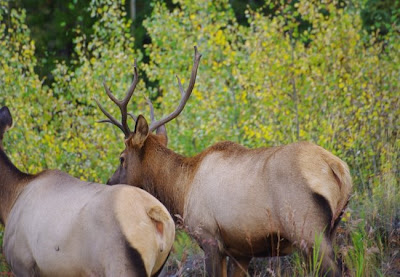 So there I am, pointing my lens at this magnificent beast, but what I really want, more than anything else, is for him to look directly at me. Antler shots are great, but there's nothing better than actually having a stag looking directly into your lens.

When in doubt, improvise. So I relied on the age-old theory that if you don't know an Aussie bloke's name, you call him Bruce.

"Psssst, Bruce," I called out (not too loudly, though) as I tried to attract the attention of the stag. 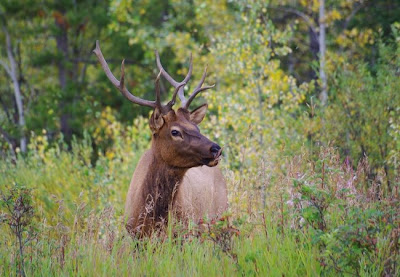 If Crocodile Dundee could hypnotise a water buffalo, maybe (just maybe) I could get this fella to look straight at me.

"Oi, Bruce," I tried again, speaking in a low, measured tone that I hoped would carry clearly. "Look this way."

So he did. And I hit the shutter as quick as I could, before he turned majestically away. 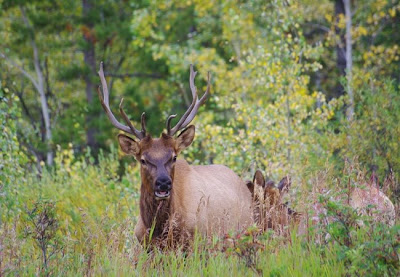 I have to say, though, my best animal photo from this week was a priceless shot of a Charging Grizzly. Do check it out and tell me whether you agree wth a very funny comment from Sharon Ishika, a brilliant doctor who has been a close friend of mine since we were about seven years old.

She checked out the shot I took of the grizzly on the charge and had a short but succinct message for me. This is what she said: "That is exactly what I told my mother when she insisted you were a "nice boy" -- he's stupid! Forty years down the line you prove me right. Forget the attempts at being smart like working out the camera details."

Posted by david mcmahon at 5:00 AM

Well I guess this one's called Bruce! That is a great shot. Glad he turned around.

As for your mate and her mother - they're BOTH right. Stupid just about covers it with regard to facing charging grizzlies!
But that doesn't mean you're not a nice boy! You seem to cover all bases, as they say.

Nothing like the sight of a elk in the Fall, with a full set of beautiful antlers and a thick neck trumpeting his readiness to mate.

I have only seen it once in the Rockies but have never forgotten. No camera at the time, but it is still in my mind.

All my grizzlies have been seen from afar thank goodness. They, and all bears, are to be treated with great care as there are often bear attacks, at least three deaths in the past year in Canada and many injuries.

My son hikes often here in the areas surrounding Vancouver and they always carry bells and bear spray. So far the bears have not been near enough to bother them. But we never, never forget how dangerous they are.

What a magnificent beast Bruce is!!! though do i detect a snarl on his mouth whilst giving you the evil eye?

Move over Dundee and Irwin, David Elk is in the house!

I wonder if my brother knows you named an elk after him...?

When I lived in Northern Idaho I had one of these fellas put his feet on my front steps and look in the picture window. I was baking bread that day and apparently the scent called him in along with all the other neighbors.

I have made mental notes. If in doubt assume that an Elk's name is Bruce.

You stand less chance of being attacked by an elk! The grizzly was plain foolish! However, I guess you can be nice and foolish!

well, as a member of a clan of hunters i will tell you that they do the same thing when they are trying to get a shot. granted they are shooting with a gun rather than a camera but yep, they call them with a pssst.

So Elk respond to psst and Bruce. I'm learning more about wilderness fun than I ever did backpacking with my folks. Great shots!

Your shot of the stag is really beautiful. The one of the grizzly - just proves you are crazy, as your friend said.

some great photos!! i went and looked at your grizzly post... good lord......... i wont let my husband see it, because he's as crazy as you and would probably had done the same stunt!! haha!

Look at the rack on Bruce! So majestic! That first picture sooo looks like one elk is going to get an antler up his arse. hehe

I still can't believe you got that charging bear shot.

A magnificent creature. I'm surprised he answers to the name of Bruce.

uxqThat is one serious looking elk - truly majestic. I wouldn't mess with Bruce. Their behinds have interesting markings also. You are so fortunate to have had these experiences.

Great shots of the elk!
That comment made me laugh! I think your crazy and always after THE shot, but not stupid!

How I love your little narratives accompanying the pics! They are always so much fun! And great pics too!

Great Pictures. I've only ever seen Elks in a wild life park great

You never fail to amaze me David.
Another great shot! So glad you enjoyed your trip to our northern region.

Just wanted to tell you how disappointed I was when I finished your book. It wasn't long enough!! Waaaaaa! I always want to stay in a book I am enjoying like I did Vegemite Vindaloo. I hate when they end. It's so hard to take your mind out of that story and make it focus on another then.

I did think that a story about Azam would be next in line.....hint hint!

Brilliant shots of Bruce! Imagine him doing your bidding! lol

That's beautiful Elk. Never seen one in person yet!

It looks like Bruce the Elk is a bit annoyed with the paparazzi in the bottom photo. And the charging Grizzly photo? Three words come to mind... ARE YOU INSANE? Great shots but good grief... stay safe out there!

Great photo! Thanks for sharing.

Oh my gosh David... These are absolutely fantastic!!! We'll just call you authorblog-dundee from now on, eh?