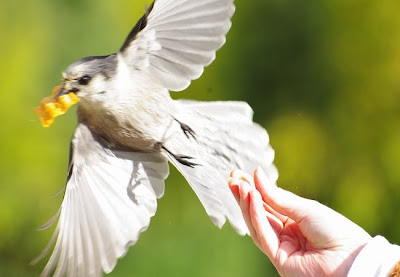 On my first full day in the Yukon, I was photographing the Tintina Trench from a great vantage point when I noticed a bird perched on a signpost. Margaret Goodwin of Yukon Tourism told me it was a Canada Jay and was also referred to as a whiskey jack.

She told me just how tame the birds are - and knowing my fondness for any photographic challenge, she told me to try and hit my shutter button as the bird reacted to a potato crisp held in her hand. 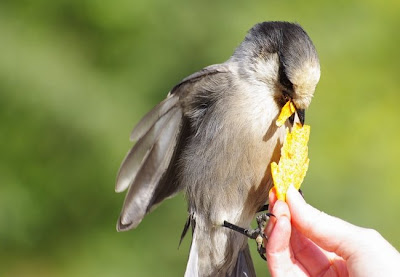 I was not entirely convinced. "You’re going to hold a crisp and that bird’s going to come and get it?" I asked. She nodded. The challenge was on.

She held up the crisp and the jay, categorised as Perisoreus Canadensis, swooped immediately. I was a fraction of a second too late on the shutter - but as you’ll see from the first shot above, I got the bird as it turned towards me, with wings outspread and the prize in its claws.

Still marvelling at how tame the bird was, I asked Margaret to hold up another crisp. Same thing. Bird swooped. My second shot was a carbon copy of the first attempt, so I didn't bother to post it here. 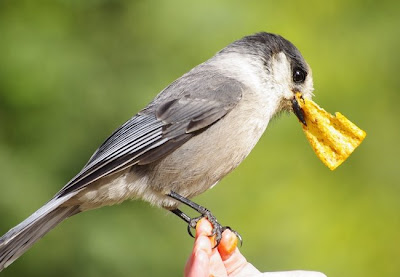 Then it got really interesting. Margaret suggested I hold a crisp in one hand and try and photograph the bird at the same time. Feeling a bit like Edward Scissorhands, I held the crisp in my left hand and the camera in my right.

I just made one mistake. You see, I held the crisp loosely between thumb and forefinger, so the bird was away with the crisp in its beak even before I had reacted.

Naturally, I had to try again. This time I held the crisp more firmly, in order to delay the whiskey jack for a split second, while I tried to get a shot of him. 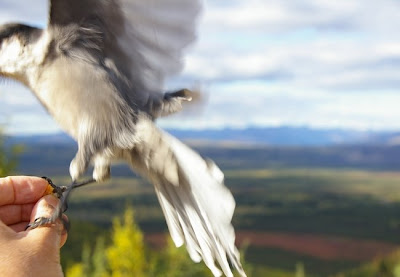 Amazing shots, David, and really cute and brazen little bird!
There is nothing quite like the challenge of wildlife, or semi wildlife photography, is there - and it's totally addictive. I decided this morning that I want to be a wildlife photographer when I grow up... :-)

David: A wonderful story and great photos from your Yukon trip, realy nice.

These are absolutely great shots. A little birdies are very friendly, as they might tame.

What an incredible experience to have. And you did a great job (as per usual) photographing the bird.

How totally cool, David, to have a bird come and sit upon your fingers for even a split second! For not having the speed of sound reflexes of wild animals, we totally forgive you! I would gladly have sat there all day and fed every bird in the valley just for the sheer joy! :)

What a post! I always say pictures can tell a story in 4D, and this one did, the audacity of the bird, the hope of the person, the scepticism in that first moment, the manipulation by both of both, amazing stuff David, thankyou.

that is most amazing. i've fed a wild gull from my hand but the only other time i saw wild song birds eat from someone's hand was with my grandfather. he'd sit like a statue with birdseed in his open palms and they'd come to him alone. no one else i knew could do it. those canada jays are amazingly tame.

What a challenge - and you obviously love challenges! Great photos - I can't even imagine trying to get that shot. When I took the pics of the snapping turtle a few weeks back I had to ask him to please slow down so I could get a decent shot! ;)

This is amazing that you could do all this at the same time.

Very exciting!
What fun to have a wild creature trust you enough to get that close!

That was the most amazing photo you have ever done! I recently tried to take photos of squirrels & they move so fast. Birds are faster still. You did very well.

I really like these, David, and I especially enjoyed reading the story that went with it.

A whiskey jack, huh? I suppose it's not the same, but my husband likes whiskey called Jack - Jack Daniel's, that is.

Interesting little birds. As unafraid of humans as they seem to be, they might be a bit pesky if they got to your chip before you could put it in your mouth! :) Wonderful photos.

very artistic and talented as well....my....the things I can learn from the professional!(hold the crisp tighter, grip the camera, etc....!) haha

Ahh that's wonderful. Tamer than any birds around here.

Amazing. Awesome. And lots of other words / phrases beginning with A! (Ab fab, astonishing, etc.)

Seriously - I never cease to wonder at the way you are able to adapt to an opportunity and the way nature accommodates and obliges - not only you but others, including myself. I am glad I am not the only one quick enough. And I am glad that the jay wanted the crisp so badly, that it held on. ;0)

What a wonderful thrill! The photos and the experience. What a charmed life you live.

Three letters are all I've got..
W
O
W

Oh my gosh David! This is spectacular! Absolutely AWESOME! I would flip for an opportunity such as that. As I already said...
W
O
W

OC said I should tell you that those crisps are aMAIZEing and you are a bit corny for thinking them potato.

Incredible photo, David. I enjoyed this post tremendously. I am here with an invitation.


Announcing...The fifth launch of BlogBlast For Peace ~ November 6, 2008.
In a few short weeks bloggers from across the blogosphere, from all different points of view and beliefs, will unite as one and blog for peace. Two years later we are still going strong with over 38 countries participating and 1100 posts from bloggers just like you - saying the same thing on the same day. If you've never participated in this event, consider this your personal invitation from me to you. It is a wonderful day in the blogosphere.

Click How To Get Your Peace Globe for more informaiton.

We will speak with one voice. One subject. One day.
All it takes is one post.

Cool camera critters! I had a blue jay looking bird take a sugar packet from right in front of me once on an outdoor cafe balcony. Scared me to death when it swooped out of nowhere.

Wow that last shot is fantastic even thought he's trying to escape your lens! I'm not sure chips are good for birds though? Are they tame beacause they're fearless or because they're used to being fed?

Wonderful shots of this bird.

As hungry as I am right now, I'd take a chip from a stranger's hand, too!...and get my picture taken doing it! I want to see a pic of the beautiful scenery in the background of that last picture!

Wow, David! What an experience I would like to do something similar some day.:)

how totally cool! love these pictures!

Absolutely Amazing David. And the view behind the Jay is breathtaking!

I love birds. And my first time seeing a whisky jack. Great shots!

wow, those were amazing! great shots!

Hi David! What a great experience and pictures. Wow. Lisa

Funny that you didn't think the jay would take the crisp--his cousin the gray jay, common at Mt. Rainier, once stole an entire strip of bacon from me.

WOW what a crazy bird! I would have never guessed that a wild bird could be so tempted!