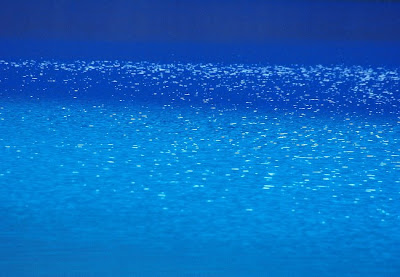 I was privileged to share in many great experiences during my week in the Yukon, but a helicopter ride over Tombstone Territorial Park was the highlight of my time in Dawson City. Like everything else during my time here, this exceptional experience was organised by Yukon Tourism.

Our pilot was Brent from Fireweed, the well-known chopper company - and did he ever give us an experience to remember. You can see other photographs of the mountains, taken from the cockpit of the helicopter during that flight, on my post titled Climb Every Mountain. But I'd like to share these photographs as well.

It was Brent's first day flying out of Dawson City, but shortly after we took off, he mentioned that he'd heard the other pilots talk about an amazing blue lake among the mountains. Let me tell you, they weren't kidding. 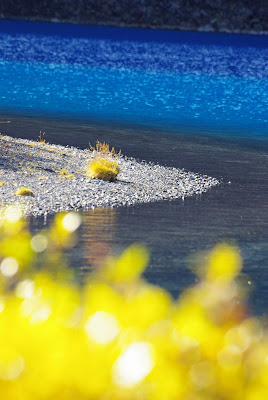 I shot the first three images with my 300mm lens, to give you an idea of the unique colour. It was almost like looking at a coral reef, because the blue was so striking.

I took the first shot to capture the gentle ripples across the surface of the lake, while the second shot (below) is an interesting contrast between the deep blue of the water and the soft yellow-green colour of the surrounds.

Then I realised that despite the gentle breeze causing the surface of the water to pucker, there was a very interesting reflection to be seen. Take a look at the picture below and tell me if you can figure out the object that is reflected in the water. 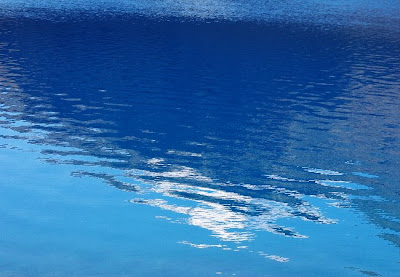 Is it a bird? Is it a plane? Is it Superman, perhaps? Put on your thinking cap, because I've given you a couple of clues already.

However, if you're ready to give up and you want the answer, here it is. I shot this final frame with my 18-125 mm lens. 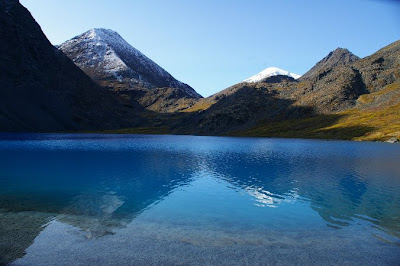 Brilliant colors! I like that your photographs seem to have an emphasis on color compositions. It doesn't even matter what the subject is.

Now that is absolutely stunning! What colours!

God, those are some great looking photos David. The pure beauty of God's vision.

OMG that is just stunning!

I wonder if the color and clarity of the lake has to do with a lack of pollution in the air and water ... in any case it is exquisitely beautiful ...

Oh wow. Love the abstract quality of the blue and yellow shot. The final photo blown up would be stunning.

gorgeous! did they explain why the water there is so strikingly blue compared to other lakes?

Anonymous said...
This comment has been removed by the author.
4:08 AM

There is a lake similar to this in Oregon we visited last summer-Crater Lake. The blue of the water is so beautiful and like nothing I had ever seen before.

Beautiful... I've enjoyed reading and seeing all your resent posts David... and I know that I will be back here for more of your excellent pictures, wise words, great advise and terrible poems... ha!.. only joking my friend.

Mummy sez the bluest warter she sor waz wen she waz in Ostraylia, arownd Wilson's Prom. She sed she cud see the sand, an littol fishes.

Wun time she fownd a rok pool wiv littol fishes in it. She stuk her finger in and they swum up an kist it.

Literally.
(And THAT is an accomplishment sir!)

Truly exquisite. Is the white image reflected in the water the snow cap of the middle range?

Just amazing. I remember watching Dawn rise in the Himalayas having trekked for several days and risen at 4am to trek in the dark for this final treat. As the sun rose it hit the sides of seven mountains one after the other pulling them out of the mist and lining them up like sentries. It occurred to me as I watched with awe that this simply happens every day. You just have to be there to see it.

WOW ~ what a gorgeous, unspoiled, crystal blue lake. What a blessing to eXperience this beauty firsthand.

Oh the joy of these pics...such clarity.. I wish l could take pics like this..l am thinking my new digital camera isnt up to the job or your standards... it only has one 'macro 'setting, (closeup) that's it...more macros? sigh...I think so..

I'm not so sure I would have believed those colours to be real if I'd have seen them elsewhere. Amazing!

Wow! Those are amazing. You had a definite treasure being able to see that lake.

I'm wondering if that lake is rich in a particular type of mineral that gives it that "Electric blue" color?

Thanks for taking us along to Canada. I needed a vacation. It is a beautiful country and you captured it admirably.

Absolutely stunning, David! Did you ever figure out why it was so clear and not at all murky? Bet it has something to do with the altitude and temperatures. Exquisite! Thank you!

What an incredible scene. Blue is my favorite color, especially the blues of water.

Beautiful colors. I was wondering what word or words would describe that blue. It is like nothing I have seen. I also like the contrast with the yellow of the plants. I am glad that you have pictures to share - people might never have believed how blue the water was without the pictures.

That is INCREDIBLE. What a place. I love them all. The last one even shows the stones under the water near the shore. Incredible.

Reminds me of Lake Taupo in New Zealand, except that seemed to be silver. According to the fish finder on the boat I was on, the water was SO clear I could still see the bottom past 20' deep. Just amazing. In comparison to things like these, the southern Mississippi River's a total skank whore. :(

What lovelyness! No other word for it.

David: Wonderful colors and great reflection on that wonderful water.

The water is gorgeous. Beautiful. That's on my to-see list now.

WOW WOW WOW that is so beautiful. lovely photos as well. thanks for sharing.

I already live in a beautiful area of Northern Canada, but I feel a sudden yearning to go further North. Stunning!

Wow what a gorgeous place. That blue is just perfect. It's amazing what sights there are out there isn't it?

Beautiful! I don't think I've ever seen a lake SO blue! the reflection of the mountain peak is very cool!

Those colours are amazing.. beautiful stuff.