You Giving Me The Bird? 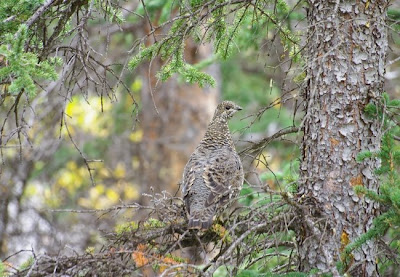 So here's the deal. You're walking up a slippery hillside path at Kluane National Park. Snowy mountains dominate the skyscape and Lake Kathleen shimmers below you, almost as far as the eye can see. You've got not one but two cameras around your neck and as you climb, they seem to get incrementally heavier.
You're concentrating on putting one foot in front of the other, as efficiently as possible. If you slip, you're going to end up on your butt. There are tree roots. There are rocks. There is lichen. There are rivulets. There are mountain streams. Not dangerous, in any manner of speaking. But seriously embarrassing if you lose your balance.
So you get the idea? I have my eyes firmly focused downwards. That's when Brent Liddle, our guide, asks if we've seen the ptarmigan.
Ptarmigan? Mate, what ptarmigan? I can't see anything that looks remotely like a ptarmigan.
That's when he points up into a tree several metres in front of us. So now it's confession time. A city slicker like me would not have seen the bird, even if I'd been looking into the branches. It's all about natural camouflage. See how the bird blends into its surroundings and the tree bark in the first shot? 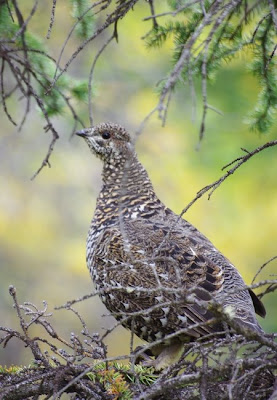 And precisely because of that, I try and creep forward, in order to get a better composition. The bird's one thing, but hey, I want to get him framed against the yellow and soft green of the fall colours. So one step at a time, I inch forward, making up ground while arcing round to the right a bit, to get the colours I want.
Mister Ptarmigan is watching me, but he ain't afraid. He ain't skeered at all. He's just a-sitting there, swivelling comfortably on his branch and making sure I show him some respect. 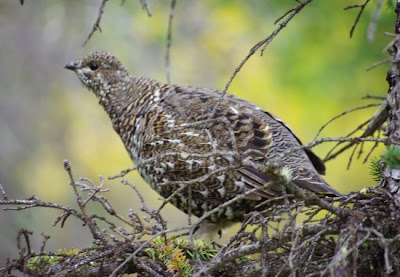 Even when his body language changes, he's in no hurry to take his leave. He leans forward, as if he's about to take flight - and I have the Sigma 300mm lens ready, if he takes wing. But he just sits there, as if he's testing me.
If I thought that was the only wildlife I'd see during the hike, I was mistaken. A few hours later, I had the opportunity of a lifetime. How many photographers get the chance to shoot an image of a Charging Grizzly?
Check out the rules at Camera Critters or go to Misty Dawn.
Posted by david mcmahon at 3:00 AM

David, so impressed with your site, I have been inspired. See my Monday post featuring you as "a site to see!"

I have to laugh, I'm imagining you using one hand to tell the nice birdie "look at the silly human"! He seems to be quite comfortable posing for the camera tho doesn't he?
Sounds as though you really had fun on this trip, David!
Sandi

I wouldn't have noticed him either! Glad he decided to stick around & pose for you.

They are just masters of camouflage! Wonderful shots David.

You made me do that lip and tongue sucking noise that sounds like their beating wings as I read...I love doing that! Weird huh!

He was definitely watching you.
Never heard of that particular bird, but he takes a good picture to be sure.
Great photos.

Ptarmigans are browner in Scotland.

Don't what that bird is,but I love the way you told the story.And he/she is a neat looking bird.

You know I have to admit I didn't even see it at first. :(

But then when I looked again, I could not believe it!

What a wonderful bird! Great camouflage and great shots. Well spotted. Well, by your guide anyway!

And you still advertise your madness re the grizzly? Mad mad mad.

That's amazing camouflage. I've always wanted to see one during the winter when their feathers turn all white. Are you up for the challenge? :)

Great minds must think alike. My Sunday post is featuring you as a site to visit like Avt coach.

Love that subtle plumage. Just going to have a look at your brush with the grizzly....

Hi,
my name is Anh and for my BA-Thesis I’m currently conducting a study about American Bloggers.

I would like to invite you to participate in the survey.

It will only take about 15 minutes and it’s completely anonymous.
Just visit the following URL:
http://onlineforschung.org/usblogger

Even if you don’t want to participate (or are not American), you can help me by posting the link in your blog and/or inviting others to take part.

I greatly appreciate every survey completed ;)

David, you always have the most amazing photos. Thanks for sharing.

David: What a great story to go along with the post. Do you know they turn white in the winter to match the snow?

It took me a while to focus in on the bird in the first picture. I can see why they would be invisible. Isn't nature something!

Ptarmigans are brownbut when it snows that turn white. Neat camouglage trick. Wll you know I'm a dab hand at the one handed bird shot, so I can relate to your mad antics. Just start getting worried if they start answering you back. Great tale.

A Blog In The Rough said...

I thouht you were going to say you saw the bird and then tripped and fell, but I'm glad you didn't!

We saw a ptarmigan recently at Mt. Rainier. I have finally learned to recognize one, but like you, seeing one is the problem. On one occasion in our first season of meadow roving (patrolling the trails offering route advice and local information to visitors) we were lunching at Shadow Lake when a party of birders came by. "Have you seen any white tailed ptarmigan?" These novice rovers were clueless. I wonder if we had looked right past some.

Another name for ptarmigan is "fool bird". That is because the bird is so foolish that if you approach it slowly and obliquely enough (don't look at it) you can get practically within throttling distance before they bolt.

I have a great recipe for ptarmigan breast cooked in wild rice and morel mushrooms, if you're interested.

I love this sweet photograph- a favorite bird for me anyhow..thanks sandy

So you were shown the bird, huh! Neat capture! I like it!
Have a great weekend!
Cheers, Klaus

I envy you both the shots and the Sigma 300!