Actually, Jack's Road Is A Highway Like No Other 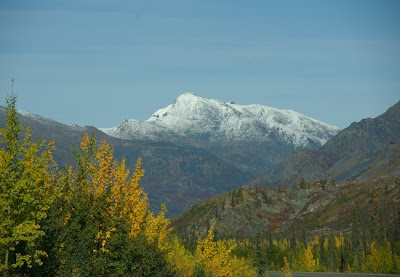 There’s only one public-access road in the western hemisphere that takes you across the Arctic Circle. Ladies and gentlemen, welcome to the Dempster Highway, which connects Dawson City in the Yukon to Inuvik in the Northwest Territories. 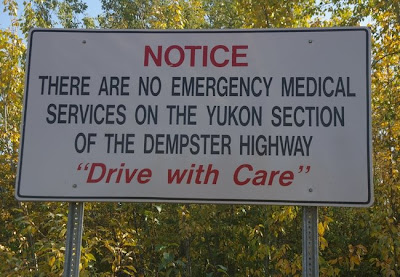 Let me remind you of one harsh reality. If you’re driving a rental vehicle, you’ll probably pay a hefty premium to drive it here - if the rental company allows it at all.

The Dempster, named after a Mountie called Jack Dempster, is a highway like no other. It is basically a thick gravel strip that is from 1.2 metres to 2.4 metres deep, sitting atop the permafrost beneath. And when the locals tell you it can be tough on tyres, let me tell you, mate, they’re not over-stating the issue. 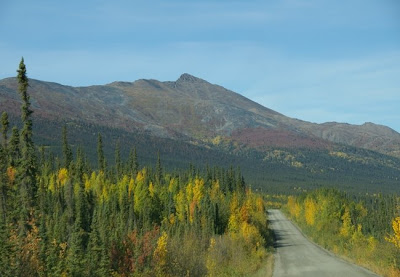 But if you’re a photographer, this is Paradise Road. And here’s another thing - you keep hitting the trigger at every new sight, but on your way back to Dawson City, it’s almost like driving another, different stretch of highway. The same views, seen from a diametrically opposite point of the compass, look so very - and inexplicably - distinct from those you shot earlier. 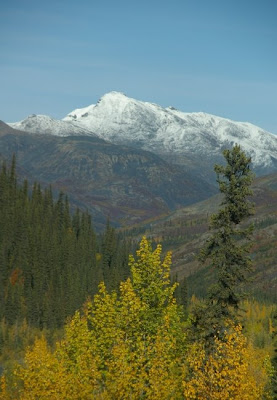 When we drove the Dempster on 29 August, the weather was brilliant. Blue sky. Clear views. White mountain peaks. Lakes. Valleys. Every bend in the highway opened up a new vista as we drive towards the tundra-like flatland.

The vivid reds had not yet taken hold across the sweeping landscape, but here and there we could see isolated little pockets of rich burgundy. The fall colours were predominantly dark green and a vivid yellow that took on a special quality, glistening in the late-afternoon sunshine. There was early snow, too, even though the calendars had not yet turned over to September. 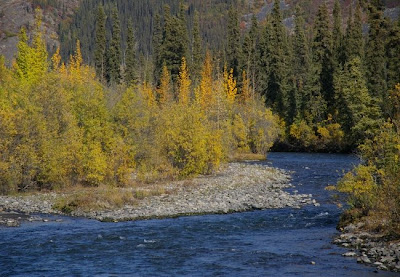 At Grizzly Creek (above) the clear, cool water was graced with shimmering sunlight reflected on its dappled surface. At a couple of the stops we made, the over-riding silence was a hymn of praise to Nature, but here at the creek, we witnessed the full cloak of autumnal beauty. The rushing water presented a glistening blue that perfectly complemented the mountains and foliage. 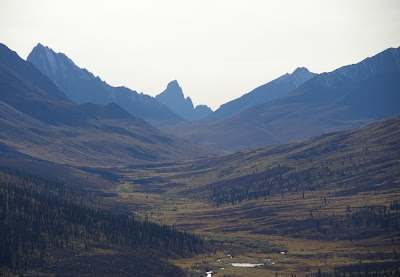 At one lookout point we were able to look straight down the barrel of a valley to the majestic sight of Tombstone (above) in the distance. Earlier that morning I had taken several hundred photos of Tombstone and surrounding peaks during a helicopter ride; now I was able to shoot the same distinctive monolith from ground level. 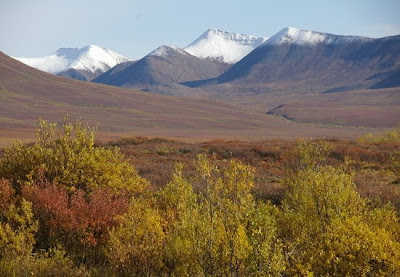 Here I walked down the hillside to capture some glimpses of the vivid foliage. Brought up to have a deep and abiding respect for my surroundings, I chose my path carefully down the slope, trying not to trample what grew wild, abundantly and so arrestingly. No matter that the hardy undergrowth would have sprung back. You tread carefully in a brick-and-concrete structure, so you do the same in the wild. 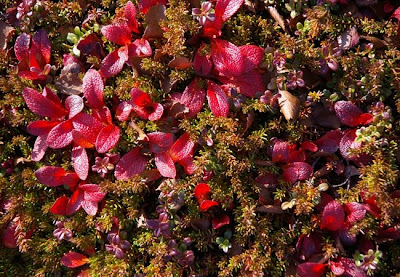 At Two Moose Lake, where we eventually turned around, again I marvelled deeply at the silence. Surely a view like this should have had the best work of the classical composers playing softly but distinctively in the background.

Something called The Tombstone Two-Step, perhaps. That would be appropriate when you are in the embrace of the mountains. Especially here on Jack's road. 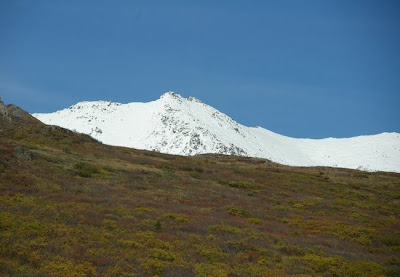 Visit TNChick, the creator of Photo Hunt.
Posted by david mcmahon at 11:00 AM

How beautiful! It reminds of me of the roads I drove on in France and believe me, it made me a bit nervous! LOL!

Oh, Man - thanks for taking us on this trip. My tires are no worse for the wear, but my senses are renewed. What a memorable experience!!

hi david..am back to your blog after a long long time....snd its been my loss ..seeing the wonderful posts...
great pics...i like the mountains anytime..and i like road trips.....this is wonderful combo of both!!

Wonderful post, David; breathtaking photos. Do the Yukon Tourist folks realize how much interest you're stirring up for this part of the world? I'll bet they're counting on it! Ahhh! but were I 50 years younger!

This is out of this world. Wish we could have seen a slide show!

It's so beautiful. Realy have enjoyed going on this adventure with you.

I love remote driving. Did you pass any other cars? Beautiful shots.

These pictures are really amazing. You must have been in Heaven taking these!

What an amazing place. I like your description of the silence. I would love to experience that. Thank you so much for sharing this one. I think Yukon Tourism got their money's worth out of your trip!

Very lovely. Thanks for sharing, as I vow never to go there.

This is what I love about blogging - the education I receive and the people I meet. I didn't even know such a road across the Artic Circle existed. I am curious as to how long a road it is ~ I loved the picture where you were looking straight through the valley at Tombstone. Once again, thanks for sharing parts of this adventure with us.

I am in awe of your photographs. Even more, that this is a place on earth very few get to see and you are so willing to share them with me! I can hear the silence and then the start of that music you were talking about. I bet that you did not want to leave! Thank you for recording this experience for me to add another vision to my soul! A true gift! Really!

Great shots David of God's own country. I can see you were slightly impressed by the beauty of it all. Did you have to keep stopping every 100 yards to photograph this or that?

David...These are some of the most beautiful photographs I've ever seen. The variation of color in each scene is amazing. I had never heard of this marvelous place. Scarey if you're in an accident!!

That must be one amazing road to actually be on. It would take a spirited person to make the journey. The warning sign at the beginning of this sequence seemed to me to be quite a refined bit of understatement!

These are beautiful, David. The light is subtle--just wonderful!

It's been a dream of mine to drive the Dempster Highway and cross the Arctic Circle. Lucky you to have been able to do it and capture such striking natural beauty! I am green with envy. ;D

Wow David. I'm impressed. What a beautiful series of pictures. I'm glad you braved the rough road to bring us a glimpse of this wild area. Pappy

David, that 6th photo down, is something else....what a photo!

Such lovely scenery, if it is a bit dodgy getting about! I think the views are worth the danger so I dare say you certainly found them so! Our skies in South Carolina are just that brilliant a blue...must be something to do with atmosphere. If you'll come take a tour of our lovely state, I promise I'll dig up a bear for you to shoot...with a camera only of course! We all know my views on hunting.
Sandi

You never let us down...wonderful pictures. Thanks for sharing, again and again.

Amazing images, David! Absolutely gorgeous. My favorites are the view down in to the valley and the bright red leaves. Thanks for sharing these.

Thanks for the ‘tour’ … these photos are breathtakingly beautiful! I’ve shared at Sacred Ruminations this week.
Hugs and blessings,

What breath taking scenery! Thank you for the virutal tour!

In a world where we are infiltrated by noise around every corner, I would venture to say the silence of this areas was amazing to take in.

Thanks for the tour.

wow stunning photo's excellent post!
view mine if you wish here thanks...

Wonderful scenery! What a place!

Sorry I'm late but glad I didn't miss this. My goodness - I bet you struggled to know which ones to post! They are each and every one of them awesome! Brilliant shots and thank you so much for sharing this with us.

David: Wonderful photo as you went on Jack. I'll resist saying I din't know jack about Jack. Oh no I won't.

Breath-takingly beautiful! Thanks for taking us less fortunate along with you on your trip to the Yukon and Northern Territories!

What beautiful scenery, even if it is a long way from medical connections!

Too beautiful for words.. I won't even try.

Wow...how beautiful. Thanks for sharing!

so much beauty...and you have captured it oh so well in pics. love it! i want to go. oh, and i love your last name...it's my maiden name! ha!

I always love stopping by to see where the road takes you.
Although published late, I posted a South Dakota road