(With Apologies To Andy Warhol) 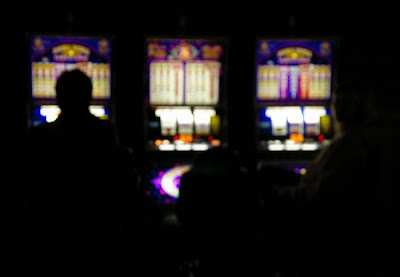 There’s a great Australian expression that might not be in common use around the world, but it sums up this photograph rather aptly. The expression is simply the abbreviation "NQR" - which denotes the phrase "not quite right".

Sometimes, though, an image that doesn’t quite live up to expectations produces an entirely different effect - and I reckon this shot falls into that category.

As some of you might remember, I was in Dawson City three weeks ago, at the invitation of Yukon Tourism. After watching the evening’s entertainment at Diamond Tooth Gertie’s, I published an interesting series of the dancers at Diamond Jubilation and this image was shot the same night.

I had already been told that while cameras were allowed at Gertie’s, video footage was not permitted during the show. Nonetheless, when I walked into the place, I double-checked at the front counter and was given the thumbs-up. Because I prefer to shoot without a flash, I had to work the options to try and get the best results.

Having worked with two cameras right through my week in the Yukon, that evening I left the Pentax K200D with the 300mm lens in my hotel room and opted for my Pentax K100D with the 18-125 Sigma lens. The lighting in Gertie’s is interesting - low enough to be unobtrusive yet not bright enough to shoot long range with ease if you choose not to use a flash.

I watched people using the slot machines along the wall that faces the side street and the colours and shapes caught my eye. There was the immediate compulsion to take a shot that showed the players in silhouette, almost like shadow puppets, with the richly textured background comprising bright colours and the arches above each machine.

I only shot one frame, because the cabaret was about to begin, but I wish I’d taken two or three more shots. In retrospect, I’d like to know what you think. Should I have focused directly on the machines, leaving the players out of focus? If you have the time to leave a comment, let me know what you think.

And for all those who are wondering, I’m not a gambling man. I wouldn’t know which direction a horse race is run, and I would be more at home using an automated train ticket machine than a slot machine. Besides, photography is far more fun.

And even if an experimental shot like this is NQR, there’s only one solution. I’ll have to travel thousands of kilometers back to Dawson City with my cameras, to get the shot right next time. Would I do that? Yup, I’d be delighted to. 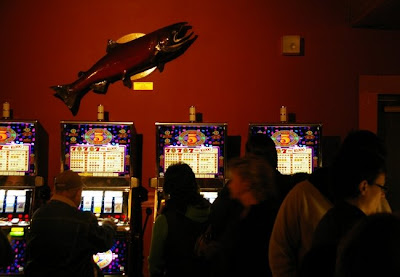 I think focusing on the machines is best personally. I'm surprised you could take a camera into a casino. I worked in one for awhile and you could not have them on the gaming floor.

Judy and her sister went right in and began playing the machines while Ron and I had one more up the street.

When we arrived we were greeted by a big guy saying you'll have to buy a ticket! When we found out the cost, we waited outside.

Finally, Ron asked to go in and find his wife...he told them we would be back at the bar since we weren't paying to get in the place!

Apparently the cover charge is for the shows going on up on the stage. We don't gamble and we promised not to watch the show, but they still wouldn't let us in!

I liked the bar better anyway!

There is a certain charm in both focused and blurred versions.

And in my world, NQR means "not quilt related".

I am not sure what to make of either of these, and as you know, I am no expert! This is just what my eye tells me...

The first shot is NQR in every way for me. Not enough sharpness anywhere but that maybe how you want it. I like the silhouette and lack of light, just not the lack of definition.
The bottom one is too busy and bright for me. Much prefer the silhouette.

Nothing for it mate. Back to Yukon you go!

I'm not a photographer, but I like the first shot. It's ethereal and mysterious all wrapped into one...even if it's really NQR. I'm usually not, either!

I am not a photographer and singularly unqualified to comment, but the thing I loved most about the bottom picture was the big fish, very funny and unexpected. Sorry not to be more help! MH

Obviously your choice will depend on what you want to say. I would have gone for the first image, pulling in tight on the bright colours and shapes of the machines. The people as silhouettes would look good - the anonymous nature of gambling and all that.I'd have held my breath to steady the shot and hoped for the best.
The second picture was more of an establishing shot to me. The fish was an interesting diversion, but not really the main event.

"Gamble's Soup" ~ well, that got me right off! LOL

Second, I'm not a gambler either! In fact, when a bunch of us "girls" went to the casino last October to celebrate my birthday, I had to make sure at least a couple of them had been before and knew what to do. So off we went and I had a lesson sitting right at the slot machine. Well, I might as well have torn up my $ and flushed it down the toilet. I'd never do that again.

Finally, your photo - well, to me it does seem rather NQR, but who am I to say? I'm no expert. But I do sort of like the machines blurry with the silhouettes sharp, but there's not enough sharp and separate silhouettes to make it right somehow...to me, that is. So I think you need to go back to the Yukon and get it right! lol

I think the shot works - maybe some PS adjusting, but excellent subject! Were you in "stealth" camera mode in a casino???

I like the NQR shot. Only when I read the commentary did I know what it was. When I first saw it, I thought it was stained glass in a church. Obviously on closer inspection, it is not, but I think it was kind of fitting. The slots ARE a church to some. Not judging here; everyone needs their own "religion" if you will. But being too uptight to gamble myself, I'm with you on that one. I've never pulled the handle of a slot machine. I tried to play roulette once with $20. I lost $8 and quit because I couldn't handle it!

Both are very interesting. I like the shot of the fish in the second one.

I'm wishing you could have got a clear shot with silhouettes on the first one. The bottles are particularly interesting.

The casino, I think a nice tight shot on the machine with a loose silhouette of a person playing might be fun.

I like focusing on the machines with the people out of focus. It gives a frantic or busy feeling.

I love how that first photo came out, its blurriness imo underscores the ambiguity of a place like this. You may have noticed that I definitely have a love affair with blurry shots anyway, they can give an image that certain edge. Wouldn't you agree?

I love that you posted a blurry shot. Makes half of the shots in my iPhoto library seem worthwhile somehow :-) Can you imagine the participation in a weekly NQR photo theme? We'd crash the servers, people! And as much as I like your NQR shot, I think that what you're really searching for is an excuse and permission to return to Dawson City. So go back, and get a QR shot. K?

Well I like the shot except that it does make my eyes do funny things! Too bad you hadn't take one more shot with the machines in focus.... ya know so you could see the differences.