I Is For Ilium 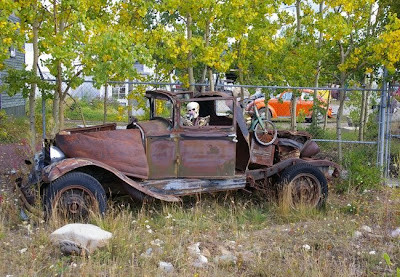 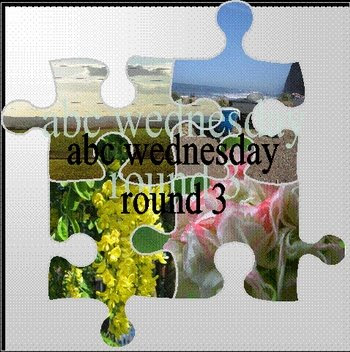 I must have been paying close attention during Year Nine biology classes when I was at St Joseph’s College, North Point, in the Himalayan town of Darjeeling - because I remember that the "ilium" is the large broad bone forming the upper part of each half of the pelvis.
Just before I flew out of Whitehorse, on my return to Melbourne, Margaret Goodwin of Yukon Tourism told me she knew of an unusual sight that I would definitely like to photograph. But, no, she wouldn’t reveal what it was. 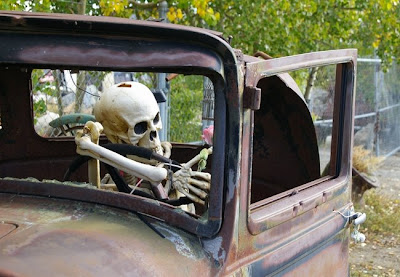 She just said I would know what it was as soon as we saw it. And she was absolutely right. As soon as I saw this skeleton, artfully arranged in the driver’s seat of a rusty old car, I had to jump out with both my cameras.
It was the little details that really made me smile - the artificial flower, and the carefully arranged necklace. It seems the property (and the car) belong to a local stonemason, and I couldn’t help but make a suggestion for him. 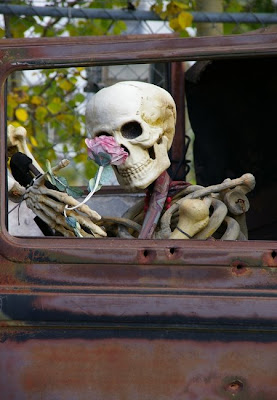 If he ever put a tombstone beside the car, he could engrave the words "Rust in peace". I’m not sure if the owner has ever needed security to patrol his premises - but if the need should ever arise, he can rely on his skeleton staff instead.
And if you want to drive a vintage car across the Yukon, here’s a valuable lesson. Use a map or GPS, because as you can see by this photograph, it’s a lot better than, er, dead reckoning. 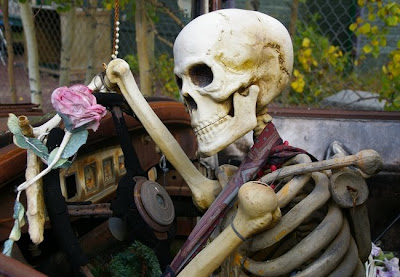 For the home of ABC Wednesday, go to Mrs Nesbitt's Place.
Posted by david mcmahon at 3:30 AM

Blimey, what a sight. Rust in piece would be the perfect advert for his masonry skills. Fabulous as usual David.

Rust in peace. Rust in beauty.

David, that reminds me a bit of the car from which we retrieved our infamous dilapidated door of opportunity.

And speaking of ilia and phalanges and tarsals and metatarsals and fibiae and tibulae, my biology teacher drummed the name of every bone of the body into my thick cranium.

What an 'I'gnominious rusting place for his ilia! : )

This one is amusing. I AM smiling, and not rolling my eyes. The pictures are hilarious.

Reminds me of my studies in anatomy. We had craniums from India. Bought cheaply I was told. Nowadays it is for some reason plastic...

I am suffering from excessive *groan*ing. I really do feel sorry for your kids!

This is a very unusual sight! And well remembered - ilium. Little known bone.

Great shots. And puns. Yes I have to admit, and puns.

I can't possibly top "rust in peace." What a sight/site to behold, I'm sure!

Where do you find these pictures? It is quite amazing the stuff you come across. Its not the type of thing you would see in a life time & yet YOU find it!
Brilliant pictures!

I don't what I enjoyed more, your photos or commentary. Either way they both gave me a chuckle here tonight.

Oh my gosh, that creeped me out! I am not scared of skeletons per se, but if I am walking or driving and see that skeleton inside a rusted car (with a flower), that might cause me a shriek. =)

My "I" picture is posted here. Happy Wednesday!

you see, this is a typical example of what happens as the result of you male types not stopping to ask for directions.

What fun! I'm guessing the owner is both ready for Halloween and giving a careful warning about the dangers of careless driving.

Yes, the decorations on the skeleton are very special! Someone had a lot of fun with that, besides you! :)

And on my return to Blogland, why am I not surprised to find a Skeleton Crew on board the SS Authorblog? I've missed you!
Sandi

By his age I think he should retake his driving test. Fun and inventive as always.

I love the photos, what a great I posting for ABC Wednesday.

Is that skeleton giving the thumbs up?

Ha! Those shots really made me smile.

Fantastically creative! Love that shot... What a find.

LOL this could have been me if I had stayed in London!

That is so funny, wonderful series of photos for ABC. Really great post.I did my first ABC post today and I don't think I did it right.

A memorable "I" post for sure - "rust in peace" will be remembered by bloggers around the world for a long time.

how many more puns could you come up with for this one. She was right about an unusual sight. I would have been jumping out of the car camera in hand too. I only iwsh i could have seen it in person. But to pictures are great, and your story is so funny! Thanks for sharing!

This is vintage you, David, I love it.

Well, David, I am glad you have solved the problem for us once and for all, of where did Elvis really get to!

David: What a special post and I would have stopped for some photos.

Don't you just love some people's humour? Yours included David!

Gold! I have to think 'only in America'! Not that we lack our quota of rusty jalopies in Australia but I've never heard of one containing a skeleton!

Betcha' didn't think I'd find this one, huh?

Hmm---gives me an idea for the upcoming "official" halloween holiday!

My cousin's a coroner, so he should have a few bones I could borrow, as long as I put 'em back in the right place again...!

Really nice and creative. Thanks for a little humor in my day.

Hilarious! Great images.. no bones about it. ;)