Which Way Now, Your Majesty? 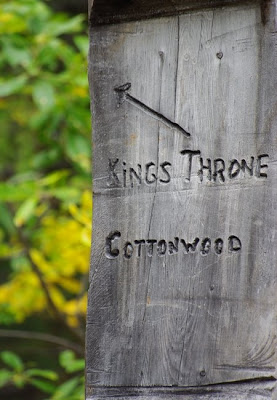 The king was in his counting house, counting out his money. I saw this signpost, and thought it was quite funny. Okay, that's enough of the nursery rhymes, but you get the idea.
This shot was taken during a hike in Kluane National Park. No, there is no royal family there - this sign just points the way to two different hiking paths. Go left to King's Throne, or you can go right to Cottonwood.
Further up the track, I saw this other sign carved on the bark of a tree - and so I just had to get a shot of the message, while trying to include some of the vivid fall colour on the hillside.
There is another reason I took this shot. We had four Dutch hikers as our companions that day and I was able to point out to them that the "crown" symbol above the letter "I" actually looked exactly like the symbol in the corporate logo of KLM, the Dutch airline. 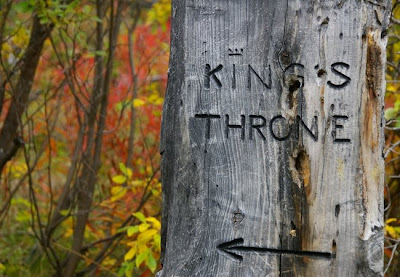 (The Odd Shots concept came from Katney. Say "G'day" to her.)
Posted by david mcmahon at 3:00 AM

What a unique way of pointing the way!

I thought it might be the way to the outhouse! LOL!

Did they all USE the king's throne!

Someone with a good carving knife, and the background makes it art. You would be the artist's assistant, David. Hope you were well paid, it's a grand job.
Sandi

It DOES look like the KLM symbol, but I'm so glad you got the autumn foliage in the shot. B.E.A.U.T.I.F.U.L!!!

I was thinking along the lines of what the rest of 'em were thinking - the king's throne. Oh, come on, we have to laugh at kings and make fun of their accoutrements, right? It makes us feel better about their being no counting house on our property!

Definitely unique so that makes it odd indeed!

A wordy oddshot. Autumn colours are my favourite to photograph, though not mt favourite season.

David: I like the way on the second sign had the I dotted with a crown, really neat signs.

For sure you weren't barKING up the wrong tree.